Hello SixPrizes members! It’s Christian again with another article. This time, I am writing about the Card Of The Day! It is my first Card of the Day article, so be take it easy on me. Today, I will be talking about a card that has not sees any play since the release of HS Triumphant Set. This card is called Magmortar TM.

This Pokémon appeared in the Pokémon show during the Diamond and Pear series. In the game, Magmar would evolve into this Pokémon, if it held a Magmarizer when traded. Cool isn’t it? The card appeared in the Mysterious Treasures Set back in 2007. The card seemed okay, in my point of view; however, it was not a playable card. Magmortar LV.X was a great card.

I started playing about three months ago, so I am assuming that the card had some huge success in some decks. As the years go by, Magmortar did not make the cut for playable cards. Fire decks are quite good in this current format because of its heavy hitters and its aggressive nature, in terms of playability.

Reshiphlosion, for example, made it at the list of top tier decks because of Typhlosion Prime, using Afterburner, and Reshiram BW, using Outrage and Blue Flare attack. Because of this, Magmortar did not see the light of day.

Magmortar has 100 HP, which was quite common for some Stage One Pokémon. Unfortunately, Water Decks started to become a bit more common, especially with Emerging Powers and Noble Victories Set. Magmortar would be considered live bait in the game because of its weakness in water attacks. Having two Retreat Cost was also another downside in the game. Even Dodrio UD won’t be able to help it.

People could actually build a rogue deck with Magmortar. I knew somebody who build the exact same deck. The deck consisted of Emboar BW 20, Victini NV 98 (from the new set Noble Victories), and Reshiram BW. Here is the decklist with my own play style:

The deck is quite simple to play. Magmortar would be the main disruptor of the deck. The deck must setup Emboar BW (Ability – “Inferno Fandango”), then attach as many R Energy to Magmortar. Reshiram would be the secondary attacker just using “Blue Flare” or “Outrage”. It’s like a Reshiboar Deck, with a Magmortar twist. With Energy Retrieval and Fisherman, this deck would be somewhat unstoppable.

Imagine having to discard all the important and necessary cards in your opponent’s deck. It would be unfortunate for them, of course. Victini NV 98 allowed the players to reflip their coins, that way he or she would not have to discard all of Magmortar’s attached R Energies.

It seemed quite solid and consistent; however, this deck is weak to water type Pokémon (Feraligatr, Floatzel, Kyurem, Samurott, etc.). There might be some cards in the new set Noble Victories, but in terms of playability, it is still not going to work.

If I was to rate this, I would rate this card 6/10, 6 being fair. Milling the opponent’s deck is a great disruption; however, it is not a great when it comes to playing in Battle Roads, Regionals, City Championships, and even Worlds. Magmortar may still work in rogue decks, or even fun decks, but in tournaments, it would not replace any important cards. Hope you enjoyed my Card of the Day! Happy playing, boys and girls! 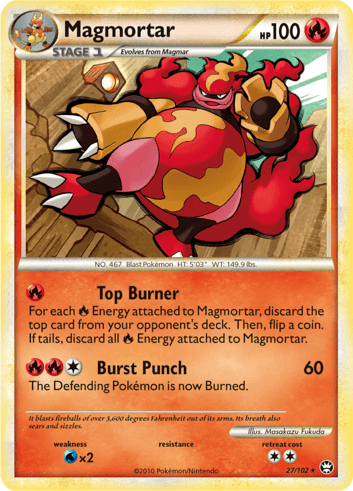