Hey all! It’s been a while since I’ve written, but now I’ve got yet another special Card of the Day for you! Hope it’s worth the wait! Today’s double feature, requested by baby_mario, is on two Axews – BW Promos 16 & 26. Let’s get to it!

So they’re very much alike. But at a glance, the first of the two cards (henceforth referred to as Axew 16) is more appealing because of the big 50 on the right hand side.

That’s right. Dragon Rage does 50 damage for just a DCE. And he’s a Basic too! OMG! Have we discovered the next great donk Pokémon?

Unfortunately, the extra text makes Axew much less playable. It states, “Flip 2 coins. If either of them is tails, this attack does nothing.” That means that the attack will only work 1/4 of the time. In other words, he has a 75% chance of failure, which makes it likely that he’ll be KO’d before he gets to attack. That’s basically handing your opponent an easy prize as well as wasting one of your DCE’s.

Even with the release of Fliptini, Axew 16 will still be pretty bad. Sure, it lets you re-flip for Dragon Rage, boosting your success rate. But you’ll still only be attacking 43.75% of the time, which is not good enough in my opinion. If you want a donk Pokémon in the vein of this Axew, go with Victini NV 43 (which, coincidentally, is one of the subjects of my last review!). It does 120 damage with the same success rate, meaning it’ll 1HKO a much wider range of Pokémon than Axew can.

Overall, Axew 16 is not worth playing because of its low HP and low success rate. He falls short of “playable,” meriting just 4/10 (Subpar).

The next Axew has a slightly different attack, for the same CC cost. It’s called Big Bite, and does a fairly overpriced 20 damage. The card also says that “The Defending Pokémon can’t retreat during your opponent’s next turn.”

Does Big Bite’s effect remind you of any card in particular? Yep, it’s the same as Spinarak HS’s Spider Web attack. Spinarak provides a fun locking option in any Vileplume deck. You can drag up bulky Bench-sitters with a card like Bellsprout TM, then keep them from retreating with your Spinarak. Spider Web can also be utilized to lock a Pokémon that can’t do damage, like Cleffa HS.

However, Axew’s attack has the added bonus of doing 20 damage, whereas Spinarak does no damage at all. This can be good, but at the same time means the lock will eventually be broken when the Defending Pokémon gets Knocked Out.

I’d personally use Spinarak over Axew because it keeps the lock in place indefinitely. In addition, it’s a Grass type, so it’s searchable with Sunflora HS, which is used in some Vileplume decks. The CC cost also means that you’ll either spend a valuable DCE on Axew or have to power him up in two attachments, neither of which is optimal.

So, in the end, Axew is outclassed by another, better card in the format, and it, like its rage-filled cousin, is Subpar (4/10).

Both these cards aren’t that great, and I’d only consider using them if I, for some strange reason, decided to make a deck with Haxorus. The Axews are cute, and that’s about it.

That’s all for today! Remember to rate and comment below. Thanks for reading! 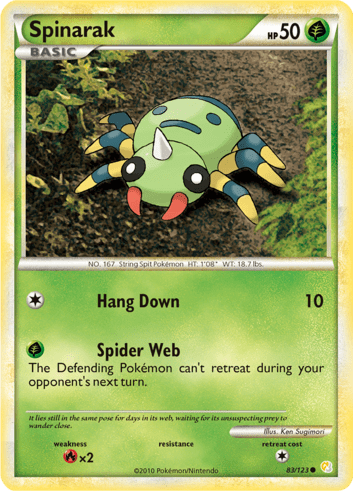