When Noble Victories first came out, many were excited at the prospect of Archeops, a Pokémon which prevents the opponent from evolving any Pokémon in play from their hand with its Poké-Power “Ancient Power.” Unfortunately, many were dismayed upon discovering the new fossil engine of getting its Stage 1, Archen, in play. Archen can only be placed on the bench with the effect of Plume Fossil, which states that only if you find an Archen in the last seven cards at the bottom of your deck can you put it on your bench.

With only four Archen available and the possibility of some being prized, Archeops seems nearly impossible to get, right? WRONG! When I finally decided to build Archeops, I thought it would be a lost cause, but I had to try. I was genuinely surprised at how easy it was to get it out. Here’s the deck I came up with.

This deck’s strategy is three-fold: lock out evolutions with Archeops, spread damage with Kyurem, and devolve opponent’s Pokémon with Jirachi if needed. While this may seem simple, this deck can be quite complicated to play. Nevertheless, once you learn to play this deck right, it will beat almost every deck that relies on evolutions.

pokemon-paradijs.comThe plan is to get Archeops out as quickly as possible. Though this can be difficult due to an annoying fossil engine, it’s much more likely than you might think. With four Plume Fossil and four Junk Arm, you can search for Archen up to 8 times during one turn.

It’s way too complicated to know the exact probability of getting an Archen, but after playing a lot of games with this deck, I can assure you that it isn’t as hard as one might think. I won’t lie; it’s crushing every time you fail a Plume Fossil, but don’t be dismayed.

Even if you get your Archen late in the game, with Jirachi to devolve the Pokémon that your opponent has already set up, you will really only need one powered-up Kyurem to win, because most evolution decks can’t do much damage with the basics. Once you have your Archen simply Communicate for an Archeops.

While you’re Junk Arm-ing, Oaks-ing, and Plume Fossil-ing away, you should be attaching W Energy to a Kyurem (I prefer to use the DCE as a switch for when your Archeops gets Catchered up — because it will!). Once you’ve attached that dreadful two Water and one Colourless Energy, you can use Glaciate to do 30 damage to every one of your opponent’s Pokémon. Glaciate will Knock Out almost every unevolved Basic in the game after two attacks, so if you’ve already blocked evolution your chances are pretty good.

pokebeach.comSay your Kyurem gets Knocked Out, and this will probably happen. At this point I would definitely take note of Jirachi, which has the ability to devolve Pokémon one evolution stage for each Energy attached to it with its attack, “Time Hollow.” Time Hollow requires one P Energy, but after that you can attach DCE to devolve three Pokémon at once.

Jirachi also has the ability Stardust Song, which allows you to flip three coins and for each heads, take a P Energy from your discard and attach it to Jirachi. For this reason, I definitely would recommend Junk Arm-ing away your P Energy, for it’s pretty likely that you’ll get the one Psychic you need with 3 coin flips.

Once you have Jirachi ready, use it to devolve evolved Pokémon that your opponent has had time to set up. You’ll devolve Pokémon for two reasons, either you didn’t get Archeops out soon enough and you have to get rid of those evolutions which are already set up. Chances are, they used Rare Candy and they rarely have more in hand to evolve again. You can also devolve for the knockout, which is a hilarious way to win the game. If you’ve Glaciated three times, adding up to 90 damage on…say… a 140 HP Typhlosion Prime, you can reduce it to a Quilava which only has 80 HP, thereby Knocking it Out.

I should make a point to say — DON’T USE JIRACHI UNLESS YOU HAVE ARCHEOPS OUT. Jirachi sends the highest evolution to the opponent’s hand. Unless you’re careful to have Archeops out, the opponent will simply lay the evolution back down on the following turn. The only exception is if you will get a knockout due to Kyurem’s Glaciate which may have already placed damage on the opponent’s Pokémon or for early game disruption on a Rare Candied Pokémon.

This is the worst part of this deck, you pretty much autolose to Zekrom every time. There’s nothing to devolve with Jirachi and Archeops is pointless. There’s no Energy acceleration for Kyurem which makes it way to slow to even Outrage or Glaciate Pachirisu or Shaymin. You will lose, nearly every single time.

Against the emerging Zekrom Eels, you have a much better chance because the eel-engine can be stopped with Archeops. But you’ll be incredibly vulnerable against Catcher, which Zekrom decks tend to run a lot of. Since they can quickly one-hit your Archeops, your chances still tend to be slim. Sorry, it’s just the way it is.

pokemon-paradijs.comI’ve had some trouble against these decks simply because of their speed. But often times it was because I had horrible luck and had three Archen prized, or couldn’t draw Plume Fossil. But most of the time, you should be able to get a turn two or three Archeops and stop the opponent from getting Typhlosion, which also makes their Cyndaquil quite vulnerable to Glaciate and shuts down their engine.

Even if they do get their Typhlosion out, one good turn with Jirachi will stop them from powering up Reshiram. Reshiram is extremely vulnerable to Kyurem due to weakness, so if you can set up quickly, you’re sure to win.

If you can’t set up your Archeops then you will have some trouble, but Kyrachiops still works in the late game. You may sacrifice as many as three or 4 Prizes before you get set up, but once you do, you have a great chance of winning.

I’m not sure why I’ve played so favorably against this deck, but I’ve never lost out of the many games I’ve played. The only time you’ll have trouble is when they get their Vileplume out, locking your use of Trainers — notably Plume Fossil — before you can get Archeops out. When this happens, simply buy time with your Kyurem; allow them to get Knocked Out.

Use Twins if needed to set up a Jirachi, which can devolve their Vileplume, and proceed the next turn to use Plume Fossil to get your Archeops, preventing them from evolving. Gloom ruins this strategy, since the opponent will be able to evolve next turn (Jirachi’s Time Hollow is an attack so it will end your turn).

Even then, using a Gloom requires three full turns to get to Vileplume, against Vanillock; it’s much more likely for your opponent to Communicate Gloom for a Vileplume. Trust me, you won’t have much trouble with this deck.

A Ross Deck requires so many evolutions to be effective; you’ll likely get Archeops out far before they get fully set up. Plus, Donphan is double-weak to Kyurem. This goes the same for Gothitelle/Reuniclus. You’ll have trouble if you can’t get Archeops out, but don’t scoop if you get trainer locked, stick through to the end and Jirachi if needed.

Again, with so many evolutions, it’s unlikely that you’ll lose. Use Jirachi’s Time Hollow if you have any trouble.

Seeker – I’ve only had to use these against a Chandelure deck, but it’s a thought.

Shaymin UL – Every once and a while you need to switch around Energy.

Energy Exchanger or Energy Switch – It sucks when you need a Water energy to Glaciate, but all you have is a Psychic.

Energy Retrieval/Revive – Often your Kyurem and the Energy attached gets stuck in the discard pile while you’re setting up Archeops. I usually use Super Rod to solve this problem, but if you ever need some urgent W Energy you can use Energy Retrieval. Again, these are just some possible ideas.

The opponent would no longer be able to Rare Candy to their evolutions — you would be nearly unbeatable. But ultimately, this just won’t happen. By adding Vileplume, you sacrifice the consistency of the deck. Adding Vileplume will ruin it.

The biggest downside to this deck is that it’s more likely to lose against anything that runs basic attackers like Kyurem, Zekrom, Reshiram, Cobalion, etc. But when you look at the matchups, you have some good odds of wreaking the engines supporting these basic attackers. Every deck has bad matchups, I built Kyrachiops to counter Vanillock, but lost to ZPST. Sometimes your luck will be bad, but more often than not you’ll win.

Have some faith! Vote for Archeops and evolution stops! 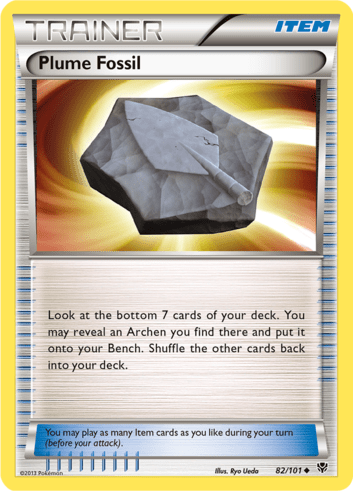