Evening chaps; it seems that there is nothing scheduled on the front page right now, so I thought I’d just give a quick report of a tourney my local league had today in Manchester, UK. It was nothing official for CPs or Rating score, but I think you were able to pick up a competing point that might go toward being able to play at Nationals.

A quick reminder of who I am if you can’t remember back to “Stranger in a Stranger Land” Regionals report from April: I’m Alex Holdway, currently sitting pretty at 5th in UK Masters, after my 3rd place States place in Nottingham a fortnight ago.

There was actually a bit of confusion over the event itself: up until about three days ago, everyone who was planning to go thought it did have points available, so some other players who were not local to Manchester were popping up for the day. However, it all soon kicked off it and was deemed that it wasn’t an official Cities and just a local tourney. Boooooo for me (and others).

Anyway, after knowing it was all for a bit of fun I decided to put ZPST aside for one week and reassembled a deck I played for a while over in the States last year at league to some mild success, now with Noble Victories additions: SharTini.

I actually haven’t seen much discussion about the deck recently, so I guess it could kind of also be a rogue deck review, something different for the front page!

Sharpedo is this decks main player. His attack “Strip Bare” has an attack that does 20 damage for a single Darkness and has a flippy effect. For two flips, if both are heads, your opponent discards their hand. And if I can quote Dane Carlson on this one: “WHAT?! Their whole hand?! That’s amazing!”

Of course, you have to flip two heads, which under normal circumstances has only a 25% of succeeding and with the shark’s 90 HP, it won’t last long if your opponent can get set up. This is where the next monster comes in.

Everyone knows about ‘Fliptini’; this little guy lets you re-flip any coins once per turn for your Pokémon’s attacks. It has been talked about being used with Vanilluxe, but I have paired it with Sharpedo. A “Victory Star” power increases the chances of a successful Strip Bare from 25% to 43.75%, just under 50:50.

Slowking is the third piece of the puzzle and the final part of the lock. It has a Poké-Power that allows the player to view the top three cards of either player’s deck and re-order them as you choose.

To a lesser extent it can change your topdecks when in a tight spot but is mainly used to prevent your opponent drawing a “Professor Oak’s New Theory” or “Professor Juniper” etc. to replenish their hand.

Cincinno is used at the back up attacker after a successful Strip Bare to dish out a cheap 100 damage for just a Double Colorless Energy. The DCE also comes in handy for Sharpedo’s second attack, Rage.

I hadn’t tested the deck much only having made it the night before the tournament so went safe with my lines, taking most of them out of my ZPST deck. I switched the “Sage’s Training” with “Cheren” and added some “Pokémon Communication”. After the report, I’ll explain what I would change and why.

The tournament was going to be a 45-minute best-of-three with four rounds, and the player with the best record taking the 1st Place Serperior Tin.

pokebeach.comI’ve played Max a lot before at Battle Roads and League, and he placed 2nd at the Nottingham States two weeks ago. He’s a solid player with a very tight Goth list, so I was slightly concerned.

So Game 1 started and I went first, getting the perfect bench and active of two Carvanha, two Mincinno, one Slowpoke and one Victini turn one. I had a Slowpoke active, but Max was in a tricky spot with a Chansey active. After several turns of me controlling his topdeck and him having hardly any Supporters at all, Max scoops about 15 minutes in.

In Game 2, we both have slow set-ups and I don’t manage to hit double heads on Strip Bare for a long time. Also, not taking a prize for a long time never game him the chance to launch into Twins and get fully set up. It bottles down to Max slowly KOing all my Sharpedo, but I don’t scoop to ensure that it goes to time in Game 3.

In the final game, I go first and after 5 minutes or so, time is called. Max once again started with Chansey and I hit double heads very early meaning that on Turn 3-of time, I could get a KO with Cinccino and take the win.

Darren is another local guy who I’ve played before, this time at Nottingham States and I managed to beat him there so I’m sure he wanted to get his revenge.

This first game started terribly for me as Darren’s opening hand has his only “Tropischer Strand” in the deck so I know that even with a double heads he can use its effect to draw seven on his next turn. Well, this is exactly what happens turn after turn one and I hope that I might have the chance to deck him out until I whiff on the flips two turns in a row. He can get fully set up and I let him KO all my ‘Mons for time.

pokebeach.comThe second game is a short one as I have the perfect start, Darren misses his Twins and I get the Turn 2 Slowking and Strip Bare double heads. GG.

In Game 3, Darren starts and I don’t like the sound of that as I haven’t won yet going second. He has a slow start, and I’m chipping away 20 damage to prevent him going into Twins but also whiffing on the discard effect.

I keep up with him on the prize race, never letting him be behind and once again, time is called and on Turn 3 and I take a KO with Cinccino to seal the deal.

Russell’s a top bloke from League who I played at a Battle Roads in the Autumn and again beat. Once again I’m sure he’d want to get his revenge.

Game 1 I run pretty well, getting a full bench T1 and a key Strip Bare discard about four turns in. From here on in I’m able to take prizes with Cinccino, switching back into Sharpedo when needs must. I take all my Prizes and we’re onto Game 2. I found this a pretty tough matchup as Cinccino finds it tough to get 1HKOs and Sharpedo is just general bait.

Second time around Russell runs like God and gets two Typhlosion out very fast. We were actually talking together beforehand and decided that’s the best way for him to get a win. I make him take all 6 Prizes and we’re going to the last one.

pokebeach.comThis last game it’s pretty tight on both sides of the board and I made a pretty big misplay Catcher-ing a Typhlosion and trying to KO it when I should’ve attempted the Strip Bare. I manage to pry back and we go to time, I get ahead on prizes and am up to 3-0.

It looks like at this stage there’s only one other player on 3-0 so I know that if I want to make the day worth it I just have to win the last matchup.

Oh lucky me, four rounds against two Goth and two Reshi. I heard from the TO that Mark was a relatively new player, but he managed to do well with his list so good luck to the guy.

To start I run unbelievably and he has to check all of my cards to see what they do, so that confirmed he was new to the game. Think he played other TCGs though as he called the discard pile the “Grave” (???). Anyway, about three turns in, I hit the double heads and a few more later he scoops to game two after finding no way back.

Game 2 goes more in his favor based on the fact that I just couldn’t get the double heads. I even wasted some Dual Balls just to hope and get double tails and even out on the attack. So he gets two Typhlosions set up and I just make him take all his prizes and we’re onto the final game. The tin was in sight!

The last game of the day went miserably for me: I still couldn’t hit any heads, Mark kept Catcher-ing my Slowking and I never had the “Switch” to get it out the active.

The key part of the game was when I finally hit the Strip Bare with a damaged Sharpedo and I knew that his next card was a Typhlosion that he could not play. Mark used “Outrage” to KO the Sharpedo and drew “Rare Candy” on his prize to get 2 Typhlo set up and keep his energy flowing.

Time was eventually called and I ran out resources and Mark was ahead after Turn 3. Good game.

So the tournament was over and I placed 2nd, just missing out on the Star Prize! Bit gutting, but you can’t win them all!

Looking back on the deck, I would take out Cleffa as it wasn’t used once and also take out a Dual Ball. I think the deck would work well with Lost Remover and some recovery in the terms of Flower Shop Lady or Super Rod, but I guess that’s for another time. Finally, I would make the lines 4-4 Sharpedo, 2-2 Cincinno as I was finding it tough if either Sharpedo or Carvanha were prized and my opponent would take easy prizes with them.

Well, thanks for reading and I hope you enjoyed the report and list. Be gentle and I will probably do some more testing to find out how I would do in other matchups (pretty sure ZPST is not great). 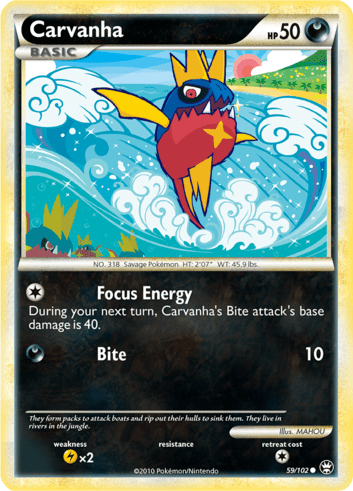