This is Innocent_Shine, and today we’re trying something possibly new with a Pokémon card analysis. We all know Gyarados, Magnezone, and Emboar; three power-house Pokémon. But they all had to come from somewhere small, as not every Basic can be Zekrom or Mewtwo. Despite the earlier stages hopefully seeing one turn of play maximum, we still worry about them because we don’t want just anything going in our decks.

Eelektrik NVI has been seeing quite a bit of play, and is a rare case of a Stage 1 being a focus where the Stage 2 is useless and thus ignored entirely. A perfect start to a discussion about early stages, don’t you think? It’s used for its Ability, Dynamotor, which allows you to take a Lightning Energy from your discard pile and attach it to any of your benched Pokémon without repercussion. It’s rather similar to Typhlosion Prime without the damage, but it lacks the flexibility to attach to the active.

This line has one very useful Eelektrik, one very ignorable Eelektross NVI, and two Tynamo – #38 and #39 – which is our focus. To decide between the two, there are several deciding factors. Its Retreat Cost, HP, and attack costs are the three most important. It’s rare for two Pokémon with the same name to have a different Weakness or Resistance from the other, in the current format.

The first thing that most people look at would be the HP. #38 has 40 HP, while #39 has 30. Both are far below ideal and are frustratingly easy targets to 1HKO early on. However, despite both being so low, that 10 HP is a huge difference. Both are Knocked Out by almost everything, most notably Yanmega Prime. But the big difference is that Kyurem NVI and Tyrogue HS can take out #39 without assistance from PlusPower or any other cards that add damage. This is a definite point in #38’s direction.

When considering the attack costs, you want to think about whether you have Energy of that Pokémon’s type. A supporting Pokémon that remains on the bench all game will not always be compatible unless it’s meant for Energy acceleration. In this case, you should have a deck packed with Lightning Energy and be able to attack with both Tynamo. #39 has a single Colorless cost for vanilla 10 damage, pretty standard. #38, for one Lightning, does 10 also, but with a Paralysis flip.

More than likely you will only have Lightning Energy in this deck (maybe Rescue or DCE, but nothing that you would waste to do 10 damage with Tynamo), so #38 is still better here.

One last thing to cover, and that’s the Retreat Cost. #38 has your average cost of one. #39 is special here, having free retreat. In most cases, the positive would go to #39 here, but recall Eelektrik’s Ability. It takes Lightning Energy from the discard pile. And where does Energy go after you use it to retreat? Yep.

Now, that doesn’t automatically make Tynamo #38’s Retreat Cost as good or better, as you still have to have it in your hand. This is where opinion hits its peak between these two. You can get that Energy out of the discard soon after with Eelektrik, but it makes retreating Tynamo and attacking with a new Pokémon on the first turn impossible. This is an example of the evolution changing the circumstances on what statistics may make a card better.

Other options to consider, specifically on the Retreat Cost here, is what else might be in your deck, and maybe even what’s in your meta. Since there are many different Eelektrik decks and many different metas, this can’t be generalized. But does your list run Cleffa? Tyrogue? Maybe an Emolga tech, or anything else that has free reteat? You may not need #39’s little boost. Or maybe your deck has no other free retreaters, but half the decks at local tournaments are Kyurem spread and you need that 40 HP to survive. A common mix in tournaments has been two or three of #38 with only one #39.

My opinion? I like #38 and will choose it every time in a deck that takes Lightning Energy out of the discard. Several Card of the Days have been bringing ratings back, yeah? Well, being basics that evolve into something stronger, these are hard to rate. I have to say #38 is ranked just above Oddish, while #39 is about even with Solosis. What do you think? Feel free to say what you think about Tynamo and this type of CotD in the comments. 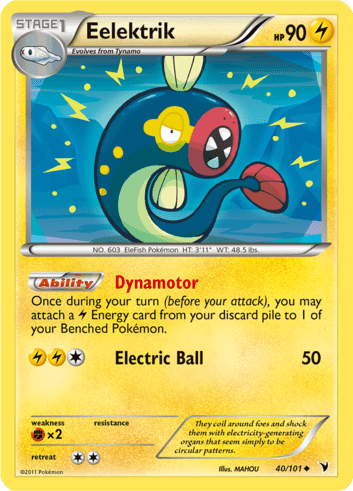