pokemon-paradijs.comRecently, AT&T tried to buy T-Mobile. However, the government essentially blocked this attempt, since it would hurt enterprise.[1] I feel that this is a similar situation that Conkeldurr decks, specifically Conkeldurr/Electrode Prime decks, are facing. But more on that later. Let’s look at the card itself…

…after the pre-evolutions. Timburr BLW 59 has a very standard 1 for 10 and 2 for 20 attack set. Timburr gets a nice 70 HP, but also a poor Retreat of 2. The other Timburr from Black & White (Timburr BLW 58) exchanges -1 Retreat for -10 HP. It also has only one attack, which requires two Fighting Energy. Normally, requiring two of the same type of Energy as opposed to a colored Energy and a C Energy is annoying, but if you’re just running Fighting Energy, it doesn’t matter that much.

The attack does 10 more damage than the other Timburr’s Pound. Finally, we have Timburr NV, which has the worse of the other two (only one attack, 60 HP, and a Retreat of 2); however, its attack could do 20 damage for a single Energy.

Overall, I’d go with Timburr BW 59, since the extra 10 HP makes it a little tougher and less susceptible to Cursed Shadow and Glaciate KOs. You can also attack from turn one if you have to, and you can do 20 more damage if you whiff on an evolution T1 and T2. Also, the Retreat of 2 isn’t crippling, since this card will most likely be your main attacker.

Two Gurdurr have come out, one from Black & White, and one from Noble Victories. Gurdurr BLW has a slightly low 80 HP and a meh 2 Retreat. Bulk Up is so-so. While essentially 40 damage is nice, it is only 20 damage if you evolve into Conkeldurr next turn. Pound does a vanilla 60 damage for three Energy, but cannot use DCE.

pokemon-paradijs.comGurdurr NVI shares the slightly low 80 HP, but also has a bad Retreat of 3. Strength is only okay, as it is the same attack as Timburr BW 58. Pummel may work with DCE, but there is a chance it will do 20 less damage than the other Gurdurr’s Pound.

Neither Gurdurr is too great, but I’d prefer Gurdurr BLW. Pound is far better than Pummel, mainly since you most likely won’t be using DCE in a Conkeldurr deck. I’d say that Bulk Up and Strength are about as good, though. Finally, I’ll take the 2 Retreat over the 3 Retreat.

Now for the clown-nosed beast himself. 140 HP is nice, though only 10 more than the dragons’ HP. Discarding four Energy in order to Retreat is very annoying, but only if you have to Retreat him. Psychic Weakness, in my opinion, is the biggest downside to the card, or at least, it will be as I will explain soon (hold your Rapidash).

Craftmanship is the focal point of this card. You can boost Conkeldurr’s HP to very high levels. If you have four Fighting Energy attached (enough to fuel Top Down), this guy has 220 HP. You can tank in a way that would make Wailord proud. Four more Fighting Energy = 300 HP. Slap a Rocky Helmet on, and it’ll be a chore to get rid of Conkeldurr.

pokemon-paradijs.comHowever, there are downsides to this Pokémon. First, this card is very slow to set up, as it needs 4 Energy to attack and is a Stage 2. Even with just this downside, the card is only occasionally played.

Just as important is the downside that comes in a few months. That’s right: Mewtwo EX. Weakness to Psychic, coupled with the way the card works, makes Mewtwo EX this card’s worst nightmare. If Conkeldurr has at least three Fighting Energy attached, X-Ball is a 1HKO. If Conkeldurr has fewer than six Fighting Energy attached, Psydrive is a 1HKO. Additionally, even if Mewtwo EX doesn’t become the BDIF, there is a high probability that it will become a tech in for several decks. It’s easy to see the problem here.

One deck that some have used is Conkeldurr/Electrode Prime. This deck uses Electrode Prime to load Conkeldurr with Fighting Energy, allowing him to tank. It’s pretty cool, but it seems to fit into the Rogue category.

Even though Conkeldurr/Electrode Prime decks are somewhat effective now, Mewtwo EX will put a stop to this “merger.” However, unlike AT&T’s attempt to buy T-Mobile, this event will not promote creativity, but hinder it. With powerful Basics around, only one or two decks based around the plethora of cool new Evolved Pokémon are viable. The way it works right now, Conkeldurr/Electrode Prime is not one of them.

Perhaps if there is some sort of new draw engine or other new effect that boosts Stage 2s, such decks would be viable. As is, Conkeldurr is a very risky play. With Mewtwo EX around, Conkeldurr may be a bad play even with Stage 2 support.

Perhaps at League or something with a “no-EX” or “no big Basics” rule, this card would be fun, but in the current format:

Thoughts, questions, or anything else? Feel free to add a comment. 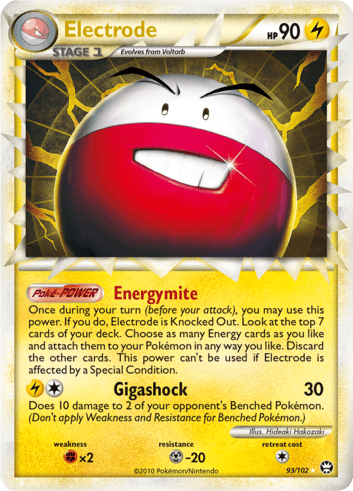