Hello SixPrizes I’m Starmetroid and today I’m presenting a new deck I recently made. I started playing competitive last summer and in my short career I’ve managed to scrub out at my first BR and come back to take second at my first Cites. I’ve been following SixPrizes for a while and after making a deck that is original I wanted to share it to give something back to the community. The deck is called Legendary Bacon, which is based around my favorite card(s) Rayquaza & Deoxys LEGEND.

RDL is card I’ve loved as soon as I got a play set, but I could never really use it effectively. I first made RDL turbo (a slightly modified version of the list I found on The Deck Out using both Ninetales to charge RDL) and through dumb luck had some mild success at League and a lot of fun with it, however I couldn’t get over Reshiram due to its amazing speed so I had to put it away.

I tried putting it into other decks like Reshiram/Zekrom/Electrode Prime with no success, and I don’t own enough Magnezone Primes to make a deck around it.

I gave up on RDL for a while and made Club Zekrom, and managed to get second at a Cities but the deck still struggled against Trainer locking decks which are huge in my area.

However over the holidays I was mulling over how to made a deck that could compete with Zekrom / Reshiram decks and have a good match up against Trainer Locking decks, so I turned to Reshiboar.

Reshiboar can run RDL and Emboar BLW 19 (Bad Boar) to get over the Truth and still have its own Reshiram to brainlessly prize race with the other Digimon decks. I decided to have a stronger focus on RDL for this deck and was forced to give up some things I didn’t want to like Eviolite to save space. This is the list I came up with.

pokemon-paradijs.comIn testing the deck was inconsistent, it could sometimes crank out an RDL by turn 3 and Ozone Buster every following turn and take 6 Prizes in 5 turns, but there were games where it would start completely dead or just too slow to make it. I had fun with the deck, but I knew I wouldn’t go anywhere with it in a tournament because one bad start could knock me out of the tournament.

N gave this list a lot of trouble, as it has with all Reshiboar. N is a very popular card now so this was a problem.

I won’t bother with the card explanations here as this deck wasn’t great to begin with.

I didn’t want to abandon the deck so I thought about how to boost consistency and decided to play around with the Twins count and bumped it up to 4. I then decided I might as well put in Vileplume UD to block all those Pokémon Catcher targeting my poor Emboar and the PlusPowers trying to get the Digimon over RDL. Vileplume also took less space then all the Item cards I had so this gave me some extra breathing room. This is my current list of the deck.

As you can see I decided to drop Reshiram altogether. I think if you use RDL you’ll find taking single prizes is pointless. I would drop a Collector for an extra Pichu, but I only have one Pichu at the moment.

N doesn’t mess this deck up as much as the last, although it is still a nuisance and can be a real pain when you have 2 Prizes left.

2-2 RDL: Obviously I need to max out on my main attacker. RDL is the only attacker in this deck unless you face a Metal deck, in which case Emboar would work.

3-2-2 Emboar: Three Tepig so I can bench two turn 1 and be able to evolve one after the other is killed. If you had two Tepig prized avoid benching the one until Trainer lock is up. Two Pignite are there so you can evolve to Emboar manually after the lock is up, and two Emboar so you don’t get you’re only 1 Prized or if you can’t get the lock up and the opponent kills one.

3-0-2 Vileplume: Three Oddish is for the same reason I have three Tepig, except you’ll be in more trouble if two are prized. Gloom is excluded as once I rare candy to the first Vileplume the second is irrelevant. Two Vileplume in case one is prized.

2 Cleffa: Cleffa is here to Eeeeeeek its heart out and die. It can Sleep stall a bit and it is a new hand that’s searchable off a Collector. It also has free retreat which is good.

1 Pichu: Another free retreater that can fill your bench with your two Oddish, two Tepig, and lone Cleffa.

4 Sage’s Training: They help fish out the cards you need without ditching the stuff in your hand. Energy will be disposable thanks to Fisherman and FSL can get Pokémon back in a bind.

4 PONT: Standard draw support for decks that don’t want to lose the contents of their hand.

4 Collector: They get your Basics, preferably on turn one. Also an early chance to check your deck for what’s in the prizes.

4 Twins: The major consistency crutch the last list didn’t have (the last list had one but one isn’t enough). Twins gets your Vileplume, then your Emboar, then your RDL and then Energy. RDL is also good at keep your opponent ahead in prizes so you can almost always use it.

2 Fisherman: These are here so you can Ozone Buster as much as you like.

1 Flower Shop Lady: If you happen to discard an important Pokémon or lose it in battle FSL has your back. Also if RDL dies while another piece is prized and you didn’t have a Rescue attached it’s almost GG.

3 Rare Candy: I only expect to use one per game, but being able to draw it without Twins and maybe Candy your Emboar first is great.

3 Pokémon Communication: Gets the Pokémon you need before the lock goes up.

1 Indigo Plateau: Makes your RDL even harder to kill. Tornadus EPO won’t be able to 1HKO you as Hurricane only hits for 160 and PlusPower is removed from the equation.

10 Fire: I found this to be a good number; in my games I’ve never needed more.

1 Rescue: It can be used to fulfil the Colorless cost and is the best way to retrieve a fallen Legend in Trainer lock.

Turn one you want to get out your two Oddish, Tepig, and have some babies on board. Collector and Pichu are your main tools for this.

pokemon-paradijs.comFrom here on you need to start setting up. Once your opponent takes a prize you have to set up before they get prize number 4. Twins will help immensely and once you have Vileplume you will probably be fine. Each turn you want to twins into another piece of your set up and then Eeeeeeek to try to get more without twins and sleep stall a bit.

Once you have everything set up you start attacking, if your opponent has taken at most 3 Prizes you’re in good shape. This is because your first RDL can attack, not get killed next turn due to 170 HP under Indigo Plateau and few thing even hitting for 140 in Item lock. Now the score is 4 to at least 3, on your next turn you attack again to bring it down to 2 to at least 3.

On your next turn your opponent should be able to kill your first RDL, bringing the score to 2 to at least 1. Now you just need to set up RDL one more time for game. If your opponent didn’t take 3 Prizes while you set up this is even easier as you get a turn to fodder up something. If they take 4 Prizes by your first attack then you would need to retreat for a second RDL to stay alive and that is just really hard to do.

If you look at the prizes analysis on every turn you will either have more prizes, or have an RDL waiting to be charged. This means you should always have access to Twins when you need it and whats more the opponent won’t be able to use Black Belt for a surprise KO.

Exceptions to this Strategy

Opposing Trainer Lock: If your opponent Trainer Locks then you should ignore your own lock almost entirely, only using it if you’ve set up and Emboar and the opponent hasn’t set up much at all.

Durant NVI: If you’re facing Durant go straight for the Pignite, he can energize himself and 1HKO Durant unless the Durant had an Eviolite and 2 Special M Energy. Evolve into Emboar if you get the chance and try to have a second Tepig or Baby on the bench so prevent Rotom UD from killing you and losing due to having no Pokémon on your bench.

Decks with Pokémon that have over 150 HP: First of all, if it’s a Legend then don’t play your Indigo Plateau. In this match up if they don’t use Reuniclus BLW you could tackle their 160+ Pokémon with Tepig for RDL to finish, if they do have Reuniclus then you may have to try to damage overload them, which may be doable. Overall these Pokémon are few and far between so you probably shouldn’t worry too much.

Metal Decks: You may find it more effective to use Emboar to attack if RDL cannot 1HKO their Pokémon.

Hydreigon NVI: This guy has a Psychic Resistance and can take an Ozone Buster to the face and survive. He also has the power to take out both your Oddish if your set up is sluggish. Here you either want to just Ozone Buster twice or soften it up with something from the Tepig line.

Reshiram: Serves as good fodder while setting up, can outrage or Blue Flare if needed. Use it if you’re afraid of steel type decks.

Reuniclus: I consider Reuniclus to be pointless if RDL will end the game in a few turns after setting up. Reuniclus also clogs up the deck and overall I don’t consider him to be worth it.

Bad Boar: This is something I may want to include myself; he has the ability to murder Hydreigon in a single hit and this deck is afraid of Hydreigon (and anything else that snipes/spreads but Hydreigon is more dangerous than others).

Rotom: There are 4 cards you run 2 copies of that you can’t afford to have prized: Vileplume, Emboar, and the top and bottom of RDL. Rotom can get these and could also attack if you need to soften something up.

In February the EX will be released and many will be incorporating them into their decks. I know I’ll be putting a Zekrom-EX and two Mewtwo EX into Club Zekrom but this deck most likely won’t use any. I really hope Mewtwo EX is super popular like it is hyped to be, as RDL will always 1HKO and take 3 Prizes for it, ending the game with two attacks. Other EX may pose a problem as they can take a hit and live. This shouldn’t be a huge issue as RDL can still 2HKO for 3 Prizes which isn’t bad.

I hope someone on SixPrizes will make a deck like this one and have some fun with it, I hope everyone enjoyed it. I welcome all comments and constructive criticism and appreciate it. At the very least we now have a deck that can use Twins on the turn it takes its last prize! 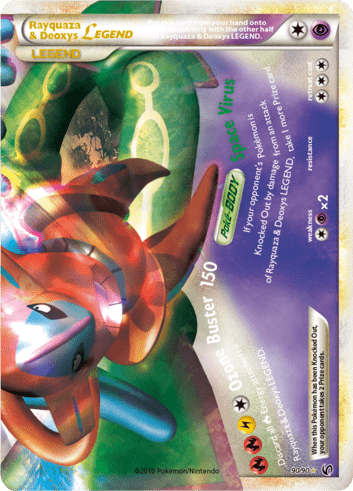