Hello fellow SixPrizers! I hope everyone had a good Christmas and New Year, and that everyone has a great 2012. I certainly think that Vanilluxe is going to have a great one, and that is what I am here to talk about. I will present you with two popular takes on the deck, and then show you an idea of my own. I hope you enjoy this article. Here is the first take on the deck:

pokemon-paradijs.comThis is a pretty standard list. Cryogonal is in there to help with your Magnezone and Truth matchups, as it allows you to drag up a Magnezone with no Energy on it or a Reuniclus off of the bench. The basic strategy is to set up Vanilluxe and Vileplume as fast as possible and then get Victini out.

Vanilluxe is your main attacker. Its attack, “Double Freeze,” allows you to flip 2 coins, and for each heads it does 40 damage. But wait, there’s more! If even 1 coin is heads the defending Pokémon is Paralyzed! That is a 75 percent chance, or with Fliptini in play, close to a 93 percent chance.

The idea is pretty simple: keep a Paralyze lock up using Vanilluxe and Victini, and then make sure that your opponent can’t do anything about it with Vileplume. Because you are likely to fall behind in prizes, you use Twins to set up most of the time. I have been able to set up a turn two Vanilluxe or Vileplume on a couple of instances, but not that often.

pokemon-paradijs.comThe strategy behind this deck is to use Mew Prime’s “See Off” to put a Vanilluxe in the Lost Zone on your first turn and start attacking with “Double Freeze” turn two if your first Mew survives that long. If it doesn’t, just stall until you can attach the Energy you need to attack. You then proceed to set up Vileplume to lock Trainer cards and lock your opponent by Paralyzing them every turn.

You want to swarm Mew using Rescue Energy so that if your opponent can answer your Mew by revenge KOing it, you will simply be able to resume the Paralyze lock. Use Victini to re-flip the coins you flip if you get a double tails on “Double Freeze.” Mew is easier to KO, but is faster and easier to swarm than Vanilluxe. It has its pros and cons, but the choice will boil down to the player’s playstyle.

This Pokémon has an Ability called “Victory Star,” that allows you to re-flip any coins you flip, as long as they were from an effect of an attack. This pairs perfectly with Vanilluxe and Vanillish’s attacks because they both Paralyze on a coin flip, and this is the only reason this Pokémon is in this deck.

This Pokémon has a Poké-Body, “Allergy Flower,” that makes it so that both players cannot play Trainer-Item cards. This makes it so that your opponent cannot play cards like Switch, PlusPower, Junk Arm, Pokémon Communication, Pokémon Communication and Rare Candy. This prevents them from playing Switch to get out of the paralyze special condition and PlusPower which allows Pokémon like Reshiram and Zekrom to 1HKO Vanilluxe.

You will still have problems with Pokémon like Rayquaza & Deoxys LEGEND, Magnezone Prime, Emboar BW 19, and any other Pokémon that can one shot you.

pokemon-paradijs.comThis Pokémon’s Ability called “Damage Swap,” allows you to move the damage counters on your side of the field around as you like during your turn. This gives your Vanilluxe the ability to survive hits from Pokémon like Reshiram and Zekrom. It fits well in this deck because you can stall behind Vanilluxe while you get it set up.

Your damage sponge. It can absorb 120 damage. With two of them and two Seekers, this gives you the ability to absorb up to 480 damage per game. That is probably more than your opponent can dish out while under Trainer lock and Paralyze.

Most of the Trainer/Supporter/Stadium cards are self explanatory, but here are some of the cards that aren’t.

I use a high count of this card because it is hard to get out evolutions under Trainer lock. This card helps a whole lot.

Allows you to pick up your Reshiram, which means you can absorb even more damage.

pokemon-paradijs.comThis deck relies on a whole lot of Trainer cards, so try to get Vileplume out as fast as you can. If you can get out Vileplume fast enough, they won’t be able to set up. But if they do manage to set up before you, that will give you access to Twins. Reshiram has Weakness to Water, so this should go in your favor. The only possible problem here is getting hit by a “Flare Destroy” from Typhlosion if you have no Energy in hand, because this deck runs a low Energy count.

This matchup is highly unfavorable unless you can get a T2 (turn 2) Vanilluxe or Vileplume. They will take 6 Prizes before you can get set up unless you can stop either the trainers or the attacking. But if you can get a T2 Vileplume, this should go well for you because they will have to manually attach all of their energy just to start attacking. In the situation that they do get attacking even under trainer lock, try to activate Twins. Allow them to take knockouts on Pokémon like Oddish or Solosis. This match could go either way.

These Pokémon are almost an auto-loss. It is possible to win through Reshiram, though. Activate a Pokémon that can take a hit from them, use Reuniclus to swap the damage from that Pokémon, power up Outrage, activate Reshiram, Outrage KO. Rinse and repeat.

Do not set up Vileplume. It is useless in this matchup. Unless you have Oddish, Gloom, and Vileplume in hand, do not bother. If you do have them in hand, go ahead because that just means that you can soak up 110 damage. That is all that Vileplume is good for in this match. Get out Vanilluxe and Reuniclus as fast as possible.

If you don’t 1HKO the Pokémon that they have active, chances are that either one player is going to deck out, time will be called, or you will get quadruple tails and your opponent will be able to attack until you manage to get the Paralyze lock back up, which should be next turn unless they 1HKO you or you get another four tails, both of which are very unlikely.

pokemon-paradijs.comThis could be favorable or unfavorable for you. You could get out an early Vileplume and Trainer lock your opponent out of Rare Candy and out of luck. Unless they have some unlikely way to get out magnezone under trainer lock or you just can’t get it up, you will probably loose because Magnezone can 1HKO Vanilluxe.

This will go in your favor if you can get a fast Vileplume and Reuniclus. Mainly because it is going to take a whole lot more than 60 or even 110 damage per turn to overwhelm your field with damage. Also, paralyzing them will keep them from retreating using Dodrio UD’s Poké-Body “Retreat Aid.” This will limit them to 30 damage per turn with “Cursed Shadow.” Also, do not let them get off a Burn and Confuse with “Eerie Glow,” as not being able to attack really hurts you.

This matchup is nearly an auto-loss. You cannot handle the sheer damage output of Kyurem. They will flood your field so fast you won’t know what hit you. Cobalion can 1HKO Vanilluxe. Unless they get a terrible start, you are probably going to loose.

As long as you can outspeed them in getting up Trainer lock and an attacker, you should be good. But if you are looking at a Gothitelle with five psychic energy on it, you did something wrong or got an extremely bad hand. If they do manage to get out a Gothitelle with 5 P Energy on it, start getting another Vanilluxe set up as fast as humanly possible or you are going to loose.

Gives you better starts. This one is optional, as Cleffa gives you six new cards for free, where as Manaphy gives you five for C. But Manaphy has 30 more HP, and that makes all the difference in this format. But I would only run this with the next possibility.

Sometimes you don’t draw the energy you need. 2-3 more Energy can help this. Maybe 1 more Water and one more Rescue or two more Water.

This card works well with trainer lock. Most decks in this format run 20-25 Trainers. This clogs up your opponent’s hand, causing them to have 10-12 cards in their hand. This works well late game, but not early game from my experience.

This could help you to get another Vanilluxe set up under Trainer lock.

This deck has a lot of good matchups, and is almost impossible to stop once it gets set up. It is fun to play, and it does well. I hope this deck sees play, and I hope you enjoyed this article! Have a great new year! Peace! 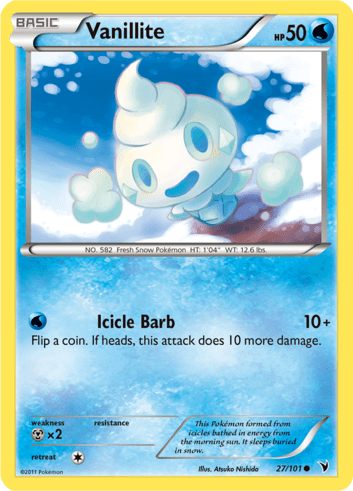