Hello SixPrizes nation! Next Destinies has arrived! There were many cards to expect, and there would be many different meta to look forward to. Today’s Card of the Day will be none other than my favorite Pokémon: Reshiram-EX.

Reshiram is Still the Greatest

pokegym.netReshiram BLW is an awesome card, but I think Reshiram-EX shows a lot of potential in this format. I feel that the ReshiBoar and Typhlosion decks may return to their position at Tier 1 or at least 1.5. It’s because there are new and old decks out there that cannot beat the speed of the decks.

But what can Reshiram-EX do? Cards like Emboar BLW 20 and Typhlosion Prime make any Fire deck faster and more efficient because of their Ability and Power. My very first deck was a ReshiPhlosion deck, and I also have a lot of decks that I play with (CoKE, MagneEel, Chandelure Lock, Mewtwo EX).

With a updated versions of Fire decks in this format, the new Reshiram-EX card might come back up, and would make its way to the top! In addition, it would not hurt to experiment this new card.

Let’s analyze the card, shall we?

Reshiram-EX is obviously a Fire-type Pokémon with a whopping 180 HP. Who would want to mess with that? Nobody, I would assume. One of its attacks cost one R Energy, and two Colorless. It hits for 50, and 30 more if you flip heads. The other attack costs two R Energies and two Colorless with an outcome of 150 damage. However, if you flip tails, it does 50 damage to itself. It can 1HKO a few big Pokémon in this format (Magnezone Prime, Machamp Prime, Zekrom BLW, Kyurem NVI, Hydreigon NVI, etc. – only name a few).

Reshiram-EX would act as either a main attacker, or a back up attacker, depending on the situation, or depending on the deck its facing. Other than being weak to Water-type Pokémon, the downside of this card is that once it is knocked-out, the opponent gets 2 Prize cards, instead of one. The card itself is still strong, but only if it is utilized properly in the game.

How Many Should I Run?

pokemon-paradijs.comI have debated with people in regard to this issue: “How many Reshiram-EX should I run?” That’s a good question. The answer would be a split decision between 1 or 2. Why? One should be alright for many different reasons. Knocking Out an EX will cost 2 Prize cards, which will give your opponent a chance to get a great head start on prizes.

One should also suffice because it can be “Super Rod-ed” back, and be “Communicated” or “Collector-ed”. This would allow players to utilize Reshiram-EX several times during the game. Another reason to run one EX would be due to budget, since EX cards can be a bit pricey.

Two should also suffice as well. Running two would be perfect since there might be a chance that one would prized. Although Reshiram BLW is still great, it cannot KO any big HP Pokémon. Obviously, I would leave this decision to all of you. The way you built your decks would decide how many Reshiram-EX you would run.

Reshiram-EX does not fly solo. He has back up to survive tough matches. The purpose of Reshiram decks is to get as many energies attached to Reshiram-EX so it could attack big against massive HP Pokémon in this format. Let’s take a look at some of these cards, without steering away from Reshiram-EX.

Emboar BLW 20 (Ability Emboar) still has a chance to make Reshiram-EX a great deck to run. At 150 HP, it is hard to KO. Its heavy Retreat Cost is its downside. Nevertheless, Emboar’s Ability “Inferno Fandango” allows players to attach as many R Energy as possible to any Pokémon. Attach them to Reshiram-EX, with a combination or Double Colorless Energy or none, so it can hit for 150 big ones.

Victini NVI 14 would help Reshiram-EX. It would add more damage from the first attack, and it would also prevent damaging itself. It also does a good job of moving “all Energy attached to this Pokémon to one of your Benched Pokémon” when it attacks for 30 damage.

Typhlosion Prime would not be left in the dust. Without question, this card would still be able to assist Reshiram-EX. It’s power abuses the Energy in the discard pile by attaching it to Reshiram. The only downside is putting one damage counter on it. This makes “Fliptini” a handy tool in this type of deck, just to prevent any self-damage to Reshiram-EX when attacking.

“Reshiphlosion EX” would someday be able to sweep the game, even if it sacrificed the attacker by damaging it. Without mentioning Ninetales HS/CL would be a shame. You discard one R Energy to draw three cards as well, which would speed the deck up, and be able to set up Reshiram-EX.

Without these guy, Reshiram-EX would just fall to pieces. Try testing both to see which combination you would prefer.

In my opinion, the card itself is playable. In a scale of 1 to 10, I will give it 7.5. It lost a bit of points since it damages itself when attacking. However, it gained a bit of points because of Fliptini. There are really great decks out there, and Reshiram-EX may suffer a bit because of that. However, cards like Emboar Ability or Typhlosion Prime, would help it set up quickly, and it can do a lot of damage at the end.

My rating for it was not high since it would be part of a Promo Tin Collection, which would allow more players to get their hands on it. Nevertheless, with the right strategy and great deck build, this card can can win. This card might see a bit of play in future tournaments, but it depends on its favorable matches. Junior Divisions would probably run this card because of its “fun factor”.

The new set has given everyone a chance to get the in to the hype of these cards, since these EX cards are quite new. It gives everyone a lot of excitement and it also allows players to experiment with these cards. Reshiram-EX would be one of the cards in the new set.

I hope you enjoy my Card of the Day article. Hope you enjoy playing Reshiram-EX, and remember to have fun with it! See you next time! 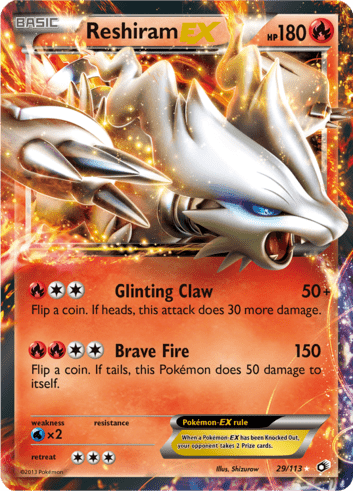