Hey SixPrizers, galladeava here with something new from my arsenal: Card of the Days. I know it’s not my usual annual tournament report, but I wanted to get CotDs up and running again so why not start with one requested by GreenPepper in the forums: Porygon-Z TM.

pokemon-paradijs.comFor those of you who have rarely seen this card being played, or its predecessors from the Great Encounters set, Porygon-Z is a Stage 2 Pokémon which evolves from Porygon and Porygon2. It has 110 HP, which even for a pre-BW card, is quite low for a Stage 2 when Viluplume UD has 120 HP and Kingdra Prime 17 has 130 HP. This puts it in 1HKO range from our beastly dragons, their EX counterparts, and many others.

As a Colorless type it has its usual Fighting weakness, which isn’t too bad seeing as Terrakion NVI, Donphan Prime, and Landorus NVI are the only Fighting types being spotted nowadays. However, with its low HP it is again 1HKO’d by all three of these Pokémon, except a non-revenging Terrakion.

The Retreat Cost is two, which I guess is average for a Stage 2, and as its attack is Colourless-Energy compatible, you may already have a Double Colorless Energy on it if you ever needed to retreat.

And briefly to cover the Basic and Stage 1-of Porygon-Z: there is one of each playable this format, both from Triumphant. Porygon TM has a mediocre 50 HP which is Zapdos NDE snipe-able and a one-Energy-for-10 attack, as well as a Recover attack. Porygon2 TM has a Power that lets you search for a Stadium when you evolve (kind of neat) and Tri-attack for a DCE.

pokemon-paradijs.comPorygon-Z has the Poké-Power “Dimension Transfer” which states that once during your turn you can flip a coin, if heads you can search your discard pile for any Trainer card and put in on top of your deck. This is very similar to two other cards playable in the format: Good Rod (tails for Trainer, heads for Pokémon) and Recycle (heads for any card).

This Power becomes interesting because it would allow you to get a Trainer card back into your deck such as Pokémon Catcher or Lost Remover, and then get it into your hand through draw Supporters such as Cheren, Bianca or Professor Juniper.

Unfortunately for Porygon-Z, we have Junk Arm; probably the most played card in the format second to Pokémon Collector, which gets Trainers back into our hand without the need for a draw Supporter.

Even if we didn’t have Junk Arm, I feel as though Recycle and Good Rod are better than Porygon-Z as they are not a Stage 2 Pokémon that takes up several spaces in your deck, and still run the 50% chance of being successful.

Overall the Power is not that great, even if it does sound like a novelty.

pokemon-paradijs.comIn terms of Porygon-Z’s attack “Suspicious Beam β,” I would have to award this the BANIF (Best Attack Name in Format). I’m sorry Primeape UL fans, this trumps Bebop Punch.

Suspicious Beam β has a base damage of 80 for three C Energy. Not that bad in this format as Tornadus has something similar.

However, the attack’s effect is not as good as Hurricane as it says that if Porygon-Z does not have a Rainbow energy attached to it, you inflict 20 damage to yourself and are confused.

This means that for the T2 80 and no recoil, you would need to hit the basic, Rare Candy, Porygon-Z itself, Rainbow energy and DCE in two turns. Seems unlikely. Tornadus EPO does the same and no one ever complains about that effect. Turn 2 80? Yeah I’ll take it.

On top of this, by attaching the Rainbow you take 10 damage so your HP is down to 100, putting you now in range of Cincinno BW and two Energies from Magnezone’s Lost Burn.

Then you have to worry about getting your Rainbows and precious DCEs sent to the Lost Zone with the ever-increasing-in-popularity Lost Remover, which could put you back to the drawing board (assuming you survive an attack). OK, I’ll leave the poor Virtual Pokémon alone now.

For me, the attack is not good; it drains your own HP and if you choose to not take the 10 from Rainbow, you take 20 instead and can’t use your Poké-Power. Ouch.

Lastly, I wanted to cover combos with other cards which would make it more playable, some sort of synergy perhaps. You would probably use Porygon-Z as a Bench-sitter to make use of the Power if you wanted to play it, so you could combo it with Noctowl HS. Noctowl has a Poké-Power which allows you to draw a card from your deck once during your turn. This means you could Dimension Transfer a Trainer to the top of your deck, then Night Sight to get it into your hand.

Other than this, I don’t see Porygon-Z seeing much play. The poor guy has a debilitating attack and a Power that is outshined by two other cards, two of which don’t even see play, so should probably left to the binder or for decks which help younger/newer players understand the nuances of Powers, Special Energy and Special Conditions.

Thanks for reading, and submit your requests in the comments below or on the forums. 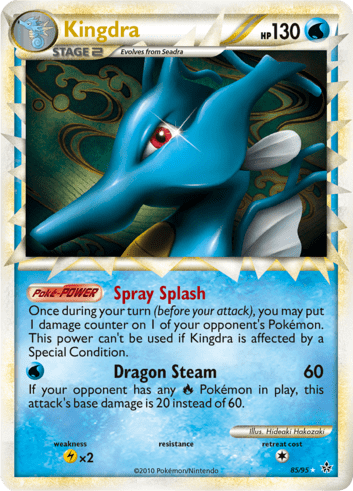