Hello SixPrizers, Stephan here again with a look at what to expect at State Championships. We can know this because the ECC (European Challenge Cup) has ended, and this usually affects the U.S. metagame drastically. I will be analyzing what decks will do well, what decks are just not good enough to cut it, and hopefully everyone will learn something from it. But, first, here are the results from the top 32.

So, let’s break down what the top 32 consisted of:

So, what can we gather from this?

And that’s about it. So, let’s have a detailed review of all of this.

Why is Zekrom/Eels doing so well?

Well, it can hit moderately fast, do consistent damage, and hit huge with Zekrom-EX. It has many tech options, including Terrakion, Thundurus and Zebstrika. Let’s look at all of these three techs:

pokemon-paradijs.comTerrakion is a good option because it swings the mirror match slightly in your favor as it can 1HKO anything in an opposing Zekrom/Eels, save for an Eviolited Zekrom-EX. It does have some major disadvantages as well. Nightmares have nightmares about starting with him. And, after you attack with him, he is stuck active not hitting for very much, unless you get Land Crush powered up. This is the ultimate risk, but it can pay off.

I don’t even know why this is listed under techs. In my opinion, every Zekrom/Eels should run two or three of these, because they make great starters. Turn 1, attach an Energy and attack with Charge. Turn 2, attach another Energy and attack for 80, putting Energy in the discard for Dynamotor at the same time. I run three in my Zekrom/Eels.

One-sided Item lock in the form of another attacker? Awesome! Until you realize that he has only 90 HP and is a Stage 1. If you can get him up turn 2, you could prevent Trainers from then on until your opponent KOs him, which could give you a massive step up. Again, this is a card that could help you or hurt you.

As you can see, it is a very versatile deck with many options that I didn’t list because I feel as though they are less viable. Just small stuff like Zapdos NDE, Luxray NDE, and Raichu Prime. Not the best stuff, just possibilities.

Magnezone/Eels is still really good. Why?

Because Magnezone can 1HKO every EX, it is a really good choice for the current meta. It gives Mewtwo-EX a really hard time, because it can just Lost Burn energy and make it so X Ball does less damage. It has built-in draw, the ability to run most of the techs that Zekrom/Eels can run, but it is a bit slower. I personally think this deck will continue to be BDIF, and it just got better because of Zekrom-EX.

pokemon-paradijs.comOf the top 32, four were CMT. It is so good because it can donk, have an okay mid to late game, run several techs, hit for high damage, and be very hard to KO. It can run things like Shaymin-EX, Shaymin UL and Terrakion. Let’s go over the basic (pun intended) strategy of the deck, and then run through the techs really fast.

Start with Celebi Prime, use Forest Breath to attach an Energy to either Mewtwo-EX or Tornadus, hopefully have a DCE and Skyarrow Bridge by using cards like PONT and Professor Juniper to go through your deck, and hit for 60 or 80 damage turn 1. It has a good mid-late game because at this point you can hit for massive damage using X Ball. It is pretty simple, can hit hard and fast, and can stop your opponent from setting up.

With Shaymin-EX’s Revenge Blast, you can hit for up to 180 if your opponent has taken 5 Prize cards. That is enough to 1HKO any non-Eviolited EX. And, you don’t even have to add Prism/Rainbow/Grass energy. It has a problem though, just like any other great card. You never want to start with him because then your opponent could take 2 Prizes really fast, even by turn 2. It could be a double-edged sword, but I really like it in this deck.

I am going to make this really concise. It can allow you to save Energy from the likes of a Mewtwo-EX with six or seven Energy attached, but just like Shaymin-EX, you never want to start with it.

Terrakion could be teched in to help with Magnezone, but then you have to run Prism Energy, and it could get really clunky, so use it at your own risk.

What? CaKE might still be viable? Are you crazy Stephan?

It is still quite good, only having a bad matchup against Durant, and you could add V-Create Victini if your meta is full of that bug.

Why was Terrakion a popular tech?

Most of this has been listed above, but ultimately because Lightning was the most-played type of the day, and Terrakion gave it a hard time. I do not see it being quite as big in the U.S., but we will see

What can we EXpect from States?

Well, obviously tons of Mewtwo-EX and Zekrom/Eels. There should be plenty of Durant around as well. Maybe Reshiboar-EX and Tyram-EX. Chandelure should see some play. Magnezone/Eels should continue to be good. Let’s look at what tiers these decks are on. Forgive me if I miss 1-2 of them, but here they are.

roleplay4life.deviantart.comI would test against every decklisted above, because you never know what to expect. I think the metagame is really diverse, and this should be a great State Championships. I would at least test against everything tier 1.5 and up. Well, I hope you have enjoyed this article, and I hope it helps you at States. Until next time, keep testing! 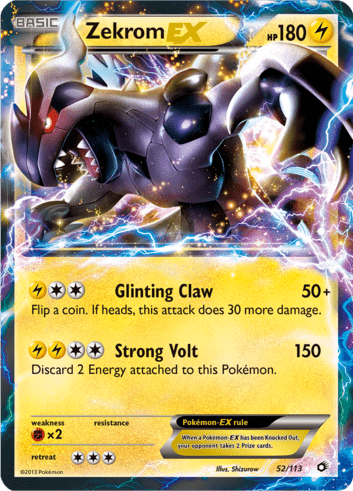