balloonsovervirginia.comHey SixPrizers! Stephan here again with a States report. I was at the Virginia States, week one. I went to sleep the night before States at 3 AM and woke up around 6 AM, so I was tired. But whatever. My brain was still sharp as ever, and so were my looks. I had a quick shower and then met with another member of my team and we had breakfast and did a small amount of testing, and we were off to States.

The car ride was awesome. It was a scenic drive, and I had a good time, even though I don’t normally do great on long car rides. My teammate and I talked about how to approach different matchups, because he was new to the game. Well, that is about all I did that morning. It was an overall good time, and it was funny, too because 2 guys with a terrible singing voice + Bruno Mars’ “Grenade” stuck in their head = an irritated driver.

There was also talk of Lamborghinis and Ferraris because we have been trying to see who can beat “Asphalt 6: Adrenaline” first. I won, and it is an amazing game, and probably has the best graphics of a iPad/Pod/Phone game I have ever seen. Needless to say, I never got that much needed sleep on the way to the tournament, but I wasn’t terribly tired.

Well enough of that… here is exactly what happened when I got there. I arrived, started trading and buying, and I ended up getting a Suicune gold star, some random Charizards that I needed for my Charizard collection, and a sealed Base Set 1st edition German booster, so that was pretty cool. I also got some other random Charizards which I collect, and then I got registered. It was the smoothest registration ever.

I would like to give a shoutouts to some people. Joey, my team member, for coming to his first tournament! Even though he went 2-5 and lost to 2 Durant in a row with Zekrom/Eelektrik/Zebstrika NXD, congrats for your first event. Thank you Alice for letting me borrow your car because mine was in the shop. Thank you to my supportive Mom for always cheering me on during my matches, and giving me a ride there.

And thank you to all those people that I tested against on PlayTCG for helping me get ready. Also, thanks to all of those people over on Pokégym who helped me to get a fully reverse holo deck! In addition to that, thank you judges and volunteers for a smooth registration and event in general.

Well, enough of my pre-event gibberish, and on to my decklist ant the event itself.

Round 1 vs. ??? with Kyurem NVI/Feraligatr Prime

pokegym.netI got a T2 Emboar and a Mewtwo with three Energy. I Catcher KO’d his Totodiles, so he didn’t last very long. I ended up taking 4 Prizes when he had no more Pokémon, and he only took one. I hate winning with Mewtwo, but I had to. It was a fast game, but it was a fun one too. Thanks for the good match, and I hope we get to have a real game sometime.

Round 2 Vs. ??? with Zekrom/Eelektrik NVI

This was easily my second favorite match of the day. We both had awesome starts, with us both being able to attack T2. I will tell you that I took a prize with my Reshiram. That was when the Mewtwo war started, so I will save you the boredom of listening to Mewtwos 1HKOing each other, and skip right to the end.

It ends with us both having a single prize left, and I can 1HKO whatever he has, but he needs to topdeck a Catcher to win, and he topdecks a Pokégear. He uses it for a Juniper and gets Catcher for the game. It came down to luck, but I suppose luck is always going to be a factor.

Round 3 Vs. ??? with Mewtwo EX/Regigigas-EX/DarMAXitan

This was, without a doubt, my favorite game of the day. I let him take the first prize by leading with Cleffa to his Mewtwo EX with DCE, so I can use Twins for a Rare Candy and Emboar, allowing me to start attacking with ReshiramEX T2. We traded prizes for a while, and it came down to 1-2, with him having one.

I have no way to KO his Mewtwo because he had Catcher KO’d my Emboar. I topdeck a Catcher and pull up a Darmanitan with no energy, and use Eek with my active Cleffa, just needing an energy and a Junk Arm. I get the energy, but no Junk Arm. His turn, he Catchers my Reshiram-EX and passes.

I topdeck a Junk Arm for a Switch, because Reshiram had no energy on it. I Eek, and I need to stay asleep or I lose. I stay asleep. I got the Junk Arm, and next turn I retreat Cleffa, Catcher his Mewtwo-EX and KO it with my Mewtwo for game. Closest game of my life.

pokemon-paradijs.comThis guy’s list was amazing. I mean, he should win Worlds with it! All right, he asked me to say that, so I did. It was still an awesome list. He starts Virizion and I start Reshiram-EX. I attach DCE and pass. He Double Draws and ends his turn with that. I whiff the Energy I need to KO it (I had a Fliptini on my bench to re-flip for Glinting Claw) and pass.

He Leaf Wallops my Reshiram-EX and passes. I whiff on the energy yet again, and he Catcher KOs my Tepig. I draw the Energy and KO his Virizion with Glinting Claw, and he KOs my Reshiram-EX with a Mewtwo EX. I forgot how he pulled it off, but he did. I drew, attached a DCE to my Mewtwo to KO his, and he didn’t get another attack off the whole game.

Round 5 Vs. Jimmy McClure with Zekrom/Eelektrik

He got a rocket start, and I got absolutely nothing. I didn’t draw anything I needed, and I only managed to take 2 Prizes.

I don’t even know what this deck was. My only Pokémon got T2 KO’d by a Mewtwo. Oh well, there goes my shot at top cut.

But at least I got a door prize! I got a cool set of Japanese Sleeves that I traded for an Umbreon gold star, so that was cool. I also got a Zekrom tin and pulled a Mewtwo EX later that day, so I had three. It was a great day. I got to watch QuadTerrakion win! That’s right, I was at the Virginia States. But, enough rambling, let’s get on with some things I learned.

Every time I got N’d, I drew exactly what I needed. I always topdecked what I wanted. That must be why I have done well with Reshiboar in the past.

As predicted, Zekrom/Eels took up a lot of the meta. Here’s why:

All of the above statements are true of Zekrom/Eels. It is a hard-hitting deck with a lot of options. An overall great deck, but I think it has taken over because it is so cheap. If it was as expensive as CMT, I think they would see equal play. But, because Mewtwo is so EXpensive, most people can’t play CMT.

I saw a lot of CMT in top cut, and I saw some really consistent builds. While it might be EXpensive, it is still really good. I probably would have played it if I could have. It is a really fast deck, and it even has some sort of late game. I played a fun match against a Zekrom/Eels, and I donked with Mewtwo, and my deck isn’t even designed to do that! CMT can donk even better, and that is the main reason why it is good.

Even if you don’t donk, you can put a lot of early game pressure on your opponent, which is awesome. I might play this deck for Regionals, but I will see if I can get all the cards for it before I promise anything.

4. QuadTerrakion won Masters at my States.

pokemon-paradijs.comYes, that’s right, I live in Virginia. It was a really good deck, it countered Zekrom/Eels, but has a bad matchup against CMT in my opinion. The idea was to keep energy going with Exp. Share and be using Retaliate and Land Crush constantly.

Curran Hill’s list seemed very consistent, but I don’t know it. If you want to see it in action, you can go over to The Top Cut on YouTube, and they have a few videos of it battling up.

It seemed to use Lost Remover and Crushing Hammer to be always removing energy from your opponent’s field, and it also seemed to have a lot of draw support. It overall seemed solid, and I would recommend testing against it.

5. Durant seems to be still good

If a nuclear bomb went off, two things would survive: cockroaches and Durant. We just can’t seem to get rid of that ant. In Virginia, it made Top 4 in Masters, and was Knocked Out by Curran Hill’s QuadTerrakion. I really don’t want to talk much about it, because it didn’t really get any new tricks from Next Destinies, and you should know exactly what this deck does.

I don’t really feel like there is much else to talk about, nothing else seems to be doing great, but Tyram did take a States in Italy to my understanding, so let’s talk about why it could make a comeback.

Well, it really didn’t gain much, apart from Reshiram-EX. That might be enough. While it can’t get a T2 Brave Fire that often, it does make a great attacker in the turns after T3 or T4. It has an answer to Mewtwo that isn’t Mewtwo, which is also nice.

pokemon-paradijs.comThey will be 1HKOing each other after Bolt Strike/Afterburner damage, and Eelektrik does exactly what Typhlosion does, but is a Stage 1. It can’t attach to the active, but it doesn’t do 10 damage every time you use it. I honestly don’t know what their metagame was, so I can’t say why it won, because Zekrom/Eels outclasses it. Unless he hit Durant every round, I don’t know how he won. The deck has more cons than pros, in my opinion.

And that’s about it. So, let me ramble for a moment.

If you want to join my team, called Team Protector, do not hesitate to PM me about it! Just PM me with your record, what deck you are playing and your age division and you will most likely be approved.

Please, comment on what you want me to write about next. I was thinking about Magikarp HGSS donk, just as a funny article.

This is a really short article, I know. It is because I am in the middle of moving, and I don’t much time right now. I am sorry for the shortness of this article, I just wanted to let you guys know how I did. I should be going to Regionals, so expect that report, and I will be writing more CotDs as soon as I can, so expect that.

And like I said, If you want to join my team, just PM me. Well, until next time, peace! 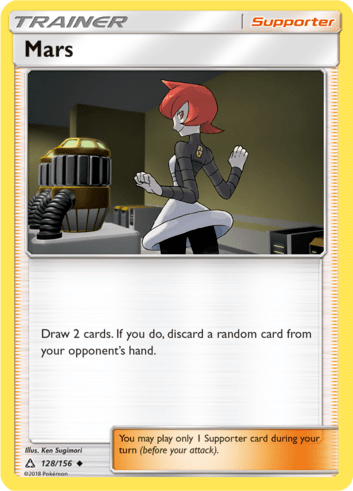