Welcome to another tournament report brought to you by the local troll enthusiast, me, Oscar Morales. Unlike last time though I’ll be providing you all with my exact list. Sure, it may be a little late, but hopefully the list will give you some insight into teching vs consistency.

In today’s article I will also be discussing my testing, ideas, and deck choices going into Regionals. This should help you see my thought processes, mistakes, and triumphs; overall allowing you, the readers, to become better players.

Mark A. HicksBeing a part of team has its quirks and well, to put it in nicer terms, can also be a headache. How often does one have what they think is an amazing idea only to have it ripped to shreds by your alleged teammates? Well, to keep this from happening I like to back up my ideas with results. Theory can only get you so far, sure in theory many things seem to work.

In theory, Magnezone decks can beat EXs, but results show that it is too slow for the current format. That is where testing comes in. Testing is your proof and either enforces or disproves your ideas. With that in mind my teammates and I (collectively known as Team D. Rush) decided to leave for Regionals early Friday giving us a full afternoon of testing.

The good thing about Regionals is that it is always the same format as States, giving us plenty of results and thus having a defined meta. Without a doubt, the two most played decks would be Mewtwo variants and Eel variants with a sprinkle of the rest; Troll, Durant, Item lock, etc.

This to me meant two things. First, I would not be playing CMT or Eels, and second, I needed a deck that has some sort of advantage going into the Eel and CMT matchup. My reasons for not wanting to play either deck were that mirror matchups usually come down to who sets up first, also I wanted a deck that could win even going second. This narrowed my choice down to Troll or CMTechs (my own name for CM variants that don’t run Tornadus EPO).

pokemon-paradijs.comAs you will see in my report Troll has such a one-sided match up vs Eel variants that the match is nearly an auto-win. However, if you glance at my previous tournament report, vs Mewtwo variants I was 50/50. I needed something to swing the matchup in my favor. After hours of testing we concluded teching in 1 Smeargle UD/CL helps the deck survive N Lock.

At first it may seem kinda iffy, but if you consider it as a tech vs the CM matchup, Smeargle’s playability increases. First it gets free retreat from Skyarrow Bridge, making it an awesome starter. Second it is a benched Pokémon that will never be targeted in the middle of a Mewtwo war. Third it is a good consistency crutch vs any other matchup that you can Dual Ball for when you are drawing dead. So Troll looked like the play.

The only other deck I was considering was CMTechs. CM is by far the fastest Mewtwo variant; that speed alone puts a ton of pressure turn 1 on any deck. Some tech choices were Shaymin EX, Bouffalant BLW 91, Shaymin UL, and Smeargle.

In testing Shaymin EX was amazing. A one card N followed by an Eviolited Shaymin EX is a lot stronger than Mewtwo EX because it is harder to revenge KO. Shaymin and Smeargle are self-explanatory. The last interesting piece of tech is Bouffalant; credits go to my team-mate Kenny Britton for thinking of this in CM.

The theory behind it was CM decks usually only give up 3 KOs and they lose, by adding a single non EX attacker it forces your opponents to take 5 KOs. This worked really well with Shaymin EX in testing setting up for a 180 Revenge Blast sweep.

Everything is pretty standard in both lists, nothing out of the ordinary. I tried being as consistent as possible while throwing in a couple of techs to throw my opponents some surprises.

mouseychu.deviantart.comAfter a day of testing I was still unsure on what to play. Both decks yielded positive results in testing. My teammates pretty much agreed with me, and with the addition of Smeargle, Troll was a solid play. In the end the majority of us played Troll; this included: Edmund Kuras (California States Winner), Kenny Britton (multiple Cities winner), Chris Nguyen (Autumn Regionals Winner), and myself. Our other teammates Ruben Cisca and Kristy Britton played CM and Vanilluxe respectively.

So I go in thinking I’m going to play predominantly versus CMT and Eel Decks, but my day doesn’t go exactly as planned… the one thing I didn’t account for was running into teammates and the increased popularity of Troll. Now let’s get to the heart of this article: the tournament report.

I would like to say his name was Alex, but I’m not too sure. I start Tornadus to his Zekrom. I manually retreat into Tyrogue and take the first prize off a Tynamo. This continues for two more turns and I’m up 3 Prizes. He is able to set up one Eel and takes 3 Prizes in a row. The reason being that every time I punched with Tyrogue I had to over extend and I had no energy on board.

The turning point comes when he can’t KO my Terrakion with 1 energy on the bench and kills something else. I retaliate his Zekrom. And he starts attacking with Mewtwo when we are at 2-2 Prizes. I count my deck and I have all 4 DCE and 1 Mewtwo left in a deck of about ten. I PONT and hit everything I need. I X Ball for my last 2 Prizes.

Round 2 vs. Stefan Tabaco w/ Troll

Ah yes, mirror. The one matchup I never bothered to test. It didn’t help that I was playing against a really good player (Top 8 at Nationals). This is the second time I played Stefan this year and just like the last it was a good match. We both started off slow and tried to set up future KOs using Tyrogue. Of course we both used SSU and were able to heal off our damage.

Somewhere down the line I couldn’t respond with a KO to keep up the prize exchange and he got ahead. The final play was him scooping up his Shaymin with a ton of energy on board and a single Mewtwo EX with an Exp. Share; giving him just the right amount of energy to KO anything in my deck for the last prize. I can’t hit the N so I concede a well-played match.

Round 3 vs Kathy w/ Reshiphlosion

I go first and begin attaching energy to Tornadus. By turn 2 I start Knocking Out Cyndaquils and she can never fully setup. I win the round relatively fast.

Round 4 vs. Kenny Britton w/ Troll

Ah yes, mirror again; just my luck. Worst of all he’s my teammate and we run identical lists, so there’s no bluffing or surprises. This game is actually pretty one-sided. I can’t hit a Supporter to save my life while he just picks off all my Pokémon.

I’m left doubting myself, and tasked with winning 4 in a row to make cut. I take a look around and the troll decks look like so:

Round 5 vs. Andrew w/ Reshiphlosion

pokemon-paradijs.comAnother Reshiphlosion. The scary part is that he actually sets up 2 Typhlosions, making this game harder than the last. I take 2 early prizes off Cyndaquils, but then fall behind thanks to Reshiram’s massive HP. I’m able to KO 2 Reshirams using Bouffalant, PlusPowers, and Rocky Helmets. He’s out of attackers so he is forced to attack with Mewtwo.

We are at 1-2 Prizes and I count my exact resources; I Super Rod a Shaymin, Mewtwo, and Tyrogue into my deck. I have 5 cards left in deck, so I waste my hand and PONT for them. I draw everything I need: Switch, Shaymin, and Mewtwo. I already had a DCE on the field and get the X Ball KO.

I face a nice gentleman from Seattle Washington; he had a son participating in Seniors. We have a friendly exchange and begin. He goes first with a benched baby Eel and active Cleffa. He Eeeeeeeks. I start by using Dual Ball and search for Tyrogue to start taking prizes.

I believe Tyrogue gets me 3 Prizes this game. He takes out the mischievous baby with Mewtwo. A couple turns later I KO his Mewtwo with my own. By then he’s out of resources, and I take my last prize off a Thundurus EPO.

Durant… one of my least favorite decks. I’m not gonna say it’s an unskilled deck; it’s just not fun to play against. We start and I turn 1 Mischievous Punch for 40. He sets up and mills me. I turn 2HKO his Durant with Punch. He mills. By now I can get KO with Tornadus and I do. He Revives and mills. This continues all the way till I take 6 Prizes. Writing about this match was even less fun…

Final round of Swiss and I’m sitting on the bubble. Will I make it or choke? I try not to think about it and hope for the best.

I hope I got his name right; not too sure on this one. He goes first and Collectors. From what I remember I couldn’t draw a Supporter to save my life. Tyrogue and Bouffalant net me 4 Prizes. I’m able to Portrait his Collector and bench a Terrakion and I start attaching.

A couple turns in I hit a Supporter. Off that I get a Catcher and an energy, so I’m able to drag up a Zek EX and kill it for my last 2 Prizes.

This was a terrible game. I start lone Mewtwo and a lot of energy. I’m thinking if I attach I’m most likely gonna get Revenge KO’d. I attach and kill an eel. Mewtwo somehow survives and takes 3 Prizes. Right before Mewtwo is going to get killed, I top deck a Bouffalant and attach a DCE. He kills Mewtwo and I once again top deck a Tyrogue and attach a F Energy to it.

We are 3-3. I revenge his Zekrom but fail to kill it. He kills my buffalo. I’m left with the lone Tyrogue and nothing but Energy Switch, PlusPower, and Junk Arm in hand. I attach another energy to Tyrogue, use PlusPower, attack for a prize, hope my Tyrogue falls asleep, and he does!!

Next turn I top deck a Dual Ball and he has a Zek EX active. I’m able to get both Shaymin and Terrakion and land crush for my last 2 Prizes.

It pretty much went like all my other Zek Eel match ups. Tyrogue wins games.

Well, I lost to the eventual winner of the event if that counts for anything. Now that I think about it, Durant wasn’t a bad play for Regionals. While Troll kept Zek Eel in check, Durant had an easy matchup vs CM variants and Troll.

On his way to winning Murat faced:

Besides top 32 he had favorable matchups across top cut. Congratulations to him.

Now for props and slops! :D

And thus ended my Regionals run and this article. I hope this helped you better understand deck choices, techs, testing, and metagame calls. I wish you all best of luck at Battle Roads. As of 4/16/12 I have booked my flight to Nationals. If you’ve never been, you should go. It’s the biggest and most fun tournament of the year, and hope to see you all there.

If you liked this article let me know in the comments section and I might try writing on a more regular basis. Critiques are always welcomed as long as they are constructive. 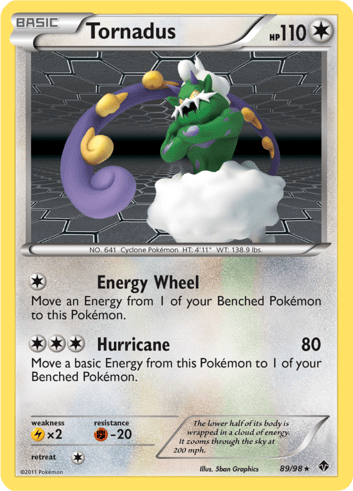