Hello SixPrizers! Stephan here with another CotD! Well, today’s CotD is special. A member on the forums said he would write it if he had someone to do a grammar check and edit it, so I volunteered. Thanks to ussgordoncaptain for writing the majority of this article!

Today I will be talking about Bouffalant BLW 91. This card has been played somewhat throughout the format and most recently helped Kyle “Pooka” Sucevich win Wisconsin Regionals. Its use stems from the fact that it is one of the better techs in the current format. To explain why, let’s look at the base stats.

pokemon-paradijs.com100 HP isn’t really anything special. It means that Zekrom BLW will get a KO with Bolt Strike, however it survives common attacks from Thundurus EPO and Tornadus EPO. However, Mewtwo-EX is pretty annoying since it only has to have 5 energy total between both Pokémon to 1HKO Bouffalant.

The first attack, Retaliate, for 2 C Energy, does a measly 20 damage. However, if any of your Pokémon were KO’d on your opponent’s turn, it does 90 damage! 90 damage is significant against many commonly played Pokémon. For instance, Zekrom dies in one hit if previously used Bolt Strike without Eviolite. And with Tool Scraper coming out in July’s set, Eviolite shouldn’t be played much after that.

You can use Pokémon Catcher in order to 1HKO an Eelektrik or Celebi Prime. Costing 2 C Energy means that you can use DCE to power it up in one turn, or energy acceleration such as Celebi Prime can be used.

The second, and rarely used attack, is called Head Charge. For four C Energy, it does 80 damage, and then you flip a coin. If it is tails, Bouffalant does 20 damage to itself. This attack is unfortunately weak because it is extremely expensive and does little damage for its price.

The Retreat Cost of 2 means that, even with Skyarrow Bridge, Bouffalant will have to retreat with an energy discard. However, Bouffalant can use the energy it used for Retaliate to retreat. Of course this is an expensive proposition because it quickly strains your supply of energy. Support from switch solves in this problem effectively.

A weakness to Fighting is bad in this format because we have Terrakion NVI running around. Whether it be Quadbulls, which is going to be bigger once DEX hits the scene, Troll, or just as a tech, there are going to be tons of Terrakion running around as long as we have Dark.Dek and Zeels.

It has no Resistance, and the Colorless typing gives it super effective coverage against, well… nothing really. Maybe RDL, but he isn’t being played much.

What decks can run this card?

pokemon-paradijs.comThis card is very splashable in any deck that runs DCE or energy acceleration. It’s splashable nature allows it to be run in a typical CMT list to great effect, because Bouffalant gives CMT something it previously lacked: a way to take the second prize without using Mewtwo EX against Zeels.

The Switches allow for both a fast retreat of Bouffalant and for Celebi shenanigans. Bouffalant disrupts Zeels by one hitting the Eelektrik, and unlike Terrakion NVI it does not require a reworking of the energy lines to be effective.

Zekrom/Eels can use Bouffalant to gain an advantage in the mirror. Unlike Terrakion NVI, Bouffalant does not require the use of F Energy and can combo well with DCE, making it a safer tech overall.

As you can see, it can be used for a wide variety of purposes, but I personally think it fits into CMT really well, just because it gives it that second prize against Zeels without using Mewtwo.

What will happen to it in HGSS/DEX?

With the use of PlusPower, it can 1HKO Zoroark DEX, which will be big. It can damage EXs to set them up for KOs, and it can 1HKO Absol Prime. It will be good against a lot of things, so it shouldn’t lose any playability.

Overall, Bouffalant makes a great addition to the two best decks in the current format. It makes a less painful tech than Terrakion NVI, because Bouffalant does not require the use of F Energy. 90 damage is a magic number in the current metagame because it allows for 1-shots against Eelektrik and a non-Eviolited Zekrom.

I have rated it 8/10 because it fits so well in many decks. It can help both CMT and Zeels in their respective mirror, but is almost useless against things like Troll and QuadTerrakion.

Below are my takes on some lists with Bouffalant in them. Be warned, they are only meant to show how decks could use Bouffalant, they are not perfect.

And now that the CotD is done, I want your opinion on something. What does everyone think of the new Shiny Pokémon Catcher? Answer in the comments, and remember to +1! 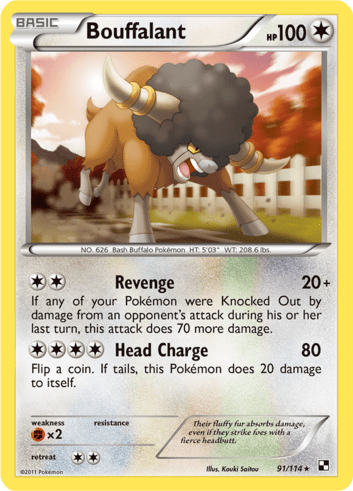