pokemon-paradijs.comToday’s COTD is Regigigas-EX. Released in the Next Destinies set, it saw moderate play in a few decks, mostly in Truth variants and CMT lists. However, with our current format now including Dark Explorers, how does he stack up? Let’s find out.

As with all COTD entries, it is vital we first talk stats. Regigigas is a Colorless-type Pokémon with 180 Hit Points. That’s the maximum amount, so we’re feeling good there. He is a Basic, so we can plop him down without any other investment, and searching him out is a breeze. Excellent. Looking good so far.

His bottom stats are decent, but leave some things to be desired. He is weak to Fighting, which is even worse now that two of the major metagame decks also share this Weakness. Terrakion NVI, Groudon EX, Donphan Prime, and all other sorts of Fighting types will be played. He has no Resistance, which is sadly the standard these days. (I really miss the Psychic Resistance Base set Normals got.) He retreats for a staggering four Energy. That’s bad. If you’re using him, expect to pack Switch, Darkrai and some dark energy, or just go down swinging with him.

Regigigas has two attacks. The first attack, Giga Power, costs three C Energy, which is attainable on the first turn with Celebi and Pachi-Shaymin engines. However, getting this attack off on the first turn is still unlikely. The attack does 60 damage, and gives you the option to do 20 more at the cost of hitting yourself for 20 as well. This is situationally useful, as this means you can 1HKO support Pokémon like Celebi Prime without any self-damage. Of course, if you play Eviolite down, you can do the 80 damage with no recoil. However, recoil might help you, because of the other attack.

Regigigas’ other attack, Raging Hammer, is the Unova Dragons’ Outrage on steroids. For the hefty price of four C Energy; it hits for 50 base damage and 10 more for each damage counter on Gigas. This means that it has a maximum output of 220 damage, enough to 1HKO any Pokémon-EX, even with Eviolite and a Defender on them. However, without a way to manipulate damage on yourself, this attack seems situational at best.

pokemon-paradijs.comAnd so, the big picture is this. Regigigas is a very situational card. It shines in several niche spots, and is subpar when not in his turf.

Gigas, even in the current format, has the following uses:

In CMT, Gigas earns a spot for two reasons. Firstly, he is great against Zekrom/Eels. His first attack is feasible on the first turn, and he isn’t weak to Lightning (Zekrom BLW/Thundurus EPO) or Psychic (opposing Mewtwo EX). This means he will take a hit and get to swing back. Your opponent, unless they’re playing multiple Prism/Fighting Energies and Terrakion, will be forced to 2HKO you at best.

Secondly, it serves as a backup Durant counter. You can use the first attack twice to damage yourself, and then use Raging Hammer the rest of the game to dole out 90 damage a turn.

In Truth variants, Gigas serves as an attacker and a finisher. You constantly hit for 60-80 damage a turn, and then once you’re ready to take the last prize, you 1HKO their Active. Once again, it also serves as a soft counter for Durant, as a simple Vileplume UD/Gigas setup, if you pull it off, will win you the game.

But what about other decks, you ask? In other decks, poor Regigigas just isn’t worth it. His 2 Prize cost means you cannot just drop him haphazardly into anything.

Countering Regigigas is another matter. The best way to go about it is to actively calculate what Raging Hammer will do, and keep the number below your important Pokémon. In other words, if you will have to 2HKO Gigas, make sure to hit him with the smaller of the two attacks first.

pokemon-paradijs.comIt is much safer to hit him for 80 (Thundurus EPO/Tornadus EPO) and then 120 (Zekrom BLW) than the opposite. Of course, if you’re playing Terrakion, you won’t be too worried about him at all. Just do 90 damage before Weakness and call it a day.

So, while Gigas only has a few uses, he is quite decent at what he does. He’s no Kyogre EX; that’s for sure. 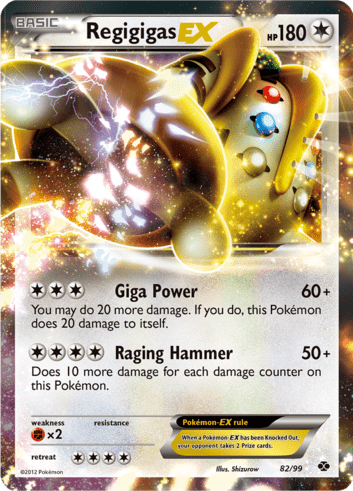