dleedailydosage.blogspot.comHello 6Prizes! Today I’m going to introduce a new rogue deck that hasn’t gotten much attention. With the release of a new set to shake up the meta and another round of Battle Roads in progress, now is the perfect chance to go rogue because the stakes aren’t as high.

At first, when I came up with the idea, I thought it was a completely original one that no one had thought of. When I went to a Battle Roads, I discovered that there were a few people with the same idea as me, so I can’t claim to be the creator of the deck.

The name of my rogue deck is “Gear Shift.” Below is my current list for Gear Shift:

My inspiration for this deck was the Darkrai/Hydreigon deck that won a major tournament in Japan. This deck had Hydreigon (from the new Dragon set, not the NVI one) move D Energy across the board allowing a player to use Max Potion on a damaged Darkrai without losing its Energy.

I was infatuated with the concept and thought of how it could be done in this format. My answer with using either Klinklang or Meganium Prime along with Prism and Rainbow Energy, which would let me use any EX and not just Darkrai.

I settled on Klinklang because its entire line is searchable by Heavy Ball and it has Psychic resistance. The next step was deciding on which Pokémon-EX I wanted to use. Darkrai is extremely useful to the deck because of his Ability, his resistance to Psychic, and his solid attack.

Groudon is used for his usefulness in the Eelektrik and Dark matchups and his ability to 2HKO pretty much anything (except an EX with Eviolite that isn’t weak to Fighting.) Mewtwo EX is here to stop the opponents that try to stack absurd amounts of Energy on their Mewtwo EX to get a 1HKO on your EX. Kyurem EX is there to hurt any deck that plays a lot of Special Energies and helps lower Mewtwo’s damage output.

The strategy of this deck is to get out a Klinklang, a Darkrai, and any other EX you may need for specific matchups and attach an energy each turn. Whenever your Pokémon take damage, you move your Energy onto something else and focus on healing with Max Potion. Pretty much every Trainer is geared toward setting up your field or keeping your Pokémon alive. I would love a Pokémon Catcher or two, but space is very limited in this deck even with most Trainers maxed out. If you want to run them, you could drop a Max Potion and/or an N for them.

There are a couple of problems that will make this deck grind its gears. The first is that you have no method of accelerating your Energy so, if the opponent Knocks Out something with two or three energy on it, you’ve just been set back that many turns in attachments.

The second problem is Mewtwo EX. Mewtwo is one of the few cards that can 1HKO anything your send up by loading up a massive amount of Energy. The first time your opponent loads up a ton of energy on their Mewtwo you can use the first to set them back, but this deck doesn’t want to enter a Mewtwo war, so only do this when they are able to 1HKO anything you have in play.

The third problem is Lost Remover, but only Durant and the occasional rogue deck run that card. The final problem is that you need to have a Stage 2 in play and, if it gets KO’d, it needs to be replaced right away. Thankfully, 140 HP isn’t exactly easy for most decks to deal in a turn, but it happens.

Decks that can get out a Tornadus EX on the first turn may threaten to run your Klink off the table before they can evolve. This isn’t a rare occurrence, as so many tier one decks run Tornadus EX + DCE + Skyarrow Bridge.

Since this deck can run almost any EX it wants, I’m going to give a run down on each EX and whether or not it is well suited to this deck.

This card is used to deal with an opponents Mewtwo EX, and if the opponent doesn’t play it then you can use X Ball for massive damage, or even Psydrive; that attack still exists.

This card undermines the purpose by only having 110 HP. It could be used as a last ditch effort with N, but I would not advise it.

Because you don’t want to leave any damage on it, this guy can’t really be used in the deck.

You get Glinting Claw and Strong Volt. Glinting Claw is underpowered, and I think Strong Volt was supposed to work in a deck that could retrieve energy from the discard, which this deck cannot afford to loose.

Again, you get Glinting Claw and an attack with an unavoidable downside.

NO! Discarding energy is bad for this deck!

LOLOLOLOL! Wait, hold it! This deck may be one of the (very) few where Kyogre EX could see play. If you include a single copy, you won’t start with it often, and you have Groudon EX to handle Lightning decks. Kyogre’s Dual Splash could be quite potent in combination with Darkrai’s Night Spear and Groudon’s Tromp to soften up the Bench for multiple Knock Outs. Time to buy full art Kyogre EX while it’s at $5.

The first attack can help reduce the damage output of Mewtwo EX, and, with two Kyurem and Darkrai, you could use Hail Blizzard every turn if you wanted.

As mentioned above, you need this card for the Ability.

Tornadus provides us with a Fighting resistance, but his strongest attack can discard Energy, which is something this deck can’t handle when unnecessary.

A Lighting resistance and a solid pair of attacks, seems legit.

I now wish there was a Fire-type equivalent to Klinklang; however he doesn’t bring much to bring to the table in this deck.

Overall, I like the deck a lot, because, once it sets up a Klinklang and has three to four Energy in play, you can deny your opponents of any further prizes with Max Potion. Klinklang can also allow for a lot of silliness, which makes him a lot of fun to use.

The best part about this deck is that, despite the silly plays and high fun factor, it is also a solid deck that I could easily see winning a Battle Roads. Best of luck to anyone who decides to shift gears after reading this article! 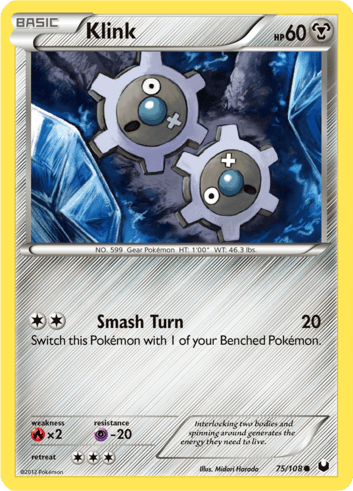