pokemon-paradijs.comSince talk of alternative formats seems to be quite popular at the moment, with discussion in the forums and John Kettler’s recent article, we figured now would be a good time for an article on an Unlimited variant that’s been growing in popularity as of late.

Recently there’s been renewed interest in alternative formats, either because people are unhappy with the current Modified (here’s looking at you, Mewtwo EX and pals) or just because they’re looking for something new to try. Other trading card games have multiple competitive and casual formats, so why can’t Pokémon?

Unlimited might sound like a good idea on paper – you get to use all your old favorite cards, revive rotated Modified decks and try out combos. It’s all fun and games until somebody gets donked on turn one. Sure, this might be oversimplifying it, but hopefully you see the point – there’s plenty of options, but not a lot of viable decks. For this reason, Unlimited doesn’t enjoy nearly as much popularity as Modified, and the lack of official support probably doesn’t help either.

This is the first in a series of articles covering the alternate Unlimited 150 format. It builds on the concept of 100 card singleton to make a balanced, varied and most importantly, fun version of Unlimited. In this article we will introduce the main rules to anybody who isn’t familiar, explain some of the rulings the team has developed and finally, give a brief run through some staple cards and deck ideas we’ve encountered so far.

* 150 is an alternative format for casual play. Almost any card, from any set, in any language is legal.

* This format uses a 100 card singleton deck. It can only contain 1 copy of any card, excluding Basic Energy cards which are unlimited. The usual restriction of a maximum of 4 for a type of Pokémon applies, e.g. your deck can contain 4 Bulbasaur but they must be from different sets (and not just reprints/alternate art etc.).

* Start by drawing 15 cards from your deck, select 8, shuffle them and place them face down as Prize cards. The remaining 7 are your hand. From here set up as normal. We recommend pre-B&W rules, e.g. no Trainer cards can be played if you go first.

* The non-Pokémon, non-Energy cards are Trainer, Supporter, Stadium. These cards are never two or more types (e.g. “Trainer – Supporter” cards count as Supporter cards, but not Trainers). The term Item is returned to simply Trainer. Cards are not given further errata depending on when they were printed e.g. Item Finder works as it is printed and cannot target a Supporter or Stadium.

* Fossils which are assigned to a specific Pokémon (such as Dome Fossil with Kabuto) count as Basic Fossils and 4 may be used in a deck. 4 Mysterious Fossils can also be used to evolve any Fossil Pokémon (including Revived Pokémon). For any other fossil cards (Holon Fossil, Buried Fossil etc.), only 1-of each can be used.

* For the purposes of evolving and levelling up only, the exact name of the Pokémon doesn’t matter. Things such as a trainer’s name or ‘Dark’ are ignored, e.g. Erika’s Oddish > Dark Gloom > Vileplume is a legal evolution line. If you level-up an ex it will still yield one extra prize.

* Pokémon SP are an exception to the evolving rule above and are treated as completely different Pokémon and can never evolve or level up into other versions of that Pokémon line. All Japanese “VS” cards count as Pokémon SP.

* You may use as many Arceus cards as you like in your deck, but only 1 copy of each.

pokemon-paradijs.comUnfortunately, Nintendo doesn’t seem to care about anything but Modified, and through a combination of enormous power-creep and ever changing terminology and rules, balance and compatibility between old and new sets is quite difficult to achieve.

As you can see, the idea of balance is taken to the extreme here through the use of a ban/ex list, meaning that specific cards or whole groups of cards are either outright banned or reclassified as Pokémon ex. This approach means that the power-creep becomes less prominent and sets as far back as the original ex series become competitive again, with even many Pokémon (not just Trainers!) from the classic Wizards of the Coast (Base set – Neo Destiny) era seeing use.

Of course a few newer cards become quite unusable with these blanket ex rulings in place, but you could consider it a worthwhile sacrifice, as a few cards becoming bad opens up thousands of other cards, old and new as playable options while keeping the rules relatively simple.

Another thing for consideration is compatibility. Many aspects of the game have been altered over the years and even things that have retained a constant presence have changed names. One of these areas is Pokémon Powers. These were later split into Poké-Powers (activated) and Poké-Bodies (static) then recombined again in Black & White as Abilities.

These rules allow all cards to interact in the way you’d expect rather than, for example, Emboar BLW 20 getting away with an Inferno Fandango with Aerodactyl MD in play. These changes, along with the definitive separation of Trainers, Supporters and Stadiums avoid the official rulings which require you to keep track of when a card was printed and what effects and cards were around at the time.

So, are you interested yet or just need some help with a deck you already have? These next two sections can (and will eventually) have whole articles but for now here’s a brief look at some staple cards and deck ideas/archetypes.

pokemon-paradijs.comPretty much any deck is possible, but there’s a few Pokémon that most decks will be better off with. These are set-up Pokémon that you often want in your starting hand or to search for as soon as possible:

* Sableye SF (You go first AND get to use a Supporter. Pokémon Fan Club combos nicely.)

* Spinda LM (Stops their setup and can be used as a wall against big Basics such as Reshiram and Zekrom.)

Most decks will want to set up a draw engine (a Pokémon that sits on your bench and draws/searches for cards). These are a few of the better options:

There’s two other Pokémon from very early in the game’s history that still hold their own today and because they’re Colourless, they can go in any deck. They both work well as counters to pretty much any scary Pokémon your opponent is throwing at you:

Just because you can only have 1 of any card, it doesn’t mean your TSS engine has to be unreliable, many of the cards in Modified are similar to many older cards, meaning you can get around the singleton rules. For example:

These decks aim to slowly take control of the game through an often quite slow and complex setup but win though punishing their opponent for making certain actions or preventing them entirely.

Power up quickly and prevent opponent setting up by constantly KOing their Pokémon and maintaining momentum. Can overpower decks that have slow starts but they need a lot of Basic Pokémon ex.

Cause discards while maintaining pressure by dealing damage. In one of Pokémon’s only cases of “Colour Pie”, these effects are seen almost exclusively on Dark Pokémon.

pokemon-paradijs.comThough most 150 decks work like a toolbox in many way, these decks make it their theme and aim to have a solution to every problem and / or hit for weakness. A LOT of searching Trainers and Poké-Powers are needed. These decks can easily change their game plan depending on how the game is proceeding.

These decks don’t just concentrate on KOing the active Pokémon, but take several prizes at once through spreading damage. Some decks can take prizes before attacking by devolving damaged Pokémon!

These are just a tiny taster of the possibilities in 150. If you have a favorite Pokémon you can probably build around it to make it work. All your rotated cards are given new life and those Rogue ideas that just can’t make it in today’s brutal Modified have a place to go. Give it a go either with real cards or using an online program.

Deck building, which might seem quite daunting from the amount of options isn’t as hard as it first looks, once you’ve got a full line of a main Pokémon, several starters and a draw engine you’re nearly there! Each week our player base is growing and more players means a better knowledge of the format overall and more refined gameplay and insightful articles will follow.

Just like the cardpool, what we can write on this new format is expansive and the 150 team will be back with more articles on topics like set reviews from a 150 perspective, countering specific threats and type-by-type analysis of main attackers, starters and Bench-sitters.

Gardylade (Gardevoir and Gallade) is already looking to be a popular deck and as other popular strategies arise we can analyse them, improve them and counter them. If you have a deck idea, post it up in the forums or comments section and we’ll see what advice we can give you.

Thank you for reading, we hope you have as much fun playing with this format as we have had developing it! 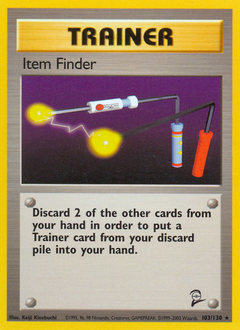