Please don’t let this oxymoron of a title confuse you: if you scoop multiple rounds in a row, you will have nothing but pathetic loss after loss, and will by no means win a tournament, let alone get any Championship Points.

Here’s a quick introduction before I serve you scoop after scoop of information on my favorite deck at the moment. I am currently in the Seniors division, and just started playing the Pokémon TCG competitively since the release of the Black & White Expansion. While I unfortunately don’t have any impressive accomplishments to share, I am doing my fair share of research to learn about the current metagame and improve my own skills.

While this deck wouldn’t be classified as Tier 1 at the moment, I want to share my thoughts on a deck that not only makes me scream for two scoops of ice cream, but one I feel is a good contender for Nationals: VVV (Vanilluxe NVI/Victini NVI 14/Vileplume UD). For this article, I will be writing about the regular version of the deck, without cards such as Mew Prime and Unfezant BLW.

Let’s first take a look at the star of the deck, Vanilluxe NVI, who makes this deck so delectably sweet.

Vanilluxe is a Stage 2 Water Pokémon with a not very impressive 130 HP, x2 Weakness to Metal, which isn’t too bad, and a mediocre two Retreat Cost. Being a Stage 2, this card would appear to have a very small chance of doing well against some of the fastest decks in the format such as Zekrom/Eels, CMT, and Darkrai variants.

pokemon-paradijs.comHowever, this card does have one attack that gives it a chance to stay nice and cool against the rest of the format, Double Freeze. For a Water and a C Energy, you flip two coins, and you do 40 damage times the number of heads, with the nice added effect that if you flip at least one heads, the Defending Pokémon is paralyzed. While this attack doesn’t seem extremely powerful at first glance, another important part to this deck, Victini NVI 14, helps to make sure the Defending Pokémon will be frozen in its tracks.

Often nicknamed Fliptini, this card is famous for its Ability Victory Star, which allows you to redo any flip used for an attack once per turn. Being able to redo coin flips for Double Freeze gives you more than a 93% chance of hitting one heads, which does 40 damage and Paralyzes the Defending Pokémon.

Now that you have the general strategy behind the deck, here is a decklist I whipped up (I just keep dishing puns out).

Here is a brief scoop on each of the cards in my decklist. Man I am on ice tonight! (I can’t say fire because that would break the great string of ice cream jokes.)

Vanillite NXD has the biggest scoops (highest HP) of all of the different mini ice creams available, and it’s attacks are rely less on flips, making it more consistent with its attacks (not that you would attack with Vanillite, but this would be the best for attacking, if you have to resort to this, and if you are, you’re melting way too quickly).

Vanillish NVI is the best choice simply because it can Paralyze with Ice Beam, which has perfect synergy with the rest of the deck. Vanilluxe NXD, which is probably freezing somewhere in your binder, sad and has never been played, is actually a very nice inclusion in this deck.

Its Ability, Slippery Soles, allows you to switch your Active Pokémon with one of your Benched Pokémon, and your opponent does the same. This can be helpful in the mirror match when Vanilluxe is paralyzed, it can be retreated to your bench, switched out with another Vanilluxe, and the slow but deadly freezing of Vanilluxe continues.

When you are trying to set up this deck, it is wise to get out two Oddish UD, because with a fragile 40 HP, they can easily be Catcher KO’d, and if you only had one Oddish, you would have no chance of getting a turn two Vileplume. Now, there are many times when you do get out the two Oddish, and your opponent won’t KO either of them.

pokemon-paradijs.comThis leaves you with two options. You can either use Seeker to take the extra one off the bench, or evolve it into Bellossom UD without the use of Rare Candy because you should already have Vileplume out. Bellossom can use its Poké-Power, Hustle Step, and can heal ten damage from all of your Pokémon.

Bellossom can soften the damage taken to Vanilluxe, as well as damage done to your Benched Pokémon, most likely any leftover Oddish and Victini. Hustle Step can turn damage from a Darkrai EX’s Night Spear from a 2HKO to a 3HKO for a Victini.

Smeargle is an ideal starter for this deck, and will let you use multiple Supporters per turn thanks to its cool (still going with the jokes) Poké-Power Portrait. Although this isn’t typical of VVV decks, I added in a Skyarrow Bridge to help retreat Smeargle to the bench when you are ready to attack with Vanilluxe.

Rare Candy helps to get turn two Vileplume as quickly as possible (and sometimes Vanilluxe, if you can’t get Vileplume until later). Communication is used to search out any Pokémon, and Collector to get all of the necessary scoops to setup. PONT and N gives you shuffle support, and because this deck often falls behind in prizes, N creates good disruption.

pokemon-paradijs.comSince this deck uses Stage 2s, it’s slow, and will probably fall behind in prizes early on, as I just mentioned. This lets you use Twins to search for those Vileplume, Vanilluxe, Rare Candy, and any other cards you need to setup. Because this is a Trainer Lock deck, you can’t use Trainers once Vileplume is out, so FSL is one of your best forms of recovery.

This isn’t a deck that needs 13 or 14 energy, as it isn’t energy acceleration, but it definitely needs Rescue Energy to help pick up the scoops you dropped. Once your opponent finally KOs Vanilluxe, you want to be able to get it back as quickly as possible, and Rescue Energy helps recover melted scoops of your Vanilluxe line.

Here are some other possible techs that I have not included in my decklist:

Virizion NVI: Virizion has a decent 110 HP, which means that it won’t get KO’d very quickly at the beginning of the game. Its HP and its attack, Double Draw, can help you setup.

Pichu HS: With its attack Playground, you can quickly load up your deck with Basics, or even when your bench is full, use it to search your deck and see what is prized. Pichu will take up more bench space, and will be a good sniping target for Darkrai EX, however.

Tropical Beach: This will allow you to fill your hand up to seven cards whenever you need to. This can also act as a counter stadium to decks that use Skyarrow Bridge (Zekrom/Eels, CMT, etc.) or even Fighting Decks that run Ruins of Alph.

I won’t go into too many specifics, but here is a general idea of the matchups of Vanilluxe/Victini/Vileplume.

This deck will struggle against decks that have Pokémon capable of 1HKOing Vanilluxe. Some examples are Darkrai EX/Zoroark DEX, Zekrom/Eels, and decks that can sweep with Mewtwo EX.

VVV has favorable matchups against decks that aren’t able to 1HKO, such as Darkrai EX variants, Quad Entei-EX, Quad Terrakion. Wait, Vanilluxe has the power to make Darkrai EX chill out (you thought I couldn’t make any more horrible jokes)? Darkrai EX can only do about 90-110 damage (depending on how many Dark Claws and Special D Energies attached) to Vanilluxe each turn, which means it won’t get 1HKOd, and it can continue to give Darkrai a brain freeze (still going).

This is why I prefer using the version of VVV without Mew Prime, because when you use Mew Prime, you will only do an average 20 damage with Double Freeze against a non-Eviolited Darkrai, and no damage to one that does have an Eviolite.

So now that you generally understand the matchups, what are the best ways to counter this deck? If your deck uses Mewtwo EX, then you want to charge it up as quickly as possible to begin 1HKOing Vanilluxe. If your deck doesn’t use Mewtwo EX, then consider teching a 1-1 line of Espeon DEX.

Espeon’s Ability, Solar Revelation, prevents all effects of attacks done to your Pokémon that have Energy attached. This will prevent Vanilluxe from ever being able to Paralyze, and the ice cream cone will be melted for good.

Thanks for reading. Please leave any comments or suggestions you have for my first article. I will try to reply as soon as possible, so I can improve my writing skills and puns for future articles. 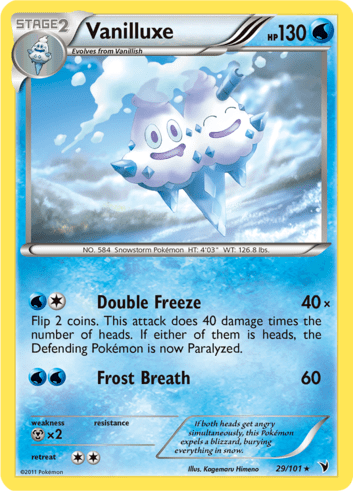