Hello SixPrizes! It’s been a long time since the site has had a card of the day so I’m going to give you one. Today I’ll be looking at the most Versatile card in the format, Mew-EX.

First, a look at Mew-EX’s stats. Mew-EX has 120 HP, for an EX this is criminally low and makes dropping a Mew-EX a major liability. Mew has a Mewtwo EX Weakness… I mean Psychic Weakness, allowing Mewtwo EX to 1HKO it with X Ball if there are three energy between the two. Mew has no Resistance and a Retreat Cost of one, meaning if your deck doesn’t have a free retreat system such as Skyarrow Bridge, Darkrai EX, or a heavy count of Switch you will only need a single energy to retreat which shouldn’t be a major problem for most decks.

Mew-EX’s only attack is Replace. For one P Energy Mew allows you to rearrange your energy in play like Shaymin UL did last season. This attack isn’t horrible, but it involves leaving a Mew-EX in the active slot for the opponent to kill and it didn’t even deal damage for it. If you use it once within 100 games I would still be surprised.

Finally, Mew-EX has an Ability called Versatile. This ability allows Mew-EX to use all the attacks of all Pokémon in play, including the opponent’s so long as Mew has the correct energy. This is the major selling point of Mew, and adds a ton of surprise options to use.

When you consider using Mew-EX you need to ask yourself the following question: Does Mew-EX use your Pokémon’s attack in a more effective way than the Pokémon itself can? An obvious reason to use Mew is that Mew is a Basic and can use an evolved Pokémon’s attacks, and even if Mew is Knocked Out that evolved Pokémon is still in play to use.

Another reason is that you want a Psychic type to use a non-Psychic Pokémon’s attacks in order to counter Mewtwo EX or possibly get around a Resistance. Finally, you may just want to have your opponent’s attacks at your disposal, which is doable thanks to Blend Energy and Prism Energy.

I’m willing to stick my neck out and say Accelgor is the best possible partner for Mew-EX in the format as well as the foreseeable future. Mew-EX works well with evolutions because you can use their attacks each turn without the strain for recovering stage 2s each turn. The problem with this is that you give an easy 2 Prize outlet to the opponent.

However, Accelgor is unique in that it takes the most benefit from Mew-EX while also eliminating the downside of Mew. To stream Accelgor you will need to set up a stage 1 each turn, but Mew makes things much simpler by only requiring you to draw a basic and DCE each turn. Deck & Cover also puts Mew-EX back into the deck so you never worry about leaving Mew in the danger zone.

*Observation #1 Mew can use Emolga’s Call for family and follow it up with a T2 Deck & Cover, this means you can have a couple extra starters able to use Call for Family.

Mew can serve as a Mewtwo EX check in Empoleon decks by copying Attack Command, just remember to count your bench properly. :P

*Observation #2 These last two Pokémon could be featured in the same deck, and might make for a good Battle Roads deck…

Decks built around these Pokémon usually have several Prism and Blend Energies so you are given a wide range of attacks not only from your own array of Pokémon but your opponents as well. In either of these deck you never know what you can do with Mew-EX until you actually try him out.

If your opponent is charging a Mewtwo EX Mew can swoop in with a DCE and 1HKO it then and there. This doesn’t make for a good Mewtwo counter but serves as a decent Mewtwo check.

In a Ninetales/Amoongus deck Mew is notable for his ability to 1HKO Mewtwo EX.

Okay this one is a bit of a joke, but you can search your deck for a card that evolves from a Mew-EX.

With the exception of Accelgor, the only defined use of Mew-EX is to 1HKO Mewtwo EX. That’s because if you aren’t using Mew-EX with Accelgor you probably don’t need Mew-EX. Accelgor just compliments Mew-EX so well and eliminates his flaws that hinder Mew in other situations. Overall Mew-EX is a card we will come back to whenever a new set is released to consider using with a new Pokémon. After all, Mew-EX is just so Versatile! 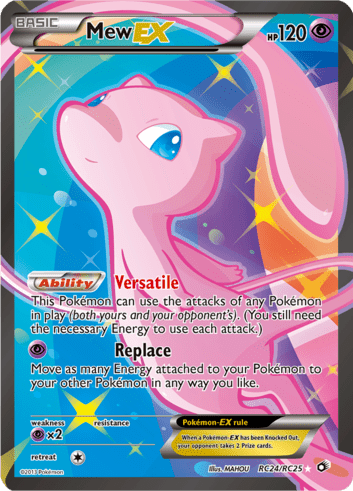