Hello all! I’d been testing Garbodor variants since Kennan’s article about it as it had somehow slipped my notice entirely. However, as soon as I started playing it, I knew I was probably going to play it this season, but it took me a while to figure out the best way to use it. I tried straight Terrakion, and it’s not bad, but I didn’t think it was the best way to play the deck. It just didn’t have enough options.

I read rokman’s article on HeyTrainer and that really turned me on to Registeel. I tried those two for a while and still wasn’t getting the best results. I know his build ran Groudon EX but I didn’t know how much I liked it, and I also don’t have access to any. I wanted a beefy attacker, similar to Groudon, but I thought that Terrakion did most of what Groudon did.

Terrakion-EX was an option, but I didn’t have any of those, and I still don’t really like it. It can attack for two Energy which is a plus, and do more than regular Terrakion for that count, but it doesn’t bring much new to the table. I was already running DCE for Registeel, so I popped in a few Mewtwo and the deck started running great.

The deck runs fairly standard, you attack with really whatever you start with and set up a Garbodor with a Tool ASAP. Yes, it’s sort of an autopilot deck, but I enjoy it because of all of the options you have. I would love the deck even more if Shaymin UL was still in the format, allowing for neat trick plays with Switch or to make your opponent’s Catcher stall work against them.

So, I went to Tecumseh on September 9th. A handful of us from the Michigan State Pokémon Club went. I played a practice game against my friend Chris playing Garchomp and got absolutely demolished. The matchup is probably around 40-60 in favor of Garchomp. If the Garbodor player gets an active Garbodor before the Garchomp player gets their Dragon Calls off, or they don’t play Ultra Ball and they’re stuck with a field of Gabites, it can be an easy game. If the Garchomp player gets fully set up first, you’re fighting a very uphill battle. Luckily, I didn’t run into any Garchomp in the tournament.

Round 1 – Evan Baker with Eels

BulbapediaI started Mewtwo to his Tynamo and went first. He said “good game” as soon as I won the flip. I peeked at my hand, seeing three Fighting and a Juniper. I was feeling risky and played the Juniper. This could have been a huge mistake as I would be limited to my six basic Energy and Exp. Shares for the rest of the game. However, the seventh card was a DCE and I took the donk.

I don’t remember my opponent’s name, but he was one of the nicest I’ve ever played against. I opened Mewtwo and went second I believe. I started attacking on my first turn, but was N’d into a terrible hand the next turn. I had three Garbodor, two Heavy Ball, and no Energy or Supporters for two or three turns. He picked around the Mewtwo pretty much, and also Knocked Out one of my Mewtwo. I finally drew an N and the real game started.

Eventually, I got a Garbodor up, but I hadn’t used any Catcher all game. I drew three off of a Cheren and started Catcher stalling his Hydreigon while attacking them with Mewtwo. He had no access to his Energy movement or free retreat, and all of his Catcher were discarded. He attacked my Mewtwo at one point for 140, but that was it. He missed an Energy drop or two, making it so his Darkrai couldn’t attack when he needed it to, and I walked away with a really weird win.

That matchup is primarily a very easy one for me. Starting Mewtwo/Registeel is ideal, while you build up a Terrakion on the bench. Registeel helps to soften their Darkrai in case they play the Eviolite to stop you from getting the Terrakion 1HKO, and Mewtwo runs through Sableye. Shutting down their Abilities really hurts the deck.

I opened Trubbish with the worst hand possible, 3 Fighting, a DCE, a Heavy Ball and a Juniper. My only plan was to Heavy Ball for Terrakion or Registeel, attach to Trubbish, play the Juniper, and put the DCE back on top of my deck. However, he led Sigilyph DRX, and used N. I got the Switch, Mewtwo + DCE and started attacking something with Catcher I believe.

I got two Garbodor on Turn 2, but he played three Tool Scrapper which really threw me off. I took a quick 2-3 Prize lead, but he took 4 Prizes with a single Triple Laser on a Mewtwo and both Garbodor (I only evolved the second one so it didn’t get Knocked Out as a Trubbish). I responded with Terrakion for a KO and he promoted Sigilyph. The Eviolite on the Sigilyph was huge, preventing me from 1HKOing it, and I couldn’t hit it with Mewtwo anymore.

It all ends up with him bringing up a Registeel and putting my Terrakion 30 HP from being KO’d, 1 Prize apiece. I could KO his benched Sigilyph, but I needed a Catcher. I draw nothing, and concede. Catcher was my next card, and Juniper was my last prize. Really close game, really good game.

Round 4 – Collan Baker with Garbodor/Registeel/Sableye

pokemon-paradijs.comWe both opened with Trubbish, but I went first. I had Ultra Ball, DCE, and Cheren in hand. I played the Cheren and hit Switch on the 3rd card. I fished out the Mewtwo and took another donk.

At this point, I started to realize just how strong Mewtwo is as a starter. It can Knock Out a lot of things, or just apply early pressure on your opponent, often causing them to deviate from their normal strategy.

This was a fairly standard game against this deck. What made it even worse for him was that he ran two Mewtwo, and led with one. I also opened Mewtwo, and X Balled on Turn 1. This led to 2 Prizes on my second turn, and he was in a tough spot. He got a Turn 2 or 3 Hydreigon, but I answered with a quick Garbodor.

He didn’t play any Tool Scrappers, and was forced to try Catcher-stalling with Sableye. I was able to find my Switch and take easy prizes off of Sableye. I ended up just Catchering his other Mewtwo that he played to return KO mine, and won the game.

Round 6 – Matt Kish with Eels

I mulliganed once or twice and opened Terrakion to his Mewtwo. I think he went first, but I N’d him on my first turn. Unfortunately, I had to use Juniper on my 2nd turn to discard two Pokémon Catcher, along with the third I played to bring his Zekrom-EX up and drop 60 on it. He Switched back to Mewtwo and did 100.

I dropped my Mewtwo, used my last Catcher on his Zekrom and took 2 Prizes. He Knocked Out my Terrakion and I responded with Mewtwo for another KO. He wasn’t drawing anything very good, and had to just return KO my Mewtwo in hopes that I wouldn’t have anything else. I showed him the DCE in addition to the Fighting I got on my 2nd Mewtwo from Exp. Share for game.

I ended up in 4th place out of 34 which I was certainly happy with to start the season. I also got a Ho-Oh EX in my 2 packs in addition to 10 CP!

These results are definitely a step in the right direction for the game. Not only are these four rather unique decks, but the first place deck played Super Scoop Up and the 3rd place deck utilized Recycle. The format is very unpredictable, and it allows for a lot of nice creativity you wouldn’t have seen last year.

pokemon-paradijs.comI also thought I’d just give a few quick tidbits about my thoughts on the format. First, DCE is a huge card. I opened with one in several of my games, and without it, I can’t say that I could have jumped out to any sort of lead at all. Many times in a game a swing in momentum is made by whether or not a player hits a DCE.

Without Smeargle or Shaymin, Mewtwo wars often come down to who has enough energy to get the knockout, not who has the Mewtwo to drop. Getting a Turn 2 Triple Laser is devastating, but it’s often not as good a single turn later.

Also, I feel that games are often closer, and can actually come down to 1 Prize apiece again. Last format, I feel like many of the games that were “close” were simply a Mewtwo war that had erupted with one person coming out on top due to attacking first and having the most responses or the other missing the energy drop when they needed it. The bad thing about these 1 Prize games is that N is even more impactful, as you can’t recover from it as easily if your Supporter count is low.

To sum up my thoughts about the format, I thought I’d quote Colin Moll in his last article:

“The Supporter situation we are in is probably the worst thing about the format. I really like this format aside from the lack of strong Supporters. This problem would probably be less severe if we had something like Cleffa HS, Smeargle UD or Uxie LA — but we are without those kinds of support too.”

I would really like a Pokémon like Uxie in this format. It wouldn’t have to be Active, people wouldn’t often Catcher it because there are more valuable targets, many decks have the Bench space to use it, and it would boost consistency tremendously. However, the good thing to look forward to is that the Supporters and Items in the next two Japanese sets can help every deck to boost their consistency, and also, introduce some interesting options and trick plays.

Thank you all for reading! As always, email me (nwalex@live.com) if you have any comments, questions, concerns, anything. Especially if you live at or around Michigan State University! We’d love to have you come join us for league. 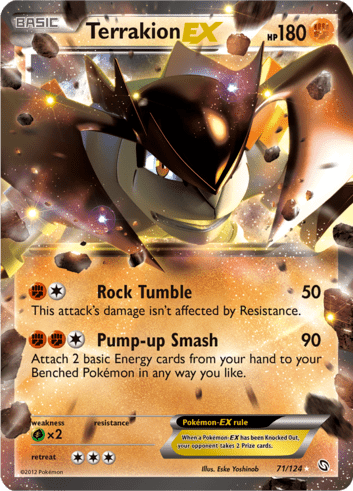