Hey SixPrizes, my name is Caleb Shuler, I am a Senior from the state of Utah, and today I will be talking about Darkrai/Hydreigon. Before we jump into it, I want to point out that this is my first season playing competitively, though I have played at league quite often before now.

I have been to one Battle Roads every single week this month, and I have played Darkrai/Hydreigon all three weeks, progressing my deck through that time.

Now the first and second weeks, I played a pretty standard Darkrai/Hydreigon deck. There have been lots of decklists/deck analyses about this deck, so I won’t go too deep into how it works. Basically the goal is to start out with Sableye, and set up 1-2 Hydreigon as well as 1-2 Darkrai using Dark Patch, Ultra Ball, and Supporters. Then tank attacks with Darkrai and, using Hydreigon’s Ability Dark Trance to move D Energy off of Darkrai, Max Potion to heal all the damage, and move the Energy back up. Here is the list I used at my first two Battle Roads.

After a couple weeks of testing and tweaking, I was ready to go, turned in my decklist, and waited for pairings.

BulbapediaI was pretty happy about this. I checked out what the other Seniors were playing, then went to Subway.

I start out with a Darkrai and a Deino. He has a Zorua, two Darkrai, and two Sableye. He goes first, attaches a DCE to Zorua, and passes. I draw, and have all the things in my hand for a T2 Night Spear. I attach to Darkrai, Ultra Ball for a second Deino, and pass. He evolves to Zoroark, benches another Darkrai, attaches to the active Sableye, retreats, Catchers Deino, and used Dark Rush for the Knock Out.

I send up Darkrai, Eviolite, Rare Candy to Hydreigon, Dark Patch, attach, Dark Trance, and then I use Juniper after emptying my hand. I draw into multiple Catchers and Max Potions. I then use Night Spear doing 30 to a benched Zorua.

Next turn he attaches to a Darkrai, and uses Zoroark’s second attack for 160 to my active Darkrai. Next turn I Max Potion, Catcher his Benched Darkrai and hit it for 90, Knocking Out the Benched Zoroark. From there he whiffs on the Energy five turns in a row, and I manage to take all 5 Prizes.

I get an amazing start, he doesn’t, and has to start attaching to the Benched Mewtwo while I take out Bouffalants and Darkrais. I manage to take five of my prizes and he sends out Mewtwo. He has three DCE and three D Energy attached and starts taking out my Darkrais. He manages to take 5 Prizes, and on my turn I use Juniper hoping to get one of my two remaining Catchers out of my ten-card deck. Unfortunately, I miss it and he takes the last prize for the game.

pokemon-paradijs.comI had never played against this deck before and was interested to see how it played out. I get a bad start, and he takes a prize or two, but I manage to come back and get set up. He keeps using Reuniclus/Max Potions to undo any damage I do, but I get a Catcher and interrupt his cycle. We both get down to 1 Prize, and I need a Dark Patch to win. I top deck a Juniper, use it, and get the Patch allowing me to win.

This was a great start to my season, and I was really happy with my build. Throughout the week I tried changing different things, but couldn’t find anything I didn’t like, so I brought the same deck back the next week.

He can’t get out Hydreigon, I get a T2 Night Spear, and I manage to take all 6 Prizes in five turns.

He gets a slow start, and both his Terrakions are prized. It is still pretty close, but I manage to pull out a win after the game goes to time.

pokemon-paradijs.comWe both start out very well getting T2-3 Hydreigon’s/Night Spears. We trade prizes using Giratinas and Hydreigons for a while. I start Night Spearing and take out a Benched Hydreigon. Eventually I have taken 5 Prizes to his three. At this point I make a misplay and Bench a Deino allowing him to take a prize using Night Spear. He gets 70 damage on my Eviolited Darkrai, and I get 90 on his Darkrai.

On his turn I think I have it won, and he thinks for about three minutes. He finally realizes he can Knock Out my Darkrai with Hydreigon and manages to take the last 2 Prizes. It was a good game with one of my best friends.

The top 4 went as follows:

At this point I am really happy with my deck’s performance, but I want to tech something in for all the Darkrai decks that seem to be running rampant here in the Utah Senior division. I think for a while and finally decide on Terrakion-EX. This accelerates my Energy, is even more tanky than Darkrai because of the fantastic grass weakness. Plus, Darkrai is weak to it, which is a huge asset. Here is my updated list with the Terrakion.

I was a bit nervous about having to drop an Eviolite and the Tool Scrapper, but I think the Terrakion will be worth it. Once again I get there a bit early and wait for pairings.

The reason I say his deck was so teched was because I saw at least Sigilyph, Mewtwo, Bouffalant, Shaymin, Giratina, and he almost Benched another card that I think was Mew. I started out with a lone Giratina, used Ultra Ball for a Deino, attached Prism, and passed. I topdecked another Prism, Rare Candied to Hydreigon, and then proceded to start using Shred for knockouts on his Deinos.

He manages to Knock Out my Giratina, making Terrakion useless due to only having one blend in the deck. I send up Hydreigon and take two more prizes off his Darkrai. Next turn I topdeck a Dark Patch, use it, Catcher his Giratina, and attach to Hydreigon, taking my last 2 Prizes.

He starts out Darkrai/Deino to my Darkrai/Deino. He attaches to Darkrai and passes. I draw Terrakion, Bench it, attach to Darkrai, and pass. He candies to Hydreigon, Dark Patch, turn attach, and uses Shred with his Giratina for 90. I draw a second Prism, Max Potion, attach to Terrakion and pass.

He draws, hits me with Shred again, and ends his turn I managed to get out my Hydreigon by turn 4, which is a bit late, but he wasn’t set up enough for it to be too much of a setback. I draw another Prism, promote Terrakion and Catcher one of his three Benched Darkrai’s, using Pump-up Smash for the KO.

He re-promotes Giratina, and hits me for 90 with shred. I Max Potion, Catcher another Darkrai, and take another 2 Prizes with Terrakion. He then Shreds again, but once again I topdeck a Max Potion and heal all my damage off. I then use my third Catcher on a Benched Sableye and use Pump-up Smash for a fifth prize. He once again promotes Giratina, knowing all my Max Potions are gone, and that three of my four Catchers were gone.

He then uses what I think will be a game-changing card, N. I have one card and it is a Sableye. He benches Darkrai, and shreds me for 90. I topdeck a Juniper, and manage to pull my last Catcher giving me the game. It was very well played on his part, I just got really lucky on the draws.

This was a really anticlimactic finals. He can’t get anything and I T2 donk his Zorua with Night Spear. He was kinda frustrated about the draws, but he was pretty nice about it.

The top 4 went as follows:

I was really happy with the day and I loved the Terrakion tech.

Over the next week, I figured out at league that people were branching out from Darkrai/Hydreigon, and that I was going to have to change my deck a bit more. I noticed at least one Eels deck at league so I decided to go with Registeel. I also dropped the Bianca in favor of a Random Receiver.

I find out on Facebook that the event is going to be capped at 40 people by the store, so I make sure to show up 20 minutes before registration begins.

pokemon-paradijs.comHe starts out with an Emolga and a Swablu to my Darkrai and two Deinos. I go first and Catcher his Swablu, attach to my Darkrai then pass. He attaches to the benched Emolga and passes to me. I Rare Candy to Hydreigon, Ultra Ball for a Darkrai, Bench it, Dark Patch, attach for turn, and Juniper my empty hand. I pull a catcher, use it on his benched Emolga, and take the KO.

He gets another dead-draw, and has to leave the damaged Swablu active. I play Cheren on my next turn, and get the Catcher, allowing me to Catcher the Benched Swablu and take down his last two Pokémon.

He has a slow start, and I get set up by turn 3. I start taking out Eels with my Darkrai and Registeel. He manages to set up a Zekrom, but I Bench Terrakion and take it out. He can’t get anything set up for most of the game, and I Knock Out his Zekrom-EX for the win.

BulbapediaI get a good set up and start denying her Gothitas. She gets a Gothitelle set up, but I take it out using Giratina EX. Near the end of the game she makes a surprise move, benching a Fliptini, and Rare Candying her Gothita into Gothitelle DRX 57, uses its first attack and manages to get the double heads, Knocking Out my Darkrai. I send up Giratina and KO it for the last prize, but it was still a very interesting play.

Overall I take third place, here are the top four:

On the bright side, despite a 3rd place finish, I was still given a 2nd place Victory Cup due to a shipping error on the side of TPCi. I was really glad about how much diversity my area was starting to branch into, and that it wasn’t just Darkrai decks everywhere.

After seeing yesterday’s record, I didn’t quite like how similar it was becoming to Klingklang EX, but I still wanted to be teched against the local meta, so I made these changes for next week’s Battle Roads.

In my opinion, we have only broken the surface on the potential of Darkrai/Hydreigon, and over the next couple months, we will see its true potential. I have really enjoyed writing for 6 Prizes, and I hope to be able to do so again in the future! 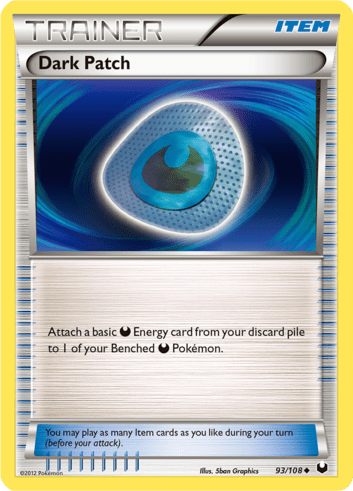