Today I’m going to talk about Ray-Boar, a deck using Emboar BLW 20 to energize Rayquazas. So far, Rayquaza DRX and Rayquaza EX have found success with Eelektrik NVI, everyone’s favorite energy recycler. But what about Emboar? Rayquaza EX can also be charged by attaching a single L Energy and then attaching as many R Energy from your hand as possible.

The last time I made a deck using Emboar to charge a Rayquaza was “Legendary Bacon” which was really clunky but was a lot of fun when it worked. This deck is similar but far less clunky due to Rayquaza EX being a Basic unlike Rayquaza & Deoxys LEGEND.

When I first tried to make this deck I went into the process assuming the deck simply couldn’t work, otherwise someone else would have found success with the deck and spread the deck around. After all, when we first saw Rayquaza EX I’m pretty sure a lot of players at least thought about the potential of using Emboar but then wrote it off for a number of reasons. There are a few reasons why the deck doesn’t work as well as theory-mon says it should…

For this deck to function you need an Emboar in play at all times. This isn’t that bad by itself, after all Darkrai/Hydreigon is arguably the BDIF and relies heavily on a Stage 2 Pokémon. The difference is that when your only Emboar goes down you likely don’t have an attacker ready to go because you’re always discarding energy unlike Darkrai where you could avoid leaving energy on Hydreigon to make it a less desirable target and preserve energy if it gets Catcher KO’d.

On the subject of Pokémon Catcher, if the opponent Catchers your Emboar and leaves it there you will need a Switch or four spare energy to retreat it because of its huge Retreat Cost. Unlike Hydreigon you don’t have Darkrai to provide free retreat and unlike other stage two Pokémon like Empoleon or Garchomp you don’t have a strong attack for a low cost.

In order to stream Rayquaza each turn you need 2-3 energy in hand to attach in addition to whatever else you need. This means that in addition to things like Catcher, Switch, and cards to set up a back-up Emboar you will also need cards like Energy Retrieval or Cilan to provide you with all the energy you need. This makes the deck clunkier and less consistent overall, something other decks with built in energy recovery/preservation don’t need to worry about.

Zekrom’s recoil is worth not losing Energy in a deck that can’t retrieve it easily, Zekrom-EX’s energy discard is better than taking damage on an EX, and Raikou’s snipe for 100 if more useful than getting an energy back.

Given the three issues listed, what does this deck offer that gives it an edge over Ray-Eels? Well, it has a few strong points that Eels would kill for, Emboar has a couple advantages over Eelektrik that are worth mentioning.

1. Only Needing 1 Emboar in Play

Emboar may be clunkier than Eels, but once you get that one Emboar in play you are set until you either whiff on energy or Emboar gets Catchered and KO’d. 1HKOing Emboar is really hard to do though, as Mewtwo needs 8 energy for X Ball (assuming you aren’t attaching energy to Emboar), Garchomp needs three Altaria with its second attack, Zekrom-EX can do the job, Empoleon can take it out with 8 Pokémon in play, and Rayquaza EX can 1HKO anything it want to.

But aside from those not much else can get the job done, and 2HKOing Emboar will likely cost you 2 of your Catchers and attacks to do so. The other thing going for Emboar is that no one is gunning for it — even after this article is posted I can guarantee no one with say “Garsh this deck is good, I better prepare a counter for it.” Heck, I’ve never taken Emboar into consideration when building my decks!

When discussing the potential of new cards with friends, the fact that something can KO Eelektrik with efficiency or donk a Tynamo has been a strong selling point. Landorus-EX from the next set is being hyped mainly because it can KO Tynamo and Dark Deino on the first turn for little effort. Emboar likely won’t face this kind of problem.

This is an inside joke between me and Crawdaunt, but I still count it as an advantage. One can’t simply forget style points — Esa ran Enhanced Hammer over Lost Remover at Nationals despite it being inferior just so his deck could have proper feng-shui and he won the tournament. That could be you next Regionals.

Now that I’ve described the pros and cons a bit I’ll show you the list I’m using:

4-1-3 Emboar is used with the same mind set as a 4-1-3 line of Hydreigon. You want as many Tepig so you get get 2 in play right from the start, 3 Emboar so you don’t need to worry about prizes while being able to get 2 up most of the time, and 1 Pignite as a backup plan because Rare Candy isn’t searchable and you can’t force yourself to draw into it.

This is your main attacker, unlike in Ray-Eels you only need one in play to attack with it each turn. Two copies are used so you can avoid prizing both and have a backup for when the first goes down.

This Rayquaza is here because its a non EX attacker. When you face another deck using dragons (i.e. most of the tier 1 decks right now) you need an non EX attacker to trade prizes with. This Rayquaza trades extremely well with every other Dragon in the format and by the time the opponent makes it past 2 of these hopefully the opponent won’t have any more dragon attackers to respond to your Rayquaza EX with.

Unfortunately this deck only runs 8 basic Pokémon so you can expect to mulligan a fair amount during a tournament.

The Supporter line is fairly standard. Cheren is used because the deck can have trouble discarding cards for Bianca. Cilan is used over Random Receiver because one you have Emboar in play there will be turns where you just need a bunch of energy to attack for 180-240 and that’s all you really want that turn.

I’d love to put in Random Receivers to reduce my chances of being without a supporter, but there isn’t enough space in the deck. At the very least if you get stuck with Cilan as your only Supporter you can thin your deck of cards to boost your chance of drawing something you want next turn.

The Items are used to help you set up, control which Pokémon is active on both sides of the field, and recover energy.

Ultra Ball is the only search card that works in the deck. There are too few Pokémon for Pokémon Communication, Heavy Ball doesn’t get Tepig and Rayquaza EX, and Level Ball only gets Tepig. Rare Candy is maxed out because you need as high of a chance of drawing into it as you can get.

Four Switch are used to deny any attempts at Catcher stalling. The deck is down to three Pokémon Catcher itself because space is needed elsewhere and you can 1HKO anything in theory.

Four Energy Retrieval and two Super Rod are your recovery cards, giving the deck and extra fourteen potential energy as well as having the option to get your attackers and Emboar line back. Running Energy Retrieval isn’t as bad as you might think, considering Darkrai decks run Dark Patch which works in a similar way in its respective deck, the difference being that Energy Retrieval needs an Emboar in play to be worth using while Dark Patch needs a Dark Pokémon on the bench to receive the energy.

The original partner to Emboar. Reshiram is able to hit for 120 damage, has 130 HP and only gives up 1 Prize when KO’d. The fact that we aren’t cramming four into our decks anymore says a lot about power creep.

Despite bashing it earlier, Entei-EX is still a solid card. It’s hard to 1HKO, hits for a solid amount of damage, and it helps set up your next attacker with Grand Flame.

Mewtwo should be considered in any deck, especially in one with a great energy accelerator. The ability to drop a Mewtwo EX and load it up is not to be underestimated and it counters opposing Mewtwo EX.

This Victini can deal 100 damage for two energy as long as your bench is full which is solid. 50 damage per energy is a better ratio than anything else in the deck, if not the whole format.

Having made the deck and playing some games with it I can say it performed better than expected (though the expectations were for it to be a total flop.) Contrary to popular belief, Emboar doesn’t automatically make a deck bad. That said, the deck is far from dethroning the current tier 1 decks. All of the issues I mentioned above still stand.

The fact that Regionals will have a top cut does this deck a big favor, you can have 1-2 bad games and make cut. Once you’re in cut you’ll have best of three games in cut which cuts a deck like this far more slack than Battle Roads would have given it. Unfortunately even a more forgiving tournament structure probably won’t be enough to allow this deck to take a top spot. This deck is only a contender when it draws all the right cards at the right time and fails when it doesn’t.

Honestly this conclusion has been really awkward to write because I feel the need to talk up the deck after writing an article about it but at the same time I recognize that it isn’t the best deck available. I do think the deck is slightly better than it’s given credit for, but I certainly don’t expect the deck to dethrone Ray-Eels anytime soon.

Unfortunately, Emboar has too many flaws to be a major success as is. Perhaps in the future when we have more strong supporters like Corless Emboar will have the boost in draw power it needs to succeed.

To anyone how tries this out or has been playing it before reading this I wish you the best of luck with it and I hope at some point in Regionals someone will turn heads when they make top cut with the deck. 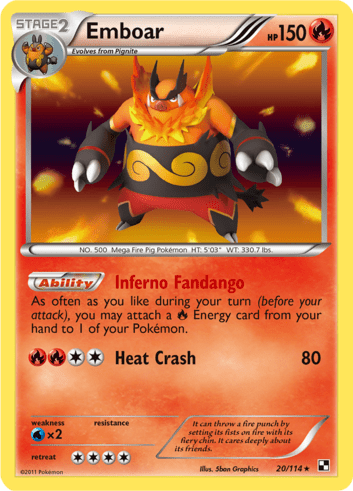