My name is John, and I’m a Masters player and League Organizer running the Edinburgh Pokémon League in Scotland. I’ve only been playing the Pokémon TCG competitively for just under a year, but in that time I’ve managed to win a Cities (my first tournament), nab 3rd at a Regionals, and made top cut at UK Nationals, finishing 10th overall. I’ve been considering writing an article like this for some time, more for my own edification than for an audience, but I figured that SixPrizes would know if there is an audience for this kind of thing.

In my brief and intense time becoming immersed in the community and culture surrounding the Pokémon TCG, I’ve noticed a trend that causes me concern. Individuals in the community seem so hell-bent on seeming authoritative, knowing everything without question, and being right, that we sometimes lose sight of our own inevitable fallibility. Behaviors like this can lead to various problems depending on your position in the community and your relation to the game, and that’s primarily what I want to explore through this article.

This way of acting holds massive pitfalls for players, though not so much as many of the other groups. When Masters players pretend to know everything and never do wrong, Juniors and Seniors ape these actions. When you’re unwilling to say “I don’t know” or “that was a mistake” you preclude learning from those mistakes and finding out the truth about the things you are unsure of.

The flip side of this is impatience with people who display a lack of knowledge (I have seen Masters act this way toward Seniors in particular too often) and a presumption of inherent superiority. These aren’t desirable qualities, in a person or player-base. Pokémon is a large franchise, with a long a complicated history and structure. To presume to know everything is foolish, although it’s not that you should not strive for comprehensive knowledge – rather acknowledge the gaps in your information and don’t assume that you’re right.

Additional problems that can come from this are an overeager willingness to argue with Judge rulings in tournaments, and unintentionally spreading misleading information.

pokemon-paradijs.comI’ll admit a shocking lack of knowledge in this arena. I play for fun, and occasionally collect the cards because I like the art or for sentimental reasons. That said, I’ve seen peripherally similar issues plaguing the collector community; incoherent gradings of card quality made for spurious reasons and due to assumed authority, claims to collection completeness or knowledge of the cards that aren’t borne out by evidence, and combative attitudes toward any perceived subversion of claims of expertise.

Unchecked this can create a difficult culture for new collectors to find footing in, and can splinter the community in ways we would probably deem undesirable. Thankfully, according to a friend of mine who is a collector, this sort of problematic behavior is rare for the most part.

Here’s a hard one to cop to for some people: we make mistakes. We’re human, and it definitely happens. I have personally heard of at least two or three ruling by Judges at tournaments that have been plainly wrong (clear from even a cursory reading of the card text) and that were upheld, in one case even deciding the outcome of the tournament. This is obviously going to be a difficult tightrope to walk for Organizers and Judges, as we are in a position of authority with regard to the game.

Rather than assuming perfect knowledge, it’s important that we approach each ruling with fresh eyes and a willingness to consult both with our resources (online compendiums and errata, for example) and colleagues (other judges, the TO or head judge) in order to provide the most accurate and fair ruling. The players that participate in this game expend a lot of effort and resources to play, especially those that play competitively, and we need to give their concerns due attention.

Our efforts as judges and TOs as well are what allow Pokémon Organized Play to function as a structure, and we deserve respect for that effort, but in turn we need to show respect by taking the game seriously and by being willing to identify mistakes and errors that we have made or could make, and work toward minimizing those.

pokemon.wikia.comI’ll take this opportunity to say that these situations are very much the exception; my experiences in the Pokémon community have been by-and-large very positive. As a group we have numerous strengths, and I can only presume that we will continue to shore up and improve upon those. However it’s important that we not only acknowledge our weaknesses, but address them. I certainly don’t believe these issues are limited to our pastime, and would go so far as to say that they most likely exist to some degree or another in most interest groups.

However, as players, judges, organizers, and members of the community we have a responsibility to the younger members of our hobby. Unlike other TCGs, Pokémon has an inherently large age spectrum among the players by design, and the older players would do well to remember that. Some of the most gracious, thoughtful, sportsmanlike, and welcoming players I have encountered at Edinburgh Pokémon League have come from among the ranks of the Junior and Senior players.

Perhaps while they learn from us, we can be watching and learning from them? 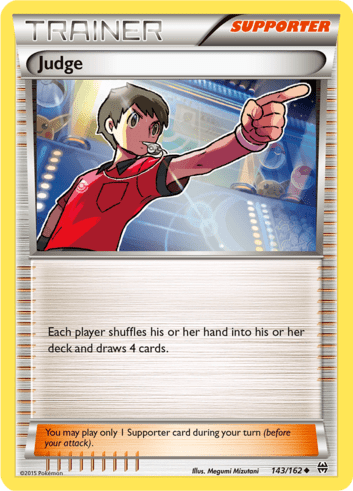