Hey guys, Sam aka Googleplex here with my first article – a commentary on Stunfisk DRX.

Stunfisk is an often overlooked card. With a hefty 3 retreat, only 100 HP, and a damage cap of 40, you might understand why, especially with Landorus-EX having a similar but more powerful first attack.

However, with an attack similar to such a hyped one, along with a type and Resistance to die for, Stunfisk is certainly not a card to overlook. In this article I’ll go over the pros and cons of using Stunfisk, and what decks the flatfish deserves a *ahem* plaice *ahem* in, as well as why you’d run it over Landorus-EX.

Its typing is really what helps Stunfisk a lot. The ability to 1-shot Tynamos, then KO 2 more the following turn is really something good, and hitting some of the most played EXs like Darkrai EX and Raikou-EX is really nice.

Muddy Water deals 20 damage for F and also deals 20 damage to one of your opponent’s benched Pokémon, which is basically Landorus-EX’s first attack but without the steroids. Although it won’t donk Deino NVI like Landorus-EX will, it still can win you the game on the first turn against both competitive Tynamos.

Even if it doesn’t donk, the damage is a great number. For instance, a Muddy Water and 2 Rumbles is enough to finish off a Darkrai, and Darkrai can only 2HKO Stunfisk, unless it is equip with a Dark Claw and Stunfisk has no Eviolite. In Fighting decks Muddy Water has the magic number to increase Giant Claw’s power to 120 on Groudon EX, and in other decks it can mean one less energy on your own Mewtwo to take the KO on your opponents Mewtwo.

Rumble is a really great disruptive attack. For FC you hit for a low damage output of 40 and prevent the active Pokémon from retreating. While not very exciting alone, in the current metagame it is something. Arguable the BDIF, Darkrai/ Hydreigon, doesn’t run any Switch. Many other Darkrai variants don’t as well, since retreating isn’t much of an issue with Dark Cloak.

Stopping a key part of the opponent’s deck from retreating and setting up the KO is really useful and quite powerful. A Darkrai stuck in the active can mean a PlusPower KO from Stunfisk the next turn, and Darkrai can’t even one shot Stunfisk. An Eelektrik active means the opponent potentially has to burn a lot of resources in the hope of drawing into a Switch, and if they don’t then not only do you 2 shot the backbone of Eelektrik based decks but you get a turns worth of stalling.

On the theme of Eelektrik, RayEels was one of the best performing decks at Regionals, but most of its main attackers are heavily Eelektrik reliant. Keeping a Rayquaza EX active that has just used Dragon Burst or a Raikou-EX having just used Volt Bolt means they can’t retreat and can only hit you for a low amount of damage. Raikou especially doesn’t enjoy this treatment due to Weakness.

Seriously, I’ve had people who have overlooked the card, see me flip it over at the start and promptly laugh. Being on the receiving end of a Stunfisk is also fairly embarrassing, since, well, it’s a Stunfisk, after all.

A retreat of 3 is certainly a con, however it also gives you the benefit of being able to be searched by Heavy Ball, a card often used in Fighting based decks. This makes Stunfisk very accessible and possible to get on turn 1, even with low counts of the flatfish.

pokemon-paradijs.comAlthough searchable by Heavy Ball, 3 retreat certainly hurts. Therefore, high counts of Switch or Darkrai EX and Prism / D Energy are needed to combat this. This does limit the decks Stunfisk slightly, and is its main drawback.

Both a pro and a con of Stunfisk, 100 HP means it can be KO’d in one shot by Zekrom, or Night Spear sniped then Catcher’d by Darkrai EX. Raikou can also KO Stunfisk while it’s on the bench. This can be sorted quite well by an Eviolite, but beware the existence of Tool Scrapper.

In the Black & White to Dragons Exalted format this isn’t a considerable problem, however with Boundaries Crossed around the corner Blastoise decks have been fairly hyped and will see a fair amount of play. This will hurt Stunfisk as it means Keldeo-EX will need only 3 Energy of any kind to KO it in one shot.

I honestly don’t think this means the end for Stunfisk, as you honestly shouldn’t play Stunfisk down in this matchup and so this will only be a problem if started with it.

Which decks should you give it a plaice in?

Fighting decks will certainly appreciate having a turn 1 attacker, but also a potential staller against faster decks. Stunfisk can give you that extra turn to set up a Terrakion-EX, and as mentioned earlier spreads the right amount of damage to power up Groudon EX.

Ho-Oh EX again appreciates a turn 1 attacker and variants that have lots of F Energy certainly can find a plaice for Stunfisk. Variants with D Energy and Darkrai can give the fish free retreat. Beware the weakness shared by Ho-Oh and Stunfisk, however due to the nature of Ho-Oh the multitude of types used should mean that you have a Pokémon that can cover Stunfisk’s weaknesses.

Both Garchomp DRX 90 and Empoleon DEX decks largely use Pokémon with low Energy requirements to attack. Stunfisk therefore fits the bill well and can even abuse Blend WLFM, a card often used in these sorts of decks to use Dragon Blade in Garchomp and tech in Terrakion in some variants of both.

But why use it over Landorus-EX?

Stunfisk only gives up 1 Prize. This makes it less of a liability not only against Blastoise, but against anything else. It can be very useful as the “7th prize.” The fact it gives up a single prize is a huge reason to use it over Landorus-EX.

This attack is seriously amazing, and will be so long as Hydreigon / Darkrai and Eelektrik based decks perform well in the format. Secondly, with Ether being cut from the set Landorus-EX’s second attack doesn’t look like it will be easy to use, so Stunfisk is less of a one-trick pony.

Speaking of Ponies, keeping a Blastoise active then N’ing the opponent to a small hand is very nice.

Everyone and their gran are going to have prepared to face Landorus-EX, but will they have prepared for this little guy, err, fish? The fact it won’t be nearly as tested against will hopefully make it less counterable, and potentially more useful.

Overall I think Stunfisk is a great little card that you should certainly test before you write it off, even considering Landorus-EX. When Stunfisk works, it really works. Thank you for reading, and if you enjoyed reading the article then I’ll be more than happy to write another, because I enjoyed writing it a lot! 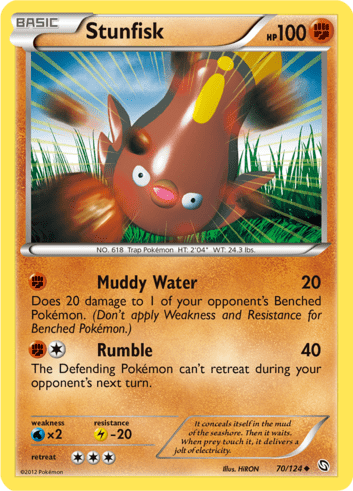