Greetings SixPrizes. Professor Redwood is a nickname I recently acquired by way of passing the Professor Exam that Pokémon offers. That, and the kids who attend league love “cool” sounding names.

I’m from the northern Illinois area, where we have many leagues and many strong players. One of the Junior players near us went 7-0 at this past Worlds. I myself have been playing competitively since February of this year, around the time Next Destinies was released.

Anyway, why are we gathered here today? I have a deck I’d like to talk to you about. I call it “Dark Hand.” I apologize for the irony that Dark is a type, and there are none to be found here, but I feel the name fits. Before going into the list itself, let’s examine each of our major players.

The big daddy of the deck, the centerpiece, the grand marshal. Dusknoir has an extraordinarily powerful Ability which works like Reuniclus BLW in reverse:

This comes with a significant amount of advantages. I’m going to try to narrow it down to the top 3.

Often when you’re playing Mewtwo EX, or a multitude of other heavy hitters, you’re swinging for massive amounts of damage. Many times, you can hit hard, but not hard enough for a 1HKO. With Dusknoir on the field, no damage will get lost. I’ll provide useful examples of this later on.

When you can move damage off of your opponent’s Pokémon, you can keep a heavy Bench-sitter (Terrakion, Eel, any Fighting EX) sitting around forever. Given, there are decks that this doesn’t work well against (Keldeo/Blastoise), but when you play the right deck, you’ll have a great advantage.

This ability allows for many options of what to Knock Out, and when to do it. If they try to stall you by Catchering up Dusknoir, you can still have the option of Knocking Out their attacker if you spread enough damage around. They just put out 2 Deinos or 2 Tynamos? Dusknoir allows you to take existing damage and send them to the discard pile before they become something much more threatening.

By and large the most hyped card of Boundaries Crossed. Like it or not, there’s good reason. Landorus is an extremely strong card in this deck. Here’s why:

There’s no way around it. Fighting is basically the best offensive type we have in the TCG. Darkrai and Eels are so popular that doubling up on damage will always be welcome.

Hammerhead is sick. 60 total damage for a single Energy, and possibly 90 if you catch Weakness is extremely strong. A 1-Energy attack is also wonderful in the face of Hammers. If they manage to discard your Energy, you’ll only need a single replacement to start smashing again.

You have no idea how much this helps you attack with him on T1. Ultra Ball is good, of course, but sometimes you’ll be forced to throw away much needed resources that can cost you later on. Ultra Ball will be needed for our next contender anyway.

The legendary dragon that started fusing with his counterparts in the most recent video game is another staple of this strategy.

This attack is so good it hurts. If your opponent fills their bench, you have 180 damage to work with on your next turn. When you can combine that onto anything sitting on their field, they’ll be in big trouble.

EXs are extremely prevalent on the current scene, their main drawback being the double prize cost. At best, you have a 90 HP to Prize ratio, which isn’t optimal. Your opponent will have to trudge through 130 HP of Kyurem before taking a single Prize, which will make their game more difficult.

This wasn’t an issue before, but Landorus’s presence on the scene makes Kyurem’s type a great asset. Glaciate creates an instant 60 damage, and any residual Hammerhead damage Kyurem takes will allow Outrage to make a massive dent.

Let’s examine the list I’ve been working with. I’ve played over 30 games with it so far, and the results have been pretty positive.

pokemon-paradijs.comThe first thing you’ll probably notice is Shaymin EX. His purpose will be discussed when I talk about specific matchups you’re likely to encounter. Three Candies are included because of Skyla’s added consistency. Usually in Stage 2-centric decks like this one you’d use 4, but Skyla helps get Dusknoir on the field immensely.

I put in a variety of Supporters because of how situational this deck tends to be. Including just Bianca over Cheren is asking to be able to Bianca for 1 or 2 when you can’t get cards out of your hand, and having just Cheren in your hand could lose out on draw power when you really need it.

Juniper is only 3 because this deck can’t always empty its hand before playing a Supporter, and throwing away resources can be costly. The amount has worked well for me, and has maintained a very workable level of consistency.

Exp. Share is included both to conserve Energy and get your next rank of Kyurems and Landorus charged up. Combining Energy Switch with this allows you to Glaciate or Land’s Judgment with no Energy previously on the attacker.

You’ll probably also notice that the chosen ACE SPEC is Gold Potion. I used this one for a few reasons. If you’re like me, you probably have multiple decks and don’t like switching cards around. Combine that without how expensive it is to get multiple Computer Searches, and you’ll save yourself a headache.

Also, it’s extremely satisfying to watch your Landorus get Night Speared by Darkrai, or X Balled by Mewtwo, only to have all the damage removed by Gold Potion. Breaking enemy 2HKOs can win you games. Always remember Skyla is your friend for this card.

The bread and butter. Like all decks, there are some players you want to watch out for in the metagame. We might as well get the worst matchup out of the way first.

These are always rough. If they don’t use Double Colorless, expect Keldeo to be hitting for a minimum of 110 per turn. Keep Landorus away from their Keldeos as much as possible. Shaymin is in the deck strictly because of how difficult this matchup is.

You can put Landorus up as a trap, and when they take two easy prizes, plunk down Shaymin and revenge them for 180. You have to be careful, of course, because you’ll need one Prism and 1 Energy Switch to pull this off.

If you aren’t playing against Blastoise/Keldeo, or a deck with 100% Terrakions, don’t put Shaymin down. Squirtle’s Ability to nullify Hammerhead snipes and Glaciate damage also hurts.

This is by far the worst matchup, but it can be winnable.

Three words. Max Potion shenanigans. The beauty of Dusknoir is his ability to decrease the effectiveness of Max Potion. When playing against this variant, make sure your damage is as evenly spread across their board as possible. It will significantly decrease their ability to save their Darkrais from being Knocked Out.

The other nice element of this matchup is hitting their Darkrais with Landorus. Use Dusknoir to put 20 on Darkrai, Land’s Judgment, and wish them a nice day. Darkrai’s complete inability to 1HKO Kyurem will also be very beneficial. Just take caution, because Darkrai can shatter your Dusknoirs because of their Dark Weakness.

pokemon-paradijs.comSome of the time, you’ll just be donking these fellows with Landorus. As long as you can keep as many Eels off the board as possible, you’ll be winning these matchups pretty handily. Kyurem is your best friend because he can’t be 1HKO’d unless they throw three Energies, and if they burst with two, you’ll be able to hit back for 140.

One of my favorite strategies against this matchup is to catch an Eel, N them to a very low hand, and continually Hammerhead while moving all the damage to Bench-sitters. You’ll be able to KO their Rayquazas without even hitting them directly.

The “Dark Hand” is a very good deck. I don’t know if it can be called Tier 1, but any of its opponents should be careful. Be smart about where you put your damage, and you’ll be very successful. If you know your opponent doesn’t play Super Scoop Up, you can intentionally save KOs for later, so N won’t be a burden on your hand. I’ve taken 5 Prizes in one turn with this deck, and so can you.

I hope you enjoyed this article. Get your Dark Hand, and you’ll have Darkrai running in fear! 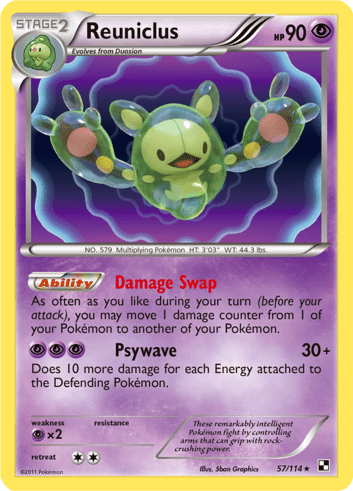