pokemon-paradijs.comHey SixPrizes! Welcome to my first article: a Philadelphia City Championship report. Since this is my first article, I should introduce myself to the community. This is my second year playing, and although I have not won a tournament yet, I did come in 6th at a Spring Battle Roads last season, and I did pretty well in this tournament, too!

I also have a YouTube channel where I upload pack openings, trades, etc., so if you want you can check that out here.

I wasn’t planning on going to this event until my grandmother got sick about a week before the tournament, so I had an excuse to get my dad to drive me down to Philadelphia from New York City (in New York City, you can’t drive until you are 18, even though I already have my license at 16!). So, off I went to Philly, with low expectations, since this was my first event of the year thanks to school obligations.

There were 48 Masters, meaning 6 rounds of Swiss and a top cut of 8. I decided to run Darkrai Hydreigon the night before, and tested it out a little before the tournament. I made some last minute changes thanks to a few friends which really helped me out. Since I know everyone wants a decklist, here is mine:

After I played 2 matches with my friends, the pairings were posted and the tournament began.

pokemon-paradijs.comThis match was against a first time Poké-mom who had built her deck with her son’s spare cards. However, for a first time player, she was not half bad.

We both started Sableyes, but I was able to get the turn 2 Night Spear while she was stuck Junk Hunting. I denied her set up by Catchering up her Deinos every turn, and by turn 5 or 6 I had KO’d all of her Deinos. From there, I just Night Speared my way to a quick 6-0 victory.

I don’t remember too much about the beginning of this match, but I do remember that I was able to Tool Scrapper all of his Tools in play, retreat my active Deino, and Night Spear for a double knockout on a Garbodor DRX and Drifblim DRX, leaving me with 1 Prize left and him with a Garbodor active.

From there, he just draw passed, and I Night Speared for the KO.

I was really happy with myself after this game, not only for being 2-0, but for listening to my friends and including a 2nd Tool Scrapper. Without it, I don’t think I would have been able to win this game.

This round, I was paired up against a good friend of mine who actually helped tweak my deck last minute. He had also come in 4th at the Fairfax City Championship the day before, so I knew I was in for a tough round.

He started off a Landorus-EX to my Sableye and Deino, and Hammerhead turn 1 without doing much else. I was able to get discard 2 Energies off an Ultra Ball, grab a Darkrai, attach an Eviolite, attach an Energy to Sableye, Juniper, and double Dark Patch on turn 1, putting him in a scary position.

However, from there nothing really went my way. He was able to deny my Hydreigon the entire game, and although I N’d him to 1 and me to 3, he drew a Juniper off of that. I was able to mount a nice comeback, but to no avail.

Of course I would be paired up against the exact same deck for two rounds in a row. However, this match, I wasn’t even able to keep this match close.

I tried to Deep Growl with Deino for a few turns so I could draw a Supporter and set up, but his Landorus was able to Hammerhead away all my Basics after a few turns.

From here, I knew I had to win out if I wanted to make top cut, so I went outside, got myself a slice of pizza, and refocused myself to the task at hand.

This man took forever to make his moves, and I think he was knew to the game, too. He did manage to KO 2-of my Deinos with Wailord DRX’s Water Cannon, but once I got a Hydreigon set up, he stood no chance. I Night Speared his Squirtles every time he dropped one, and he was never able to set up a Blastoise.

At the end, he tried to go aggro Mewtwo, but I dropped a Mewtwo EX of my own and X Ball’d for the KO. It wasn’t the most exciting match of the day, but it was certainly a lot of fun.

After the round was over, the PTO posted the standings next to the roster. I was in 13th place, and needed five 3-2’s to lose or drop to make top cut.

This was easily my best, and closest match of the day. I had a horrible start, with Shaymin EX active and no Supporters in my hand. Luckily, his start wasn’t too great either, but he was still able to get off a turn 1 Hammerhead. I was able to drop 2 Deinos and a Sableye to avoid getting donked, but he was able to race out to a 6-2 lead.

Then, I top decked an N, and dropped him to 2 cards. From there, I was able to take off, getting a Rare Candy Hydreigon and a Night Spear off on the same turn. He was unable to respond after I KO’d his Landorus with 2 energy on it, sending up a Darkrai to stall.

I then Juniper’d and got an amazing hand: 2 Catchers, a Dark Patch, Random Receiver, 1 D Energy, an Eviolite and an Ultra Ball. I was able to load my field with Energy and sent up a fresh Darkrai to attack. He was still unable to do anything but drop a D Energy onto his Darkrai and pass.

I KO’d his Darkrai, and continued to put 30 damage on Terrakion, setting myself up for a 2 knockout turn on his Roselia DRX 12 and Terrakion NVI. He then top decks a Roserade DRX 15 and Le Parfum’s for a Juniper.

All he needs to win is a Tool Scrapper and a F Energy and he moves on to top cut. However, he hits neither, and has to pass. I literally jumped out of my seat as I was so relieved, and revealed I had the Catcher for the game.

Unfortunately, my resistance was not good enough for me to make Top 8, but I did end up getting 10th, which I am very happy with, as this was my first tournament of the year.

If you enjoyed this report, please let me know! On the same note, if you have any constructive criticism, whether it be to my writing, deck, etc., PLEASE DO NOT hesitate to post a comment! I am always looking for ways to improve!

Thanks again for reading this! 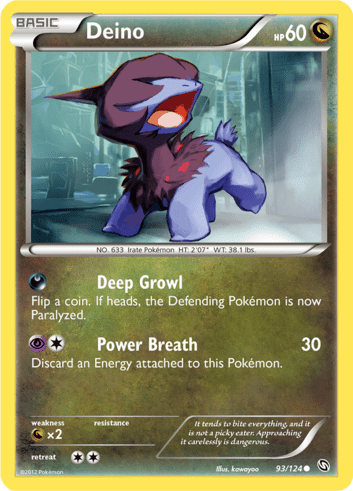