Hello everyone, TerminalHope here fresh from an exhausting weekend of Pokémon and long-distance travel shenanigans. I’m here to share my experiences of the UK’s Nottingham Regionals, and my musings on the current state of the Metagame in the UK, plus the learnin’s what I done did have at them there Regionals.

I managed to get 2 1/2 hours of sleep between fretting and playtesting the night before we set off for the tournament. My friend Dominic kindly drove us down, but in order to arrive in time for registration we had to leave Edinburgh at 4 AM. We discussed Pokémon most of the way, as you do, and managed to get a quick couple of games in the Cafe across from the venue before it opened.

Once we were in the shop and registered, I sat and played a few games against Dominic with another of my decks. I was amused and annoyed to hear the handful of Masters across the shop from me blustering disdainfully about the metagame – Keldeo/Blastoise is horrible and unplayable, Eels is dead, etc – and to my further frustration, nearby Seniors began to do the same, and shortly after I was getting lectured by a young man about how Skyla is a horrible card and nobody should ever play it.

Needless to say, I was amused at the opinions flying around, but sad to see that these behaviors (which I highlighted/complained incessantly about in a previous article) are alive and well.

However, once more players started arriving folks got down to business, and the tone became a bit more friendly, busy, and madly social. The venue is small to accommodate so many players, but in a way that engenders a friendliness amongst the competitors. I tried to help a friend locate a last-minute Computer Search (we failed) and mentally prepared myself for round 1-of 6.

I come all this way to participate in a Regionals, and my first opponent? From Scotland! I know Michael from events at Cumbernauld and Edinburgh Leagues – he’s an excellent player, and a very nice guy.

Unfortunately for me, he N’d me out of my revenge Mewtwo + DCE twice in the first few turns, and my starting Landorus tipped him off to not drop a Darkrai until it was safe. That said, the game was fairly close throughout.

In the end I made a foolish error by leaving my Mewtwo active with DCE attached, and he had an Energy Switch that allowed him to KO me.

After some confusion as to my opponent’s name, we eventually managed to get introduced and sit down to play. He starts with Swablu active, and I start with Terrakion, but he goes first and benched a Gible, so the Mewtwo donk was out.

I instead focus on getting Garbodor out, and manage it by T2, shutting down Fight Song and Dragon Call, and making his benched Altarias nothing but a liability. Despite this, the prize exchange is pretty close throughout, but I’m always a step ahead, especially after my Landorus 1HKOs a Garchomp with Land’s Judgement, and I take the last prize.

I was honestly surprised by how close this matchup ended up being, especially with Garbodor in my corner. In retrospect (hindsight is 20/20, obviously) the field would have suffered against a Garchomp/Landorus deck quite badly, but Garchomp/Altaria just has a few glaring weaknesses that made it too much of a liability.

I know Tamao from last year’s Cumbernauld Regionals, where I took 3rd Place, and he took 2nd, though we never played in that tourney. I know from reputation that he’s a talented player, so I’m aware I need to bring my A game.

We flip, and he starts Duskull to my Terrakion-EX (I believe, imperfect memory and all that.) I mostly remember desperately trying to keep my Garbodor alive and in play, as the spread around my board was enough to take out all my attached Energies and leave him with a single Prize to take – likely resulting in my loss.

He eventually KOs my Garbodor, so I take the risk and Juniper away a huge hand. With fourteen cards left in my deck and a single Catcher remaining – I draw into the game-winning Catcher.

The second I sat down I knew this opponent meant business. No interest in chit-chat, strict adherence to rules, and a serious game-face. I can’t be like that, but I can respect when someone is.

So I was annoyed that I had to keep my cards all aligned in the same direction, and such, as I’m terrible for that – but he was well within his rights to want that. Maybe I’m just disorganized?

Anyway, this game was incredibly fun nonetheless, with Garbodor being taken out early and Duncan being unable to get up another Blastoise. He has a Prize left to draw, and I have three left, when I N him to one. I have an active Mewtwo with DCE, and hit his Keldeo.

He draws, attaches a single Water to the benched Mewtwo and swings to damage my Mewtwo. I can tell from his body language that he has another Energy in hand, so I N him again to one card yet again and KO Keldeo. He top decks an Energy for the win!

trollandtoad.comSo, I know my hopes of making cut are largely left in the dust. I decide that, since I have nothing to play for, this match can be less stressful than previous.

The gentleman who sits opposite me is nice, we chat a bit, and I proceed to have the most horrible start and series of draws a person could dread; from Trubbish start, to N into a second Trubbish, and eventually having to Juniper away two Catchers and three Junipers.

He saw the Trubs, and therefore never bothered to bench a Sigilyph – instead he just pinged away at my Pokémon with Scizor’s attack. I also ran very dry of Energy in this game, which made my ability to Hammerhead his benched Scizor important.

I was clutching my non-EX Terra in hand for most of the game, and when I eventually bring it out to swing at his Scizor, Kevin actually said “Sorry about this…” and proceeded to play Devolution Spray and PlusPower to have Scyther DEX 1HKO my Terrakion NVI.

I was honestly so pleased by this weird play, though it cost me the game, I couldn’t help but admire it.

At this point I realized that the next round would likely cause me to miss my train, and given that missing it would result in being stranded in Nottingham all weekend, while I had a League session to run the next day – well, I decided to drop out of the tournament.

I felt somewhat bad about it, as I didn’t want to negatively affect other players’ resistance with my dropping, but ultimately I knew I had to do it.

On my way back to Edinburgh I was stranded in a train station, assaulted by a drunken lunatic, and vehemently accused of being a fajita cook by another. But that’s a different story.

In discussions I had with a few players, it seems that the more successful builds of decks that run Stage 2 support Pokémon (Darkrai/Hydreigon, Keldeo/Blastoise) have taken to running a 4-0-4 line with 4 Rare Candy, 4 Ultra Ball, and high counts of Skyla.

This is a fairly big change from how builds used to be done, but personal testing online recently confirmed that this sort of setup allows for a fast, early Blastoise/Hydreigon – although it makes getting more than one set up, or one later in the game, a bit harder or less likely.

I thought that the disruption of Garbodor would be enough to compensate for the slow, manual attachment of Energy that my deck required. However, being unable to even Energy Switch proved to be a fairly big disadvantage.

I’d be willing to bet that most if not all of the decks in top cut were capable of this sort of Energy control, via Hydreigon DRX 97, Energy Switch, or something else. Something to keep in mind.

I don’t know if the players were simply more conservative, or if testing indicated to them that Boundaries Crossed cards weren’t up to the hype – still, I saw very few Keldeo/Blastoise, Landorus, or anything of that ilk in the tournament.

Instead the field was primarily Darkrai and Mewtwo dominated, with a smattering of Ho-Oh and Tornadus. In the end, Darkrai/Hydreigon won the tournament.

Anyway, I hope this report has been of some use to you readers. Good luck in your respective upcoming tournaments! 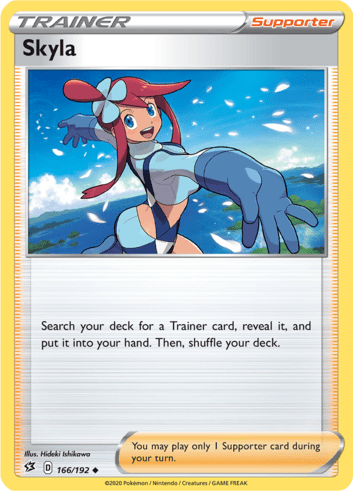