Hi, readers, my name is Lane Tower and I’m a relatively new Pokémon player in the Masters division in Washington state. This is my first serious competitive season, but I’ve been passionate about Pokémon for some time and have applied a lot of time and effort to learning the ins and outs of the Pokémon Trading Card Game.

After snagging 20 Points during the opening day of Cities with a fairly standard RayEels list, I fell into a bit of a rut.

I was confident that my deck was the optimal choice for my meta, and it was performing wonderfully in all the test matches I did in the garage with my dad. Not to mention, it used multiple copies of some of the most expensive cards in format!

However, I noticed on Sunday, that in a lot of my games I just didn’t draw into the cards I needed. (In the garage, my dad lets me look for them if I don’t draw them, but the people in my area are sort of jerks.) This was causing me to lose games I certainly deserved to win.

To make matters worse, I only hit two L Energies off of my Celestial Roar, so I was only able to do 180 damage on turn 2. This was enough to KO his lone Deino, but Kenny easily could have Knocked Out the Tynamo I failed to evolve, and this really upset me.

Welcome to consistency central, everybody! The main goal of the deck is to set up every single game by abusing Lillipup’s Collect attack, and then whittle away your opponent’s HP with a barrage of brutal Tackles.

20 damage might not seem like much, but when you realize you can start attacking as early as turn 1 (I have never managed to do this, but in theory, it IS possible), you should be able to see the inherent power of the deck.

Plus, many of today’s common meta-decks rely on Pokémon-EX, which are easily 9-shotted by Tackle and give up a grotesque 2 Prizes when Knocked Out! Clearly, the deck works. Without further ado, here’s my report!

Round 1 vs. Corey M. with Darkrai/Hydreigon

I start Lillipup, he leads Deino, and I crack a devilish grin knowing that in 3 to 4 turns it will be TACKLED into oblivion. 60 HP is just embarrassing, honestly.

I have the DCE in hand, and contemplate going aggro-Lillipup, but I’m not really one of those YOLO players, and I figure he probably has an Enhanced Hammer in hand, so I play it safe and Cilan for a R Energy.

I only get one, because I don’t want to run the risk of decking out, and when you play Cilan, you don’t actually HAVE to get 3 Energies (read your cards, people!). I attack with Collect, because at this point my hand only has 3 draw Supporters, and I’m worried about getting Hooligans’d.

Unfortunately, I whiff the 4th Supporter and draw a Level Ball. He responds by Ultra Balling 2 D Energy for a Darkrai EX and then Junipers away a Catcher AND a Max Potion. He plays two Dark Patches to the Darkrai then Ultra Balls again to get another Deino.

At this point he only has one card in hand. I can see that it’s a Juniper (he holds his hand low), but I laugh, knowing that his reckless play style leaves him really open to opponent’s Hooligans and Honchkrow DRX.

The next turn I play my Level Ball, and, oh, NO! One of my Lillipup is prized. With luck like this, there really isn’t anything you can do. I scoop up my pup and shake his hand. I say good game, but it wasn’t.

I start Lillipup and he starts Emolga. I cringe when I see it has 70 HP… this behemoth is going to take 4 Tackles before it goes down! He wins the flip (of course!), and then sighs. He attaches a W Energy and uses Call for Family.

He seems really frustrated while searching his deck, because he “Prized all his Piplups and Landoruses,” but he does manage to put two Roselias on the bench. They BOTH have 70 HP. Not my day, I guess.

I Ultra Ball to thin my hand and play Bianca for 3, but I whiff the DCE, so there’s not anything I can do at this point. I’m going to lose a mindless Prize race. I scoop.

Round 3 vs. Tyler N. with RayEels

I win the flip for once! I start Lillipup and he leads a Tynamo. He’s a friend, so I apologize in advance for having to beat him. I explain that we’re both playing seriously, and that I have no hard feelings, etc.

He obviously feels awkward with me being so open with him, so after about ten minutes he tells me to just please start my turn.

I attach a Fire and Collect. He then draws a card and says “Uhh…” over and over and passes. I attach Fire and Tackle. I don’t want to, but this is the twisted game we play. In both Pokémon the TCG and in the American Civil War, it is at times brother vs. brother.

He then plays down an Eelektrik onto his Tynamo and passes. I am shocked. Eelektrik has 90 Hit Points (!!!) and does 50 damage with Electric Ball. That’s just a PlusPower away from a Knock Out. I cannot get a break, so I scoop in frustration.

No one wanted to go to lunch with me, and I got sort of lost on the way back from 7-11 (I had 3 Cheezburger Big Bites, yum!), so I missed this round. Oh well. I decide to give myself the win.

Round 5 vs. Kenny W. with Darkrai/Landorus

This round starts with some drama. Kenny says he’s 4-0 at this point and doesn’t understand how he can be paired down to someone who is 0-4 (of course, I know I’m actually 1-3, but I’m too humble to correct him).

The nice man who is running the tournament takes about thirty minutes to try to solve this by announcing another lunch break, but no one goes for it. Kenny eventually has to suck it up and face me.

I don’t remember exactly what happened, but this was a war. On turn 6 or 7 Kenny manages to Knock Out one of my Lillipups with his Sableye’s Confuse Ray attack, but I have another one ready to start Tackling on the bench.

Unfortunately, on this turn I play an N and whiff Super Rod. I know that with only 2 Lillipup left in my deck, I will be unable to keep streaming Tackles, so I scoop. Terrible game, really. Terrible tournament overall.

That’s pretty much it, guys. Thanks for reading! 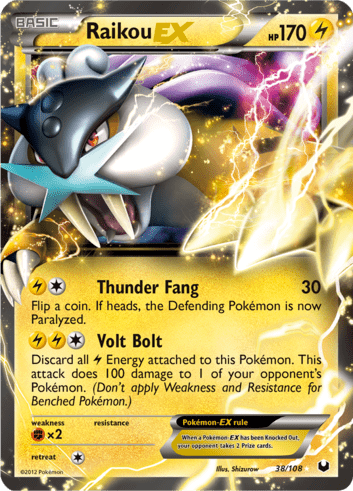