Hello, my name is Jonathan Anthony Denzel Scott and am a Masters player in Virginia. Since you are reading this you might be thinking that this is just another story to get you pumped to play a tier 3 deck only to do horribly at [insert tournament here] e.g. Regionals.

First off, I am by no means any authority – but that is only due to lack of trying. This is my first competitive season but I have been with Pokémon since the beginning. I’ve just now decided to actually play the game of cards that were lining dozens of binders and boxes in my home.

pokemon-paradijs.comOf course I started off strong by almost completely forgetting about Battle Roads till the final weeks. The first one I entered netted me a first place Victory Cup thanks to Empoleon DEX / Accelgor DEX / Mew-EX…

… though I would make drastic modifications to the deck and ruin its consistency by trying to cram in Zoroark BLW to take advantage of its Foul Play attack through Mew-EX’s “Versatile” Ability.

After a horrible showing at Regionals I went underground, and had to ask myself the hard questions. Did I want to place well or play a fun deck? (No offense to those whose favorite Pokémon of all time are Terrakion or Sableye.)

This was weird because before the Darkrai EX card was even spoiled he was one of my favorite Pokémon in general next to Rayquaza and Absol. Though the reason I decided to go with Accelgor was because of the thrill I got while playing it.

There were no “easy games” – even a skilled FluffyChomp player proved difficult. Every game was an involved, hard fought war against another player and her/his chosen units.

I gave myself some requirements next time I played my favorite deck:

With my conditions set here is how the day went at Harrisonburg, VA Cities.

Recurring Themes Throughout the Day

Luckily he informed me that he would not be able to pull off a first turn win and that we would actually play a game.

Tropical Beach was the Stadium of the day as numerous players were running it, and he was no exception using it to build his field. My hand was full with Rare Candies and evolution lines so I could not take advantage of his Tropical Beach, however.

I decided to find Emolga and borrow its Call for Family with Versatile to fill my bench and get the Accelgor army moving to take down the Keldeos to come.

He started to target down my Shelmets and from there knew I would not be able to loop its attack Deck and Cover at all this game. Without any Mewtwo EXs of my own I went into the next best thing – Pokémon: The First Movie Ref # 1 – Mew / Mewtwo Wars.

With Empoleon on board I was able to Attack Command Knock Out weakened Keldeo and Mewtwo EXs, but unlike normal Mewtwo wars since there was a sole survivor of the Accelgor army I could Deck and Cover to avoid the return fire from new Mewtwo EXs.

In the end he had an active Keldeo-EX due to its “Rush In” Ability and a benched Mewtwo EX with a DCE. He knew my deck had no way to get three Energies on a Pokémon easily, so I would need a full bench, a W Energy, an Empoleon on board, and a Pokémon Catcher.

I had Mew-EX and Water in hand, but no Catcher. I could Juniper for Catcher, but if I bench Mew all he needs is a Catcher and an Energy to win the game; also most of my Water was gone so if I was going to go with this plan I would needed to play Mew and give it the Water now, which would mean all he needed was a Catcher to win.

YOLO # 1 – I benched the Mew-EX, played the W Energy, and Junipered to a hand of seven but no Catcher. That is when I remembered that I had not used Diving Draw yet and sacrificed my Emolga to get a Catcher off the second card to win the game.

Round 2 vs. Jimmy with Darkrai EX / Hydreigon DRX 97

I was able to set up early again thanks to Emolga’s Call For Family attack. Knowing Mew would be useless against Darkrai EX due to Resistance and possible Evolites, I had to focus on Empoleon.

I went after his Deino so to prevent the moving of Energy and Max Potions which make my strategy obsolete. Though he did get a Hydreigon on board, he never got Darkrai going in time until the end.

pokemon-paradijs.comI started with Shelmet and Piplup in hand and had to think for a second on what I actually wanted to open with. I had Accelgor in hand and knew Empoleon late game would be more useful than early Deck and Cover. My Shelmet would fall to the mighty phoenix, but at least Piplup was spared early damage or Knock Out.

With few Pokémon on board and an Eviolited Ho-Oh, I knew Empoleon would fall if I tried to take advantage of its Water Weakness so I targeted his benched Terrakion for its Grass Weakness.

Due to some unlucky Rebirth rolls, another Ho-Oh did not come to the Terrakion’s rescue and he decided to go all in with Mewtwo EX since Ho-Oh was still an easy 2 Prizes if we filled our benches.

Pokémon: The First Movie Ref # 2 – With two Mewtwos he was ready for war, so I accepted but with a little field would not be able to 1-shot Mewtwo. Instead I looped Versatile to copy Deck and Cover then Catchered his other Mewtwo and repeated the process hitting each for 100 damage, Poison, and Paralyzation to win the game.

This was one of my most difficult and fun matches of the day. I was starting to think no one was playing Lightning, and I find this to be most of my toughest matchups when testing, even harder than Darkrai variants and Keldeo.

YOLO # 2 – I used Emolga to fill my bench. (Usually if I am unable to Call for Family early on I lose.) She starts with Mew and decides that her bench could use a few Tynamo, so she Versatiles and turns my Emolga against me which I was afraid of.

I damage her Rayquaza EX but back off of it for later and target down Eelektrik with Mew and Attack Command. I decided I would rather her take the early lead and Knock Out my Mew-EXs rather than Knock Out my Empoleon and lose hand advantage and the attack altogether.

She gets a few extra turns due to Blitzle and invincibility due to a successful heads since I am unable to find my Pokémon Catcher that I thought was still in my deck. With my deck looking slim and my Weakness apparent, I knew I had to end it now. I thought I had saw a Catcher in my deck when I Called for Family, but had no luck drawing it so maybe I miscounted and it was Prized.

YOLO # 3 – I benched my Mew-EX and gave it a W Energy, this seems familiar for some reason, and then Junipered for the rest of my deck which landed me my Catcher. Rayquaza was still on board with 70 damage so I Catchered it for the game.

I would not have to wait long as my next opponent was the other Empoleon player in Masters and was also undefeated so far. Unfortunately he started with two Piplups and no way to fill his board. I Deck and Covered them for the win, Knocking them Out between turns, hoping we would cross paths again in top cut for a real match.

pokemon-paradijs.comIt came full circle in top cut as I would find myself against another Keldeo deck. This game was extremely close, but not because of Rush In. In that moment Pokémon Catcher was overshadowed as my least favorite Trainer card as Super Scoop Up after Super Scoop Up hit the board.

A Keldeo, Poisoned and Paralyzed with 100+ damage would instantly Rush Into his hand only to be played again and covered in rain thanks to Blastoise. I could not target down Blastoise since I could not 1-shot it and he could just use Rush In.

Deck and Cover to Super Scoop Up to Gold Potion continued until only Blastoise and Mewtwo were left and my Empoleon was long gone. To 1-shot my field he piled on the Energy onto Mewtwo EX and went in, but this allowed my deck to give me Mew-EX when I needed it and Knock Out a Mewtwo with X Ball instead of Attack Command.

Game two was equally as difficult, but I could not keep the Deck and Cover loop going or keep my Empoleon alive.

With time called we went into SUDDEN DEATH as the first to take a Prize wins. I started but he gets the best thing for the situation, Mewtwo EX.

knowyourmeme.comYOLO #4 – This would be my last YOLO moment as I decided to fill my board and play N putting us both at 1 card in hand. He pulled a Juniper and then a DCE to win the game and go on to win the entire event.

Leaving that Cities and placing third, I have more questions than answers about what I should be playing and am not endorsing the deck.

If anything, a challenge to those who keep playing their tier 3 decks and do not know what to do, finish this sentence next time you play your “fun” deck in a competitive environment:

“If I perform badly with this deck today I will…” 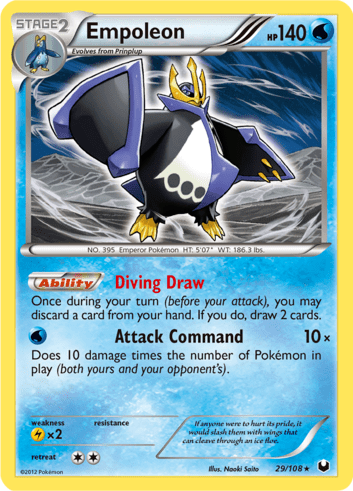