Hello there 6P, I haven’t written in a while but that’s because a little something called school came up and decided that it would get in my way. I went to a grand total of 3 Cities.

BulbapediaIt wasn’t even close. I managed to get a T2 Dragon Burst for 60 on a Squirtle and I swept cleanly from there. I didn’t have a single Prize taken against me.

This game was very very close, it came down to both of us with 1 Prize left and I had 2 cards left in the deck with one turn to win. I was holding the Energy that wins me the game but I needed to get the Catcher off the top of my deck for the win or I would lose the next turn.

I managed to get the Catcher to win the game. Very close game Jacob.

Round 3 vs. Arron Sanyer w/ Mirror

I managed to get a T1 Celestial Roar with 3 Lightning and he scooped basically.

pokemon-paradijs.comI opened Tynamo to his Landorus, and that’s all she wrote folks. A donk at its finest.

Round 5 vs. A kid from Ohio who drove down for Cities w/ Darkrai EX/Mewtwo EX/Landorus-EX

This game also came down all the way to the wire until he managed to put 3 Energy on his board and switch to Night Spear KO my last Rayquaza for the game which I thought I had in the bag.

Yeah that’s right, 2 donks in one day. I lost twice by donk.

ebay.comHe started nothing, I got a T2 Blastoise and was able to swifty roll him.

Steve wasn’t able to get any Energy onto the field during the game and I was able to get set up fairly quickly and I took the game.

Once again Brenden was too afraid to bench a Ho-Oh the entire game so I was able to take Prizes around his Sigilyph DRX until it was just the Sigilyph. I was able to get my Catcher to get the one Ho-Oh he benched the turn before to power up Sigilyph.

One of the funnest opponents I’ve had in a long time.

Round 4 vs. Jimmy Pendarvis w/ Mirror

I’m paired up against the guy who gave me the list I’m playing and I went first. This turned out to be a huge advantage as I got set up incredibly fast and was able to get 6 Water on an active Keldeo and 3 on a benched Mewtwo when he scooped.

Round 5 vs. Matt Rockwell w/ Mirror

trollandtoad.comI was confident that I’d be making cut even if I lost this round, but Matt insists that we play it out. I manage to get set up very quickly and take this game.

Bryan and I are close friends so we were joking around and having fun during this match, which helped make me feel relaxed as the game progressed. At one point I was holding double Juniper, 3 Energy, and 4 Blastoise in my hand with a lone Squirtle and an active Keldeo with 110 damage and a benched Mewtwo with nothing on it.

He KO’d my Active and I topdecked into Computer Search to get Rare Candy and go into the Blastoise. I dumped my hand and got Keldeo and double Energy Retrieval along with 2 Energy so I Rushed In and took a KO on his fresh Keldeo.

From there the game went entirely in my favor.

I got a T2 Blastoise and I rolled him while he was struggling to find resources the entire game.

pokemon-paradijs.comI got a T2 Blastoise and set up incredibly fast while he attempted to keep up but I was too far ahead when he tried to mount a comeback.

I got a T2 Blastoise again and that helped me a lot. He didn’t get one until T3 which left me with the first attack and I managed to get the first Keldeo with 6 Energy on it which gave me the game.

So with that I won my first Cities and in grandeur fashion. I would like to thank Jimmy Pendarvis for giving me cards to play the deck and hope you all had good runs at Cities this season. 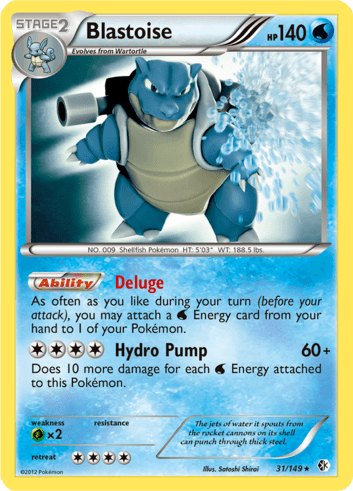