Hello, my name is Antonio Perez. I’ve been playing the Pokémon TCG since Noble Victories was released. I started playing because of Kwandaoren66. He mainly did Pokémon Wi-Fi battles, but then began to upload TCG content, and I was hooked, even to this day. I’ve haven’t had that much success in tournaments, but I feel that I know a lot about the TCG by reading multiple forums and articles, and by playing every single day.

When you hear the term “Hypnobank,” what combos come to mind? Most of you would say Darkrai EX, some would say Tornadus EX, and a select few of you would say Raticate BCR. However, I’m not going to be talking about any of these. Instead, I’m going to talk about Ninetales.

pokemon-paradijs.comFor those of you who do not know, Ninetales was a card released in Dragons Exalted. It is a 90 HP Stage 1 Pokémon with 1 retreat. It has an Ability called “Bright Look,” which, whenever you evolve into Ninetales, acts as a Catcher.

Its single attack is called Hexed Flame, which does 20 damage and 50 more damage for each Special Condition affecting the Defending Pokémon.

At first glance, it looks promising. The Ability is good, providing you with extra Catchers in your deck. Its HP allows it to be searched by Level Ball. However, 90 HP is fragile, being the perfect amount for Darkrai to KO it in one shot.

During the time of BLW-DRX format, Ninetales/Amoonguss was an archetype that received a small amount of hyped. Amoonguss NXD has an Ability that when you evolve into it, you can inflict the Defending Pokémon with Poison and Confusion, letting Ninetales hit for 130 damage (120 base + 10 Poison) with 1 energy. Combine this with Devolution Spray and you have a fast, hard hitting deck.

However, as most people figured out, the deck would always trip up right before it reached the finish line. It didn’t have enough fire power to take down EXs, while they could knock Ninetales and Amoonguss right off the board. After that, the deck has had little to no talk. Until now.

With Plasma Storm out, Ninetales can ditch its old buddy for the new Hypnotoxic Laser. Combined with Virbank City Gym, Ninetales can now do a minimum of 100 damage for 1 energy (70 base + 30 Poison), and 150 if you hit the Sleep flip.

Even though Ninetales can work without Amoonguss, I feel that it’s the combination between Amoonguss and Hypnobank that will help Ninetales that most. This way you have two ways to get two Status Conditions on your opponent.

Here’s a basic list for a Plasma Storm Ninetales/Amoonguss deck:

This leaves you with 10 free spots to do whatever you please with. There are few ways to fill up these spots.

pokemon-paradijs.comYou can thicken the Pokémon or the Items. Bumping up to 3-3 Amoonguss or 4 Hypnotoxic Laser would be good. Two to three Emolga is something to be considered as well. Lastly, more Supporters would do nicely if you feel like 12 is too little.

When 4 Ninetales isn’t enough, and most of the time it won’t be, you have the option of adding in back up attackers. You can include Victini with V-create to 1-shot everything in PlasmaKlang. However, Ninetales already does this, and it doesn’t need a full bench.

You could add in DCE so you can put in Mewtwo EX, Tornadus EX, or both if you so please. These two work well with Hypnotoxic Laser, namely Tornadus EX, and they both hit pretty hard when set up. Plus, they both help the Blastiose matchup, with Mewtwo Knocking Out Keldeos, and Tornadus donking Squirtles.

Lastly, you could add Blend Energy GRPD and Giratina from Plasma Storm. Its first attack for PCC does 50 + 50 more if the Defending Pokémon is affected by a Special Condition. That obviously flows with the theme of the deck. Using Blend Energy also allows the option to use Sableye DEX to bring back your Lasers and Devolution Spray.

With all that said, here’s the final list that I have been testing to positive results:

And that’s pretty much it. I hope you all enjoyed my first article and have learned something from it. Peace out. 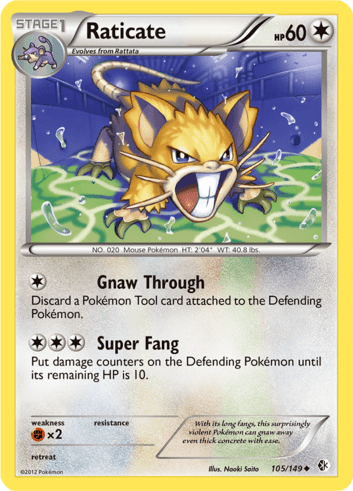