pokemon-paradijs.comLike it or not, Klinklang PLS will be widely played in March, and especially at the beginning of the month.

I think that Plasma Steel variants are bad. I might be wrong and maybe a genius found a way to make a great deck with Klinklang. But my opinion is that a deck that tries not to lose rather than to win can only be bad.

But even if you share my opinion, that PlasmaKlang is a bad deck, I still very much recommended to train against it, and if necessary, proceed with minor changes to your decklist. Because there will be always someone playing Klinklang, you should be prepared to play against it, especially in Swiss rounds.

Victorious warriors win first and then go to war, while defeated warriors go to war and then seek to win.

After testing for more than one month, here are some tips and techs that you may want to test yourself before States and Spring Regionals.

First of all, let’s have a look to the weaknesses of the deck. Because Klinklang only protects Metal type Pokémon, we can easily picture all its viable attackers:

As you can see, there are only a handful of viable Metal attackers, and they are not that great. We can deduce two common points shared between these Pokémon:

What conclusions can we draw from this information?

We may say that Plasma Steel decks will very likely not do significant damage before turn 3, and streaming attackers will not be easy for them because of the lack of energy acceleration. If you KO their fully charged attacker before turn 5, you probably have the game in the pocket, even if they play Klinklang BLW. So the best way to stop Plasma Steel is to have an attacker able to do the job in 4 turns.

The Fire Weakness is another thing that we may exploit in order to accomplish the task. Lucario does not have Fire Weakness, but 100 HP and 3 energies make it an easy 1HKO or 2HKO for most of the counters at our disposal.

Nota bene that Cobalion-EX is very likely to be the main attacker, but Cobalion NVI and Registeel are also frequent attackers in Plasma Steel decks.

It is easy to be brave behind a castle wall.

pokemon-paradijs.comWhen you are playing Speed Darkrai or Hammertime, you will probably find Klinklang a difficult matchup, especially without preparation. One of the ways to preserve your chances against Plasma Steel is to use Sableye to Catcher Stall and Poison to death the Klinklang.

With such a huge Retreat Cost and the limitation of 4 Switches maximum (be aware of a surprise Scramble Switch), the opponent may end up stuck with this unwanted Pokémon in the Active Spot.

If you play Hammertime, the matchup may actually be very winnable because if they have no energies left, they can’t hurt you. Once they are powerless, you can slowly kill them with Confuse Ray and Poison, playing quickly enough in order to take the lead on the Prizes before time is called.

If you play Speed Darkrai you will not have an easy time. But if you setup your Darkrai on turn 2 and they don’t have Plasma Steel up, you may outspeed the deck and take the lead on Prizes, maybe even preventing Klinklang from hitting the field.

If you take 2 or 3 Prizes and then they do get Plasma Steel in play, you may even Catcher stall them and take 1 or 2 more Prizes. This might be enough, because Klinklang decks are slow and it can take a long time before they catch you on Prizes.

Darkrai EX / Hydreigon is probably the deck that has least problems against Klinklang decks, because it can tech Giratina EX easily. It was an already known tech against Sigilyph, and this tech works great against Plasma Steel as well. You can hit and heal more quickly and easily than can their attackers.

And if Ginatina is not enough, you will have your Hydreigon ready to 1HKO Klinklang as quickly as they came. Plasma Steel should not be a big deal if you play it.

pokemon-paradijs.comIf you have the ability to have a full bench quickly and easily, then Victini (Benchtini) is your best friend! For two energies, and assuming that your bench is full, you can 1HKO any Metal Pokémon.

I think that this tech fits well in Darkrai / Hydreigon, Blastoise variants, and Eelektrik variants. These decks often have their bench full and enough energy acceleration to make a Victini ready to strike in one turn.

Be sure to practice your Plasma Steel matchup! If you play Victini wrong… it might cost you the victory. It would be for example a mistake to put Victini on the bench if it cannot KO the opponent’s attacker that turn. What awaits you next turn is probably a Pokémon Catcher and Steel Bullet to the face for a KO.

The downside of Victini is the 70 HP. It is revenge killed by an eventual Keldeo (but if they play it, good for you because have two potential Prizes) or any powered up attacker. This is why you usually absolutely need the Super Rod in your deck.

I tested quite this tech quite a lot. It works absolutely great in RayEels. It turned my RayEels matchup against Klinklang to 80/20.

It was not my favorite card against Klinklang at first, but the more I look to Moltres, the more I think that it is a decent tech in Blastoise decks.

It fits perfect in my opinion in Blastoise/Keldeo/Black Kyurem, because it is not as easy as RayEels to have a full bench. It is true that Moltress attack discards a R Energy, but it is also true that your Blastoise probably relies on Energy Retrieval and can get it right back after an attack.

Moltres cannot be 1HKO by any opponent’s Metal main attacker! This is a very good thing because that means that you can take the risk to let it sit one turn on the bench while trying to get the right energies. And if you start on a game with Moltres, which would not be the best start, at least you cannot be donked.

pokemon-paradijs.comThere is no hard counter in Big Basics decks against Plasma Steel. But actually that does not mean that it has a bad matchup. It is not rare to donk a Klink, as 60 HP is a magic number for Hammer Head or Blow Through and Hypnotoxic Laser.

Terrakion and Bouffalant might do the job for you too. With Retaliate + Hypnotoxic Laser, and then Land Crush you can 2HKO Cobalion-EX for 2 Prizes, and once they kill your Terrakion, a Retaliate or Gold Breaker might take a revenge kill.

With Exp. Share, Energy Switch, Hypnotoxic, and because you take 2 Prizes for a Cobalion-EX/Registeel-EX and they only take one for your Pokémon, you might take the lead on Prizes and win the game.

History tells us that there is no wall than cannot be breached. The great wall, Carthage, Constantinople, etc… No matter how big the wall is, there is always a good tech to achieve the victory.

Klinklang is not really a good deck, in my opinion. And once people know how to play against, I believe that it will be even more considered a bad deck. Now that you have some techs to fit in your deck, you have all the weapons now to improve your Klinklang matchup. 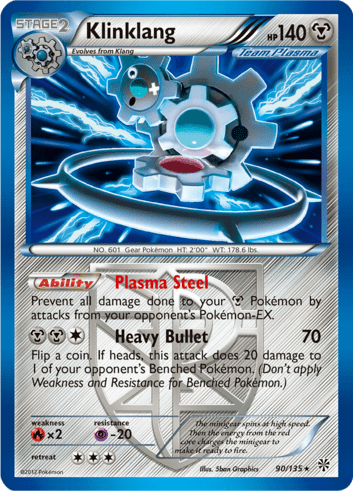