This past Saturday I attended Cumbernauld Regionals in Scotland with a massive convoy of friends and teammates traveling in two cars and a train, around 15 players in all. I had been preparing to play a rogue deck for a few weeks, as there’s no deck in the meta that I genuinely enjoy playing, so I’d put it through its paces and settled on this eventual decklist, analysis to follow the report.

While I knew my deck was legitimately competitive, I also knew that a number of very skilled players would be traveling up to Cumbernauld – especially given that London Regionals, held on the same day, was fully booked.

Due to time constraints, the tournament would have one less Swiss round than usually indicated with this number of players, and the Top 4 cut would be best of one match. Players were understandably disappointed with these changes, but the tournament was soon underway and everyone had games to think about.

Round 1 vs. Scott w/ Landorus/Bouffalant

pokechampion.tumblr.comGiven that teammates and friends of mine comprised nearly half the field, I should not have been surprised to end up facing off against Scott. However due to playtesting the previous evening I am aware of what deck Scott is running, which has me concerned.

Add to that the fact that he’s an incredibly good player with a knowledge of my deck that managed to remove the surprise factor, AND I’ve never managed to beat him in a tournament before… well, I’m not too pleased. We roll, and I get first turn.

I flip my active – Lugia EX. He flips his – Bouffalant.

I look at my hand.

I have the donk.

I immediately am filled with both elation that I’ve won, and a horrible guilty feeling. I apologize to Scott, attach DCE, Colress Machine, and Skyla for the same. Plasma Gale for the KO.

Scott was, as always, incredible gentlemanly about it. We played it out while we waited for next pairings, and he beat me, though narrowly.

Round 2 vs. Michael w/ Darkrai/Lasers/Victini

Here I am, paired once more against a player I have never beaten in a tournament. Great. Michael is another talented player, but when we flip I know the advantage is mine. He starts Sableye and benched Victini, I start Lugia and draw 4 Prizes by Plasma Storm-ing both of them by turn three. Michael is now down to a lone Darkrai which is fully charged.

I Skyla for Scramble Switch, and get the Snorlax Teampact for 180, winning the match.

Round 3 vs. Dominic w/ Keldeo/Blastoise/Black Kyurem

Dominic is a friend and teammate from my League. I know his deck well enough that I am totally aware this match is down to who can set up faster. Added to that is the fact that Dom has improved massively when it comes to competitive play and deck-building recently, and I’m in no way confident that I can manage this match.

I don’t remember all the details, but Dominic managed to Knock Out a Giratina or two before I started steamrolling with Snorlax, whereupon I had the momentum to take the game. If his Crystal Wall hadn’t been prized, I suspect it would have been far more difficult to pull off!

Round 4 vs. Darren w/ Klinklang/Cobalion

Here I am, 3-0 in the last round of Swiss, and I get paired down to my worst matchup. Righteous Edge wreaks havoc against all my Special Energies, and Lugia is dead weight. I manage to take advantage of my opponent’s Tropical Beach for a few turns before replacing it with Virbank, but at some point I foolishly misplay by attaching a DCE to Lugia, and I just never quite recover from that.

It’s close, but in the end Darren secures victory.

At this point I’m pleased to have done so well with a unique rogue I built, and I suspect that top cut is out of my reach, so when standings are posted I’m astonished to find myself in 3rd after Swiss. And paired against Darren again. Oh boy.

Now, I don’t fancy my chances much. Darren has handily beaten me once, and while I wouldn’t call it a walkover or anything, I was clearly not on my best footing against his deck.

I start Lugia to his Klink, and manage over a couple turns to Plasma Gale two Klinks to draw 4 Prizes, then Teampact a Klinklang. He managed to N me to one and Catcher-stall by grabbing a benched Snorlax.

He got mostly set up, and was prepping a Cobalion NVI to KO my Snorlax, while I sat and passed for a number of turns until I got Juniper and snagged Switch, securing the win.

This game contained one of the best first turns I could have gotten, and Charles’ response was equally good. I won the roll and started Giratina to his Landorus-EX, attached and double Colress Machine’d, then HTL’d and Hexed for 100 + 10 Poison damage. I was incredibly pleased with this as a start!

Then Charles benched a Trubbish, double Switched, and used Max Potion! It was such a good, lucky play I had to appreciate it. The game continued apace with us trading KOs, but in the end a heavily damaged benched Snorlax took the Hammerhead snipe for Charles to draw his final prize.

It was a very enjoyable, close match, and I think we both had a good time playing against one another. Charles got a well-deserved win and drew closer to the invite, and I wish him luck in getting to the 400 points!

I encountered variants of this deck on TCGO immediately after the Plasma Storm set was released. Many builds were definitely sub-optimal, utilizing Plasma Durant, or Rotom, or even one of the legendary bird EXs. I usually had no problems with these decks, and after a while I stopped encountering them.

However I was intrigued – I saw potential, especially in Snorlax and Lugia EX with Colress Machine and HTL/Virbank. I started messing around with builds of the deck, and over the weeks it gradually evolved into this list. There’s room for variation, I’m sure, but I went with a consistent and straightforward build. Here are some card explanations.

pokemon-paradijs.comSnorlax is a beast. People think that because of his CCCCC energy requirement for Teampact, Snorlax isn’t a playable card – it’s a steep price, to be sure. However, paired with Block and a very reasonable HP of 130 for a non-EX Basic, this makes the sleepy guy a very viable card in this format.

Any deck that relies upon retreating (RayEels, Darkrai, anything running Emolga) will be easily stalled with Block while you set up a benched Snorlax to roll over their big hitters. Very few attackers one-hit Snorlax, so the Prize exchange is likely to be in your favor, especially if you’re KOing EXs.

And if a Snorlax gets damaged, you may even have recourse to Scramble Switch to power a fresh one from the bench. Also, he’s searchable by Heavy Ball. It’s pretty sweet, I gotta admit.

Giratina isn’t ideal, although it has some of the same advantages that Snorlax has – 130 HP and searchable by Heavy Ball, for example. Giratina is useful for decent damage output, and Hexing Mewtwo after HTL for the 1HKO. Giratina’s second attack, Shadow Claw, is underwhelming for PPCC but allows some disruption to the opponent’s in-hand resources, and again 1HKOs Mewtwo, this time without HTL being necessary.

Dark Weakness is rough, but bearable, as Giratina is simply a bench-filler for Teampact in that matchup.

As you can tell from my report, Lugia EX is a real asset. Overflow is an incredible Ability, further putting the Prize exchange in your favor. With my build you cannot search Lugia EX, though! Early builds included an Ultra Ball or two, but I was hesitant to play them when they showed up in my hand, as few cards in this deck end up being a dead-draw – these resources are almost perpetually useful, and to discard them can really hurt.

So you have to draw into Lugia by chance, and that can be a bit uncomfortable – but in execution it actually functions just fine.

It powers up Giratina’s Hex. It allows you to compensate for an empty bench space when Teampacting an EX. It’s indispensable in this deck even more than in many others. A perfect fit.

The only ACE SPEC for this deck. Allows surprise Plasma Gales for the win, switching Snorlax with a freshly powered and undamaged one from the bench, and other such options. If you try this deck out, take note of your Scramble Switches – many games are won and lost on the use of this puppy late-game.

pokemon-paradijs.comI so badly wish I had managed to find space for Max Potion in this deck. Especially given how often the deck requires you to have energy-less active Pokémon to soak hits and stall for setup. Additionally it would be useful to heal a ‘Mon you just Scramble Switched energy from.

Being able to recover KO’d Pokémon and discarded P Energy would be nice in the late game, especially when energy can be completely gone after a lengthy battle.

Landorus can set up KOs on benched Giratina and Snorlax, and Eviolite would be a nice defense against that.

While the Garbodor matchup isn’t massively unfavourable, it does tend to make Lugia dead weight. In addition, being able to discard Eviolites that might stop Snorlax from 1HKOing EXs could be very useful.

Anyway, thanks for reading and I hope you’ve enjoyed the article. If you decide to run this deck, please let me know about your experiences. I’d be happy to answer any questions in the comments! 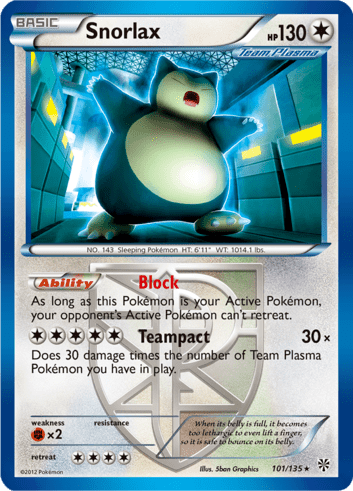