pokemon-paradijs.comHello SixPrizes reader, congratulations on clicking the article even though it has Articuno in the title. Before the release of Plasma Storm everyone and their PokéMothers were hyped for Lugia EX. Players were buying Lugia sleeves, Lugia deck boxes, and even Lugia underwear.

Unfortunately cards like Deoxys EX and Plasma Ball were not released in the same set. A similar situation occurred when Ether was spoiled and hyped to be a great Energy acceleration tool for Landorus-EX. When Ether did not come out in the set but rather a set later, the Ether and Pokédex combo was all but forgotten.

This is just one example of technology that was overshadowed by more straight forward options. The tech that eclipsed Ether and Pokédex was Hypnotoxic Laser and Virbank City Gym. This gave players more ways to add damage between turns even without attacking and possibly stalling the opponent through the sleep status condition.

How does Articuno come into the mix, you might ask? Well, as a fan of the Empoleon/Accelgor deck, guaranteed status conditions and type advantages is my bread and butter. Articuno does not have an Ability like Overflow but for a Plasma Energy in conjunction with its regular Energy cost it causes paralyzation.

Paralyzation is not as big as it once was thanks to Keldeo-EX and its Rush In Ability, but thankfully Articuno can be an asset even without ever using Frost Prison. Its first attack Blizzard for a Water and two C Energy does 60 damage and hits the bench for 10 each. This equates to a weaker but easier version of Darkrai’s Night Spear.

Here are some of the ways it can be done:

These can be done by combining Plasma technology with Pokédex and Ether and allows Articuno to pull off a turn one Blizzard fairly easily. Below is the deck I piloted for Virginia, Delaware and New Jersey States based on this concept with changes between the three as I played it more.

I finished 4-3 all three states which I am proud of for a deck that does not include Keldeo-EX, Darkrai EX, Rayquaza EX, or Klinklang and believe that if a more seasoned player had piloted the deck it could have made a top 16 showing.

pokechampion.tumblr.comDuring VA States the deck contained one copy of Lugia EX as a target for Scramble Switch and Colress Machine giving me the ability to take 3 Prizes in clutch situations.

Lugia never made a showing until my seventh round where if I won the match I would be 5-2 with my losses being to the undefeated player and others that were already guaranteed a top 16 spot. I started with Lugia against Darkari Lasers; Lugia fell asleep due to Hypnotoxic Laser and never woke up even when it was fully powered up.

The deck at this time also contained a couple copies of Recycle which allowed me to reuse Scramble Switch and place basic energy on top of my deck for Ether.

Lastly one of my friends who was running a Ho-Oh build, and also made my play-mat, decided to see if Full Heal was worth a single spot. I ran one copy of Full Heal and thought that it would allow me more options so that I would not always have to switch out of sleep and/or poison conditions. Though whenever I fell asleep I did not have Skyla or Full Heal and when I had Full Heal in hand I was not under any status conditions.

My worst matchup was Klinklang which I did not play at all during VA States but got paired against first round here. After this I decided to run more Bouffalant so to give myself more Pokémon that could deal damage if Klinklang got set up and reduce the number of mulligans I had been getting.

The final deck that I am the most happy with plays no copies of Lugia EX, Recycle, or Full Heal and focuses primarily on getting Energy on the board as soon as possible.

I decided to not play Mewtwo because I did not want to fall into Mewtwo wars even though I considered the idea of Mewtwo with no Weakness thanks to Plasma Energy and Plasma Frigate.

Bouffalant was added as a non-Pokémon-EX to help the Klinklang matchup even though I was fine with losing to Klinklang as I did not expect this to make a big showing. It also helped during New Jersey States against Sigilyph that I ran into in players’ Big Basics decks.

With Plasma Energy and Plasma Frigate Bouffalant was able to go toe-to-toe with Landorus without fear of being Land’s Judgemented.

Also with the added tech I was able to pull off turn one Gold Breaker with ease allowing for early damage on Keldeo-EX, Darkrai EX, and Tornadus EX and knockouts on Trubbish, Tynamo, and Squirtle:

All the turn one possibilities I had with Bouffalant I also had with Tornadus EX but even more due to Blow Through.

Plasma Frigate allowed me to do 60 on my first turn but also remove my Lightning Weakness for those that teched in Zekrom for Klinklang or against Raikou-EX.

pokemon-paradijs.comI did not go with Virbank City Gym as it did not add to the theme of getting Energy on board as soon as possible and allowed my opponent to use their Hypnotoxic Lasers to their full extent even if they did not play the gym.

I decided to go with a Stadium wars approach and only play a gym that might benefit me and never benefit my opponent; Tornadus EX excluded of course unless they made a Stadium card that once played became something else maybe like “Once this Stadium is played, no other Stadium cards can be played and all cards discarded are sent to the Lost Zone instead of the discard pile.”

On that subject they should think about making Stadium ACE SPEC cards, then they could reprint cards such as Broken Time-Space and Space Center. But enough ranting and fan-fiction for one article — but seriously reprint Space Center.

Even without running Recycle in the deck, the ability to move all my Energy be it Water, Plasma, or Double Colorless is too powerful to pass up. Especially with Hypnotoxic Laser being used in just about any deck that can find room, another switch option is needed but also allows you to move needed Energy off of heavily damaged Pokémon.

With Plasma Freeze around the corner players will be testing out combos with Thundurus EX and Deoxys-EX and in general Plasma Pokémon will be more viable. Soon Plasma decks may go from a rogue concept to the top decks and only time will tell if Articuno-EX will have a place with these heavy hitters.

Also, here is my play-mat Jake Culley, the Ho-Oh player, made for me. He does custom work and all he needs is a white play-mat and your idea. 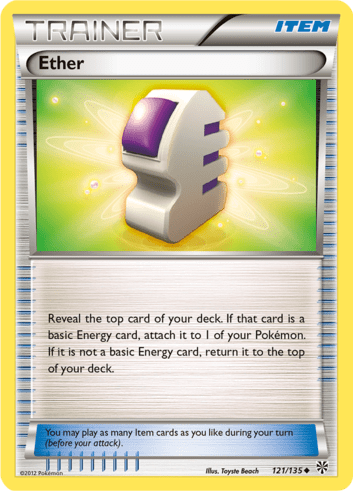