fyeahcontroversialcharacters.tumblr.comWassup! I am pretty new at this, so please feel free to critique my writing so I can improve. Anyhoo, today I will be talking about a card that I have quite a bit of experience with: Garbodor DRX!

The Trash Heap Pokémon is the only card in the format that has the power to lock Abilities shut down the likes of Blastoise, Darkrai, Keldeo, Hydreigon, Klinklang, and Eelektrik. This article will serve as a both a tournament report and an analysis of Garbodor.

This is the list I brought to State Championships.

The Trash Heap Pokémon does everything for me. He is in there solely to shut down the following cards: Blastoise BCR, Keldeo-EX, Darkrai EX, Hydreigon DRX 97, Eelektrik NVI, Klinklang BLW, Klinklang PLS, Lugia EX, Sigilyph DRX, and Bouffalant DRX.

Cobalion’s primary purpose in this deck is to shut down Mewtwos and Lugias with Righteous Edge, provide a cheap 30 damage, and also to go through Eviolite, Sigilyph, and Klinklang PLS with Steel Bullet.

The sweeper of my deck, Mewtwo allows me to sweep through my opponent’s Pokémon when charged enough. It also serves as a nice Keldeo and Mewtwo counter.

Tornadus is a nice force coming off the Bench, setting up quickly for 100 damage with Power Blast. He also aids in the chance for a donk with Blow Through and provides a Fighting counter.

I only ran three on a suggestion from a member of my league, who said that if you are taking Prizes quickly, you are never going to play that N because you would be shrinking your hand size. It worked well for me and allowed me to run a third Skyla.

Skyla allows me to dig out a Tool, Hypnotoxic Laser, Virbank City Gym, or any other Trainer I need. An excellent utility card.

Hypnotoxic Laser gave me the ability to generate an insane amount of early offense, often setting me up with a solid Prize lead to coast to the finish.

Exp. Share gives me a Tool for Garbodor and a method of Energy acceleration. It proved to be very useful in setting up my attackers.

Computer Search gives me the ability to dig out the card I need, when I need it. Computer Search is incredibly useful in digging out Double Colorless Energy as well as M Energy.

Virbank City Gym allows me to bump up the damage I can do with Hypnotoxic Laser as well as increase Tornadus EX’s Blow Through damage to 60.

Now, onto the tournament report!

I got there at about nine, got my deck checked, received my wristband, die, and promo Vaporeon, and sat down to talk with the people in my league. There were a record high number of players there for a New Mexico State Championships, with 13 Juniors, 23 Seniors, and 107 Masters. The Masters would have 7 rounds of Swiss and a top 16.

Round 1 vs. Jacob w/ Bouffalant/Siglyph/Grass Types

This round went pretty well and was an easy win. I only attached a DCE to my Mewtwo and a Metal to my Cobalion all game, but played all four Hypnotoxic Lasers. He only took 1 Prize and scooped when I had 1 Prize left.

There were a lot of people playing Big Basics there, and many of them made the top cut. He went first and opened V-create Victini to my two Trubbish. He attached a Plasma Energy, played a Hypnotoxic Laser, got a heads, and passed. I got a tails on the sleep flip for my Trubbish.

I then drew, Ultra Balled for a Cobalion but they were both Prized, so I took a Mewtwo. I had the M Energy in my hand and Skyla for the early pressure, so being able to get a Cobalion would have been really nice. I attached the Metal to Mewtwo, got a Laser with my Skyla, played it, got tails, and passed.

I then had 20 damage on my Active Trubbish that was still asleep after I missed another flip and he had 10 on his Victini. He then drew for his turn, played Virbank City Gym, played Bianca for four, got absolutely nothing, and passed.

I then passed and his Victini got Knocked Out from Poison damage. He had no Benched Pokémon. I felt bad for him afterward, but took the win.

Sorry, I cannot remember your name! Anyway, we both got off to decent starts, taking Prizes until we were both at around 2 Prizes left. By that point I had a Cobalion firing on all cylinders and a Garbodor set up, which prevented him from using the Max Potion/Hydreigon Prize denial.

I then finished him off with a Mewtwo and Catcher to kill his retreated Darkrai.

It was now lunch break. I got in trouble with the judges because I was playing Lasers and did not have a poison counter. If I could not get one before the next round, I would receive a Prize penalty in the next game. I went with some of the guys from our league to a Burger King and got lunch. I then got a poison counter on the way back from lunch. Whew!

Round 4 vs. Amber w/ Darkrai/LaserBank

I don’t remember too much of this game except that it came down to the wire. I had 1 Prize left and she had two. I had a poisoned Cobalion with thirty damage on it. She had an Active Darkrai that was poisoned as well. She Night Speared, which put my Cobalion with 150 damage on it and her Darkrai with 160 damage on it.

I passed for the game and won in a nail-biter.

He opened Black Kyurem EX to my Mewtwo EX. I went first and swept his entire field with a Mewtwo, not giving up a single Prize.

At this point I was pretty excited because three of the four undefeated were from our league and I was pretty much guaranteed to make the cut.

Round 5 vs. Caleb w/ Big Basics

I got swept in this one. He opened Landorus to my Trubbish. He had a Tornadus EX and three Landorus-EX out by turn 3. I failed to take a Prize.

Round 7 vs. Jade w/ Darkrai/Keldeo/LaserBank

This game was close the whole way through. I kept him from using the Keldeo-EX to get the poison off of his Darkrai with Garbodor. On the last turn of the game he Junipered and got the Hypnotoxic Laser to achieve the 120 damage he needed to KO my Cobalion with a Night Spear.

After a long period of nervousness, the top cut was announced and I was in it! I earned the 10th seed in top cut. Four of the sixteen that made the cut were from our league, and my first round opponent was one of them. After the judges did the second deck check, we sat down at the table and began to shuffle.

The first game I sacrificed all three of my Garbodors but stormed back with a fully loaded Mewtwo to win the game.

The second game I could not muster any offense. I did get a Mewtwo going but he KO’d it with a Black Ballista.

In the third game I took a quick 1 Prize lead and the game went to time. I had turn zero. I had a Mewtwo active with a Double Colorless and a Metal on it and he had a Keldeo active with two Energy and 10 damage on it and a benched Blastoise.

On turn one he Catchered up my benched Garbodor, attached two Energy to a Keldeo, Rushed In to get his damaged Keldeo out the active, benched a Black Kyurem EX, attached 2 W Energy to it, and passed. I had a Switch and a Skyla in my hand.

I drew a M Energy, attached it to my benched Tornadus EX, played the Switch to promote my Mewtwo, played the Skyla for a Catcher, brought up his Keldeo, and KO’ed it with X Ball for the win.

He was pretty mad that I had the two cards I needed to win the game in my hand, but was a good sport about losing.

My opponent in this game had beaten the 2nd seed in the first round to advance. The first game he KO’ed my Cobalion with a V-create Victini but I got a quick Garbodor set up and swept him with a high-powered Mewtwo. The second game he only took 1 Prize. He did not play Mewtwo, which made the round a whole lot easier. I swept him with a Mewtwo again.

I get a great setup to start, getting a Mewtwo, DCE, Hypnotoxic Laser, and Virbank City Gym to start the game but dead-draw the rest of the way, which cost me the first game, only taking 2 Prizes off of a Tornadus EX.

After that game I was pretty frustrated for not using an Ultra Ball to get another Pokémon on my bench. But you get what you get, and I was pretty satisfied with making it as far as Top 4 at such a large tournament.

All in all, I took 3rd out of a field of 107 Masters. I won a new playmat, a Victini hat, a Semi-Finalist trophy, and 18 booster packs. I managed to pull my second Victory Piece, three Colress, three Plasma Energy, two Colress Machine, a Klinklang, and a shiny Charizard.

Garbodor is truly an anti-meta card. Almost all decks currently in the format rely on Abilities to set up Pokémon and also to maintain a high damage output. Garbodor shuts them all down, allowing the attackers of the Garbodor deck to dominate.

This list is focused more on consistency and getting a quick Articuno set up. The Lasers are included to generate knockouts going into your turn, allowing for an even stronger lock similar to Accelgor. Virbank City Gym is not included because it makes the lock more difficult to achieve because the higher damage output from poison that the gym creates makes it harder to control.

Colress Machine is a really fun form of Energy acceleration to use and is useful in generating a first turn Blizzard, which, when combined with a Hypnotoxic Laser, can generate a donk on Sableyes and Emolgas, two of the most popular starter Pokémon in the format.

Garbodor is, in my opinion, the top Tier 2 deck in the format right now. It has access to powerful Big Basic attackers such as Landorus-EX, Mewtwo EX, and Tornadus EX. It also has the ability to shut down the best decks in the meta, including PlasmaKlang, Darkrai/LaserBank, RayEels, Keldeo/Blastoise, and Darkrai/Hydreigon. I believe that it deserves a nod as a possible Tier 1 deck. 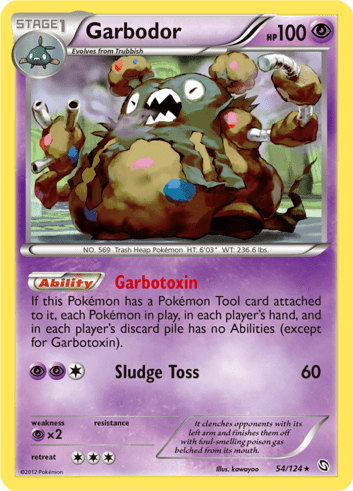