Hey guys! It has been a while. The last time I wrote was to cover my Top 64 Nationals run with Darkrai EX/Smeargle UD. I played the same deck for Worlds with Lost Removers and one more Darkrai EX in lieu of Super Scoop Up, and I went 5-2 to place 25th, only losing to Curran Hill and SixPrizes’ own Jay Hornung. I wish that I could have cut, but looking back on it I am content with my performance and deck choice.

I started this season with Garchomp/Altaria, quickly switching to an Eelektrik/Mewtwo EX deck that I piloted for the majority of Fall Battle Roads. At Fall Regionals, I decided to play Darkrai EX/Terrakion, and I continued to play Darkrai EX variants through City, State, and the Winter Regional Championships.

Though this deck is a bit outdated, it was so good and I liked it way too much to not write about it at all. Here is the deck that I played for City Championships and Winter Regionals, netting 200 Championship Points.

This deck was inspired by Michael Diaz, who tested a Darkrai EX/Sableye/Terrakion/Landorus-EX/Bouffalant/Mewtwo EX/Keldeo-EX deck against me. I liked the idea of having different attackers to assist Darkrai EX and take advantage of Dark Cloak, but I decided to take the deck in a bit of a different direction. I later learned that Henry Prior had tested a similar deck prior to Fall Regionals.

The idea behind the deck is that Darkrai EX/Sableye is incredibly strong, and Terrakion can combat other Darkrai EX decks while Shaymin EX gives Keldeo-EX a run for its money. Ho-Oh EX gives you a way to get Energy in play late game and is a decent attacker against Fighting type Pokémon as well. Energy Switch is the MVP of the deck, creating all of these possibilities for different attackers.

With the release of Hypnotoxic Laser, I retired the deck due to the fact that Retaliate KOs would be more difficult to pull off and neither Switch nor Keldeo-EX was included in the deck.

With State Championships approaching, I was fairly confident in my Darkrai EX/Sableye with Virbank City Gym and Hypnotoxic Laser. It was fairly fast, consistent, and seemed to have pretty 50-50 matchups across the board. That is my kind of deck.

I played week one of States in Louisiana starting off 4-0 and losing the next three matches to finish at 17th place. We had seven rounds and a top 16 cut. Needless to say, I was disappointed in my performance.

The following week, I competed in the Arkansas State Championship. There were only going to be 6 rounds and a top 8 cut as we had just 50 or so Masters. I played almost the same decklist, dropping one Sableye for another Energy Switch. I do not feel that this change affected how the deck played to any great extent.

I finished the day with a record of 3-3. By this point, I was incredibly crestfallen, ready to kiss my chance at a Worlds invite goodbye and willing to play any deck week three to try to keep it.

After talking with some friends and tossing around the idea of playing Big Basics, again it was Michael Diaz who convinced me to stick with Darkrai EX for week three. I traveled to Nashville to play in the Tennessee State Championship where we had seven rounds and a top 16.

I played almost the same list as the week before, dropping the two Dark Claw for two Max Potion. Unlike the change from the week before, I feel that this change was huge and definitely the correct call for the day.

I was incredibly happy with my performance for the day. This was my seventh time participating in the Tennessee State Championship, and I finally managed to win the title. I also earned 100 Championship Points to bring me to a total of 395.

Now, in all honesty, I ran hot. I drew the right cards when I needed them and played against all even or better matchups. I flipped heads on Laser and sleep flips more than I flipped tails. I am not saying that I didn’t play well or play a good deck, because I did, but it takes more than a good deck and good plays to win big events. You have to get lucky, too.

The fact that I played basically the same deck for all three weekends of States yielding records of 4-3, 3-3, and 10-1 is just a testament to how you can either have a good day or a bad day, and aside from playing a good deck and making smart plays, there is just not all that much that you can do about it.

With that said, I am still in love with Darkrai EX. I feel that all of its matchups are 50-50 at worst aside from Klinklang, and if I were going to Regionals this weekend, it would be my number one choice.

Also, make sure that whatever deck you choose for Regionals plays at least 14 Supporter/Supporter Search cards. I played 15 with 4 Juniper, 4 N, 2 Bianca, 4 Random Receiver, and 1 Computer Search. I won a few games at States just because I opened with a Supporter and my opponent didn’t.

Some Discussion on Other Decks

Landorus-EX is incredibly strong, putting a lot of pressure on any deck. Darkrai EX and Eelektrik are both victims of Fighting Weakness, and a 30-30 split for one Energy on the first turn is phenomenal.

I think that Bouffalant compliments Landorus-EX exceptionally well. Hammerhead can easily put EXs in range for a Gold Breaker Knock Out. Bouffalant is probably the strongest non-EX attacker in the format, and its Ability is nothing to scoff at either.

In addition to everything else, this deck has a very positive Klinklang matchup if you can manage your Energy correctly.

To me, this deck looks even better on paper than Darkrai EX/Sableye, but I still believe that the bonuses that Darkrai EX gains from Dark Patch, Dark Cloak, and Junk Hunt are just too good. Landorus-EX/Bouffalant comes in a strong second to Darkrai EX for me.

The last deck that I would like to write about for you guys is the deck that I lost to Round 1 of the Arkansas State Championship. “Gothitelle Lock” is really strong if you can manage to set it up. The most difficult matchup is undoubtedly Big Basics, but a Turn 2 Gothitelle is going to put pressure on whatever deck you are up against.

The strategy behind this deck is to set up Gothitelle as quickly as you can. With Ultra Ball, Level Ball, Rare Candy, Skyla, and Tropical Beach, a T2 Gothitelle is very possible. After setting up the first Gothitelle, you set up another one on the bench, evolving from Gothorita.

Then, you can attack with “Deleting Glare” to discard all of your opponent’s Energy via Celebi-EX’s Ability. Victini allows you to reflip if you flip tails the first time. While using “Deleting Glare,” you continue to attach Energy to Gothitelle until you are ready to attack with “Madkenisis.” You absolutely have to keep Gothitelle active the entire game.

The deck does not play any Professor Juniper because you really cannot afford to discard that many cards. I have come very close to decking even without Professor Juniper. “Future Sight” is honestly a really strong attack, and Scramble Switch is definitely my ACE SPEC of choice in this deck.

There you have it. Darkrai EX/Sableye is my number one choice for the Spring Regional Championships with Landorus-EX/Bouffalant coming in a close second. Gothitelle is a cool deck that a more adventurous player might want to give a go, but I would not recommend playing it if you would like to win the event.

To wrap up this article, I have a few closing thoughts about the format and qualifying for Nationals and Worlds.

I personally think that this is the best format that we have had since the rotation prior to Nationals 2011. There are about five defined “meta” decks, but there is still great potential for new decks to shine.

No one deck is just dominating the scene, and first turn losses seem less common than ever. I think that the fact that we have a fairly deep card pool for this format is one reason that there are more viable decks. Also, as much as everyone complains about 180 HP EXs, if you open with one of them you probably won’t lose on the first turn.

I think that the format is in a great state right now, with the only complaint of mine being Hypnotoxic Laser flips. However, these flips are not nearly as crucial and game changing as the Pokémon Reversal flips of Nationals 2011.

I was unaware of the Play Point requirement for Nationals. I play in so many events; I never had to worry about it. I knew that last year the requirement was 10 Points, which I thought was incredibly reasonable, especially when Regional Championships were worth 5 Points.

This season, some players would have to travel quite a bit and compete continuously in order to qualify for Nationals. For those players that would traditionally sit out events most of the year but still went to Nationals, this requirement can be difficult to fulfill.

I do not agree with the increased Play Point requirement for Nationals.

BulbapediaAs far as qualifying for Worlds, I am a huge advocate for the new invite structure. I love the idea of “Here’s the finish line; get there” as opposed to “Every man for himself; top forty players are invited.” I like having the goal of 400 Championship Points. I think that it encourages players to help one another get the invite instead of having cut throat competition for those top forty spots.

The article is entitled “Just a Nickel Shy” because I am currently at 395 Championship Points. I would love to have the chance to earn my invite this weekend with the rest of you, but my mom is making me go to my Senior Prom instead of Regionals. It’s a bit bittersweet seeing as I have not missed a Regional Championship since 2007, but oh well.

I am looking forward to Nationals more than ever though, and I cannot wait to see you all in Indianapolis and hopefully Vancouver! 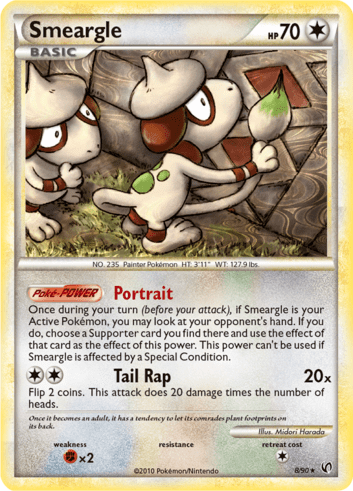