squirtledogg.tumblr.comGreetings, my fellow Pokémon players! For my second article, I am going to focus on one of my favorite decks in the current format: Empoleon!

The first time I ever played Empoleon was for Autumn Battle Roads and I had some success with it, going 3-2 and missing out on packs by two spots. Then I deviated from that build and went to an Empoleon/Mewtwo/Sigilyph build for Cities. I went a combined 5-5, placing 11th and 14th. I then moved on to Garbodor, which I covered in my last article.

I am determined to give Empoleon another shot at Spring Battle Roads. There are four different Empoleon variants that I intend to cover in this article: straight Empoleon, Empoleon/Terrakion, Empoleon/Mewtwo, and Empoleon/Landorus/Dusknoir.

Emolga is one of, if not the best opening Pokémon in the format. For any Energy you can get any two Basic Pokémon out of your deck. Emolga’s free Retreat Cost is another nice aspect, allowing you to retreat into the Pokémon you’ve set up on your bench. Emolga allows you to fill up you bench quickly, helping to maximize the damage you can do with Attack Command.

I have used this card in almost all of my Empoleon builds and it is a very effective search card. It has a solid 90 HP and a one Energy Retreat Cost, which keeps it from being a clunky Bench-sitter. Its Ability, Le Parfum, is a nice compliment to a deck that needs a little help in the search department.

This may be an unpopular choice, but Mew is a huge help in fending off its genetic clone, Mewtwo EX. One of the few things that gives Empoleon trouble is something that will consistently take 1HKOs on your Pokémon. Mewtwo can do that with six energy attached. Mew is an important asset to the deck that can turn the tide of a battle.

I run four of these bad boys because I was told by the man who checked my deck at State Championships that I could not run ten. Aside from that, this card gives Empoleon something that is has been missing: a damage adder. This card can turn 3HKOs into easy 2HKOs simply by adding 30 damage in between turns. Another bonus is the chance of preventing an attack on your Empoleon for one turn.

Ultra Ball does not work in this deck because you are discarding valuable resources when you use it. Instead, Pokémon Communication allows you to replace the card that you removed from your deck, helping to slow down your deck consumption from Diving Draw.

Max Potion is one of the cards that makes Empoleon truly great. It can turn 2HKOs into 3HKOs and drive your opponent crazy as they find they are unable to take a single Prize while you are taking multiple Prizes by Knocking Out their EXs.

You can afford to run a lower count of Switch in this deck because there is nothing that can be Catcher stalled, as the highest Retreat Cost in the deck is two, and that belongs to a card that can attack for one Energy.

This deck requires two Super Rod because of the amount of cards you will be discarding throughout the game. This card is highly useful when you need a couple Basics to bench for Attack Command or to just add three turns to the game.

pokemon-paradijs.comLevel Ball is a great card in this deck, giving you the power to get any Basic you need besides Mew-EX. It is also highly useful because it allows you to get Roserade out for no cost.

Recycle is a very underrated card and is very effective in Empoleon decks. If you hit the heads, all you need is to use Diving Draw and that card is in your hand. This card can be a fifth Catcher, fifth Hypnotoxic Laser, or fourth Max Potion.

Virbank is in this deck to increase the power of Hypnotoxic Laser and to generate as much damage as possible off of it.

This deck is intended to take full advantage of one the greatest advantages Empoleon has over the rest of the format: its ability to win in the Prize trade. Trading 2HKOs is what Empoleon does best, and it only gives up 1 Prize to the two your opponent is losing every time you score a knockout.

The Mew-EX can be dropped for another Basic, such as another Emolga. It can also be dropped for an extra Prinplup. This list is also very consistent and does not fool around with the likes of Blend WLFM and Fighting Energy. The reason for that is that the format is no longer being terrorized by the likes of ZekEels.

Terrakion is highly useful for taking 1HKOs on Darkrai EXs, Lightning type attackers, and 2HKOs on everything else. Its low cost Retaliate attack can provide instant offense off the bench. One of the scourges of Empoleon decks are cards such as Zekrom BLW, Zekrom-EX, and Raikou-EX. Terrakion kills them right back, and in most cases taking 2 Prizes in the process.

Stunfisk is an excellent opening attacker and is the equivalent of a weaker Landorus. Its first attack, Muddy Water, does 20 damage and 20 to any benched Pokémon for one Fighting Energy. This is enough to donk any Tynamo.

Its second attack, Rumble, does 40 damage and prevents the Defending Pokémon from retreating the next turn. Stunfisk is a great starting Pokémon that only surrenders 1 Prize.

The Switch count needs to be higher than the previous build because Terrakion has a four Energy Retreat Cost and Stunfisk has a three Energy Retreat Cost. These two Pokémon can cause you some significant Catcher-stall problems and running higher counts of Switch helps to solve this problem.

Blend Energy is the main reason that Water and Fighting Pokémon are compatible. It provides you with both Water energy for Empoleon and Fighting energy for Terrakion and Stunfisk.

This deck build is designed for offense and for countering Empoleon’s Weakness to Lightning types. It also is very effective against the likes of Darkrai EX. One of the things I personally like about this build is its ability to deal consistent damage regardless of your opponent’s bench.

Energy Switch and Exp. Share are also possible techs, as both cards give you Energy movement that allows you to set up Terrakions quickly.

Mewtwo EX is a very useful attacker in an Empoleon deck. It can take down other Mewtwos, which are capable of sweeping Empoleon completely off the field. It is also an excellent counter to Keldeo-EX and other high-Energy attackers.

There are a few interesting tech options for this version of Empoleon. If you are in a Big Basics heavy area, try dropping the Roserade line, two Water Energy, and a Recycle for two Sigilyph and three Psychic Energy.

Another interesting option is to drop a Mewtwo EX for a Tornadus EX. This, combined with Virbank City Gym and Hypnotoxic Laser, gives you the ability to deal out huge damage very quickly.

Empoleon/Landorus actually made Top 32 at the Utah Regional. The strategy here is to use Landorus-EX for early offense and to put damage all over your opponent’s field. Hypnotoxic Laser and Virbank City Gym are both important to the early offense aspect of this deck.

The next step is to start whacking away with Empoleon and to continue setting up Landorus. There are not a great many tech options here, but a Scramble Switch could make things interesting and help you set up a quick Land’s Judgment.

Colress is a very good 2-of in Empoleon decks and may even be good as a 3-of. Its power in Empoleon decks comes from the need for a full bench that Empoleon has. Colress acts as the Professor Juniper of Empoleon decks because while Empoleon cannot afford to discard vital resources, it does need a powerful draw source. That is what Colress does perfectly.

Recycle is turned into a Dowsing Machine for anything with the correct roll of the dice, and it is especially useful in the Mewtwo build because it allows you to get Double Colorless Energy out of your discard pile. Recycle can be a great 2-of in Empoleon because of its incredible synergy with Diving Draw.

Virizion is a great starter when you have absolutely nothing. She lets you draw two cards for one Energy. And if you’re gutsy enough with your build, you can tech Blend GRPD and Sigilyph, which will give you access to Leaf Wallop, which would give you a nice counter to Blastoise/Keldeo.

Sometimes I find myself in the need of an energy but cannot get one. Energy Search gives the deck a consistency boost and can be easily accessed by Skyla. Often that one Water Energy is what you need to Max Potion away the damage on your Empoleon and to then recharge and use Attack Command.

Cheren gives you an extra three cards into your hand. It is a solid draw supporter in Empoleon decks and helps to supplement Diving Draw.

What Empoleon Gains from Plasma Freeze

In reality every deck gains this. Float Stone is a Tool that gives the Pokémon it is attached to free retreat. This is a massive blow to the power of Hypnotoxic Laser because Keldeo-EX can use Rush In to remove the Poison and Sleep, then retreat for free back into your attacker. Float Stone will also help with retreating Terrakions.

Empoleon does not gain much else from Plasma Freeze, as Ghetsis is not a very good Supporter and there are no other significant cards that can help Empoleon, unless you want to attach a Plasma Badge to Empoleon and bench a couple of Deoxys EX to add damage to Empoleon’s attacks.

Empoleon is one of the most underrated cards in the format. It has three attributes that no other card in the format has: the power to abuse Max Potion, built-in draw support, and it only gives up 1 Prize.

It forces Rayquaza EX to discard three Energy to take only 1 Prize while an Attack Command with a Laser can generate a knockout going into your turn for 2 Prizes. It does very well against Big Basics because it hits the weakness of Landorus-EX and can 1HKO it, beat Tornadus EX by abusing Max Potion, and is not 1HKO’d by Lugia EX.

It is also successful against Darkrai EX because of Max Potion and the Terrakion and Landorus-EX versions are very difficult for Darkrai to beat because of its Weakness to Fighting. Klingklang/Cobalion does not stop Empoleon because it is not an EX.

Roserade is another card that helps Empoleon greatly and is another underrated card that Empoleon takes advantage of. Empoleon has the potential to be a force at Battle Roads and possibly at Nationals as well. 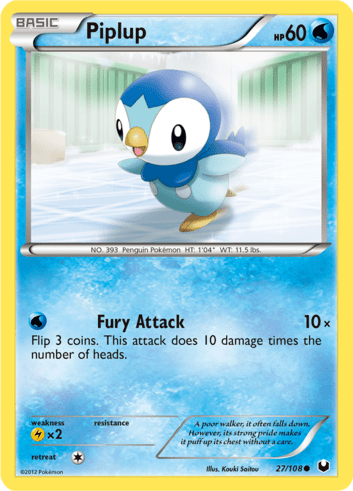