Hello 6P community! It’s been a while since I’ve written an article for this site. I’ve been rather busy, juggling graduate school and preparing for the Evolution Championship Series (for Super Smash Bros. Melee). I figure I’d write about something that I feel newer players have difficulty dealing with: Supporter counts for decks. For the more advanced players, much of what I am writing will seem trivial or naturally intuitive, so bear with me.

How many total Supporters should I play?

As I wrote in my previous article, here’s a table of probabilities for a turn 1 Supporter based on your total Supporters + Pokégear 3.0 (Random Receiver in today’s metagame).

Generally speaking, a range of 11-15 Supporters is great depending on your deck. Decks that have heavy Tropical Beach counts or Pokémon draw engines will tend to play slightly less Supporters whereas other decks may run higher counts. Anything less than 11 and you’ll run into a dead-draw hand 1 out of 4 games. You’ll also risk fizzling out in the mid to late game situations by running too few Supporters.

Alternatively, playing more Supporters will give you more stability and consistency but can also lead to other issues as well. Drawing a new hand with a bunch of Supporters is problematic. This is because of the fact that you can only play 1 Supporter per turn. By playing too many, a larger percentage of your hands will be dead cards. However, having two Supporters in your hand is better than none.

What should my Supporters be?

For the BLW-on format, people frequently complained about the lack of great and consistent Supporters. Professor Oak’s New Theory and Pokémon Collector were both rotated, leaving a gaping hole, which made people frustrated in the past couple of years. However, I do think that now we have a decent pool of Supporters that can be used to make consistent decks.

“Discard your hand and draw 7 cards.”

pokeca-japan.ocnk.bizThis is the only Supporter that I would view as a pure staple in that you should always be playing 4 in your deck. Deck engines are so fast in this metagame that you need to be able to cycle through your deck as quickly as possible to get the necessary cards to setup.

I know for some people there have been really terrible memories of opening a hand such as 3 Professor Juniper + 3 Pokémon Catcher that forces you discard valuable resources. However, keep in mind that this shouldn’t happen so frequently and the benefits of Professor Juniper outweigh those rare situations that may come up in a tournament.

“Draw cards until you have 6 cards in your hand.”

For a while, deckbuilding consisted of whether you preferred Bianca or Cheren as your 9th-12th Supporter slots in your deck. The decision to add Bianca to your deck ultimately depends on your deck’s style. Decks that tend to be more aggressive with Ultra Ball, Computer Search, and other cycling cards (turbo decks, RayEels) will benefit from Bianca, netting a maximum of 6 cards. Decks that tend to conserve cards or build up hands (Empoleon) will be frustrated with using Bianca. Often times, Bianca is a dead card that will net 0-2 cards for your hand.

The one moment in which Bianca shines is when an opponent has N’d you into a small hand and you topdeck a Bianca.

Cheren is the most vanilla of all Supporters. It’s a simple hand-grower. However, in today’s metagame, netting 3 cards does not cut it, when other Supporters will cycle through a deck much quicker.

As a substitute, if you think of using Cheren, 90% of the time Skyla is simply better, since getting a specific card is usually better than drawing 3 random cards. Having large hands is not a luxury in this format because your opponent will frequently counter with an N. However, Cheren does have its niche in Empoleon decks because of their great synergy.

Initially, Ghetsis received lots of hype when the translations were first released. People were citing that it was “broken” and was a “4-of” in every deck. After further testing, people realized that Ghetsis was not as good as originally thought. On average, Ghetsis would usually allow for you to draw 1-3 cards. Most people prefer to simply setting up with a Juniper, N, or Colress, as opposed to the minor draw and disruption that Ghetsis provides. However, I still think that Ghetsis may be a nice “61st” type of card in some decks.

The fact that Ghetsis allows for you to see your opponent’s entire hand is fascinating and highly undervalued. This can allow for you to plan the next couple of turns and arrange your board in a way to prevent KOs and make it difficult for your opponent.

In the late game, when your board is set and you have a sizeable hand, a well-timed Ghetsis can swing a game dramatically, preventing your opponent from getting a KO (shuffle back Catchers, Lasers, Switches, and other crucial cards). Alternatively, a well-timed Catcher on a Garbodor or an Eel with a Ghetsis can stall for several turns.

Granted, this is not a card you attempt to spam every turn, but it’s a highly strategic card that can buy you time or prevent KOs in the mid to late game.

An interesting card that I think may see some play with Team Plasma decks. There is some synergy here. You can discard a Plasma Energy, draw 4, and then use Thundurus EX’s attack to retrieve the Plasma Energy. I haven’t play tested enough with it, but I can see it being a 1-of in a Team Plasma deck.

Good old N. Once upon a time, I would have said that this was definitely a 4-of in every deck because of the lack of other draw Supporters. Now, N has competition with other Supporters such as Colress and Skyla. However, N remains a great Supporter throughout the entire game, usually drawing 6 in the beginning, disrupting your opponent in the middle of games, and winning games from behind at the end of games.

In certain decks, I do not see the need for 4, especially decks that take early leads such as Team Plasma decks. There are certain situations in which I have hated “N’ very much because of the fact that my opponent gets a free hand-refresh at the beginning of games.

I have seen some deviance in deck building and some people such as Ness played with zero in his Blastoise deck at certain points of this season.

“Shuffle your hand into your deck. Then, draw a number of cards equal to the number of Benched Pokémon (both yours and your opponent’s).”

Initially, the reception for Colress was very poor. However, I believe times have changed. When Colress first came out, many decks didn’t really play with a large amount of Pokémon on the bench. Now, we have decks such as Team Plasma, Blastoise, Eels, and Garbador that tend to play with larger benches.

Colress is definitely a card I do not like to see in the beginning because it will usually net 1-3 cards, while having to shuffle your entire hand. In the late game, Colress becomes amazing and can frequently net anywhere from 5-10 cards depending on the deck you play. Having a large hand when you’re closing out a game is devastating against your opponent.

“Search your deck for a Trainer card, reveal it, and put it into your hand. Shuffle your deck afterward.”

This may come off as a “duh!”, but I believe Skyla is one of the best Supporters in the game, netting you the specific card that you may need to get the KO or win the game. In setup decks, Skyla is easily a 4-of stable. It can be used turn 1 to get a Tropical Beach for Blastoise and Klinklang decks. It can be used turn 2 to net the missing Rare Candy or Ultra Ball to get the early setup.

Decks that rely on heavy speed will probably not use Skyla as liberally, but it still has quite a niche in every deck allowing it to be the necessary Switch, Catcher, Laser, Stadium, or even Energy Search to make your deck properly function.

“Put a Team Plasma card from your discard pile into your hand.”

Shadow Triad is a slightly overlooked card in my opinion. It sucks early game and it’s situational, but in longer games it can be the game saver, allowing for you to get anything from a Colress Machine to that Deoxys you may need to KO your opponent.

“Reveal cards from the top of your deck until you reveal a Supporter card. Put it into your hand. Shuffle the other cards back into your deck.”

Although, it’s technically an Item, I feel like writing about Random Receiver. It hasn’t seen much love lately, but it has a niche in Darkrai decks because Sableye can Junk Hunt for it. One of the main uses for this card is when you want to increase the probability of a Juniper in a turbo type deck. Using Random Receiver instead of a card such as Colress or Bianca will net you a T1 Juniper much more frequently at the expense of having mid-late game consistency.

In summary, here are some recommended Supporter Lines.

There are other Supporters that are in the metagame (Hugh, Hooligans Jim & Cas, Cilan), which probably will not see too much play because of their lack of overall utility. Anyway, I hope you enjoyed this article and let me know if you would like any statistical analysis to be done (ideas for another Pokémetrics!) 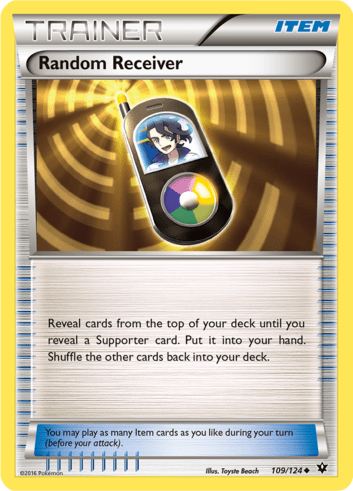