Wassup! Today I will be giving a report on the Battle Road tournament I recently attended as well as an analysis of Garbodor for Nationals.

This is the list I played for the tournament.

This Trubbish may not be as versatile as Trubbish NVI, but it does have 10 more HP which lowers its likelihood of being donked. Its two Energy Retreat Cost is negated by the presence of Float Stone, and Tool Drop is a highly useful attack because it transforms Trubbish from a sitting duck into a decent attacker that only gives up 1 Prize.

Cobalion is your go to attacker for Plasma Basics and is also very good against the main attackers of Big Basics decks such as Tornadus EX and Mewtwo EX, both of which rely heavily on Double Colorless Energy.

Landorus is very good against Darkrai and Eels and is a solid attacker in general.

I went with 2 Mewtwo because one is simply not enough. A single copy would either end up being prized or I would need a second one for Mewtwo wars.

Tornadus gives me another option to donk with Blow Through. He also provides this deck with a soft Landorus counter and a powerful attack that does not require a specific type of Energy.

The fourth Float Stone was an addition to the deck I made the night before the tournament. It is necessary because it acts as an extra Switch and is another Tool for Garbodor.

Eviolite is great in this deck because it activates Garbotoxin and can give your attackers some defense, stretching out 2HKOs into 3HKOs.

Heavy Ball is great in this deck because it gives me the flexibility to search for Garbodor and Landorus without having to discard any cards.

I played Computer Search over Dowsing Machine for two reasons. The first is so that I can search for Special Energy if I needed to. The second reason is that I can use it to search for draw Supporters, which helps this deck get going early on.

Prism Energy is very good in this deck because it fulfills the Energy requirements of both Landorus and Cobalion. It also gives me the ability to use Psydrive with Mewtwo and Tool Drop with Trubbish.

I was originally running a 2/2 split of Metal and F Energy. I went with the Blend Energy to maximize my chances of getting a T1 Landorus going while still keeping the M Energy for Cobalion-EX. I kept the F Energy so I could keep a Landorus-EX going against the likes of Darkrai if Enhanced Hammer came into play.

I got there early and traded around for the last Float Stone I needed for my deck and did some other trading as well. I also frantically filled out the decklist for one of the new players participating at the tournament. Finally the tournament began. We had 1 Junior, 6 Seniors, and a whopping 17 Masters. Masters had five rounds of Swiss.

Thankfully, I opened off with a Landorus-EX to his Regigigas-EX. I dropped a Prism Energy and started whacking away with Hammerhead. He then dropped a Rock Guard on the Regigas and eventually got a Serperior set up with a Tornadus EX on the bench. I also had a Garbodor set up on the bench at that point. I simply pounded away at his bench with Hammerhead for the win.

I saw my second round pairings and my hopes sank significantly. Niko is currently around 50 Points away from Worlds and one of the best players in the state. Anyway, I start the game off by mulliganing twice and then opening a Trubbish to his Mewtwo. Thankfully, I go first. I get a Cobalion-EX set up on T1 and start laying into his Mewtwo.

We trade Prizes until we get to two apiece. I have a Cobalion-EX with a Blend WFLM attached active and an Eviolite attached and a Mewtwo benched with a DCE attached with a Computer Search and a Colress in hand. He has a Mewtwo active with a P Energy attached. I Computer Search for a DCE and Colress for a four but cannot get the Float Stone I need to win the game!

He then Junipers, attaches a P Energy to his Mewtwo, and Catchers my Mewtwo for the win.

Round 3 vs. Jesse with Big Basics

I opened Trubbish again to his Landorus. I was able to take 2 Prizes but could not accumulate any significant amount of Hypnotoxic Laser damage because he had a Keldeo with a Float Stone attached for most of the game. He managed to get heads on both of the Super Scoop Ups he played, removing around 100-140 damage with each of them. He was also able to Max Potion away 150 damage off of a Mewtwo. In short, I lost.

After the third round, we broke for lunch and came back. Some people were not in their seats at 2:30 PM, so they would be handed an auto-loss if the game went to time and was not decided after the third turn. If both were late, it would be a double-loss.

Round 4 vs. Courtney Gonzales with RayEels

I opened Landorus to her two Tynamos and started Hammerheading away. I got down to 1 Prize and then she made her comeback. She tied it up at 1-1 and then I Knocked Out an Eelektrik with a Hammerhead + Hypnotoxic Laser for the win.

In case you don’t know how this deck works, Mamoswine’s Continuous Headbutt attack allows you to flip a coin until you get tails. It then does 90 damage for each heads. Victini allows you to start over if you fail to get a heads.

Anyway, I opened off with a Mewtwo to her Ducklett. I attached a DCE, played a Hypnotoxic Laser, and X Balled for 50 with poison. She was unable to get another Basic in play and passed, with her Ducklett getting Knocked Out by poison damage.

I took 9th place, which somewhat disappointed me as I knew I could’ve done better and also because this was the last tournament I would be attending this season. However, I was able to win a sweet Pokémon backpack in the raffle.

Why Garbodor Can Succeed at Nationals

Garbodor is, in my opinion, a strong deck choice for Nationals. There are multiple reasons why Garbodor can succeed at Nationals.

1. It auto-wins against non-Tool Scrapper RayEels, Gothitelle/Accelgor, and Blastoise builds.

Garbodor blows through these decks if they don’t have Tool Scrapper. Even if they do, they’re still highly winnable matchups.

Both Big Basics and Plasma Basics usually run heavy counts of Special Energy, making them ripe for disruption from Cobalion-EX. Steel Bullet also allows you to 1HKO Sigilyph DRX and Bouffalant DEX, two of the most popular non-EX attackers in Big Basics.

3. Landorus allows you to run through Darkrai.

If you are able to open off with a Landorus and a F Energy, solid Catcher play and a few Hypnotoxic Lasers will result in 3-4 quick Prizes by sniping and trading off who you’re attacking. It is also important to go after Absols, which are dangerous attackers against Garbodor because of the tendency that the deck has to play with a larger bench. While two Landorus-EX are not enough to beat Darkrai all by themselves, they will give you the ability to grab a lead early on in the game.

Garbodor is, in my opinion, is the best Tier 2 deck right now. Depending on the build, it can essentially be a Big Basics deck that shuts off Abilities, thus greatly improving its matchup against Blastoise and RayEels.

It even disrupts Darkrai and Plasma Basics, the former relying on Keldeo-EX’s Rush In Ability to remove the effects of Hypnotoxic Laser. Plasma Basics relies greatly on Deoxys-EX’s Power Connect to increase its damage output and Lugia EX to take extra Prizes. Neither of these decks appreciates having those benefits taken away from them.

Well, that’s all for now. Thanks for reading! 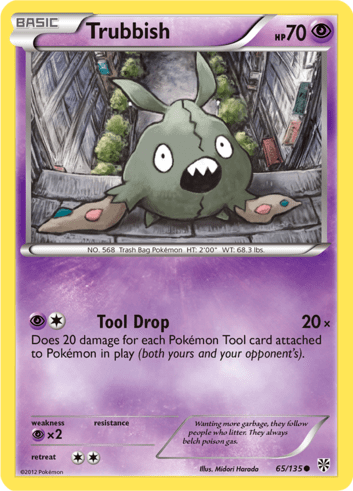