Hello everyone! My name is Matt, but you can call me “weakest.” I’m not much for introductions, but I thought I’d share a little about myself. I am a Masters player from the northeastern Ohio area going into my second season of competitive play.

I ended my first season with 24 CP and my greatest achievement was a second place finish at a Battle Roads in the fall with Terrakion/Garbodor. While they aren’t the most exciting credentials, I am very proud with how my first season turned out especially because I am still in high school and didn’t play too seriously for most of the season.

Now with the formalities out of the way, it is time to discuss the topic at hand: the upcoming format.

Editor’s Note: This article was written before Worlds.

TDK obviously dominated the format since its inception, winning numerous Battle Roads in the US and doing well in most National tournaments as well. It was strong, fast, and could even survive in the late game thanks to Thundurus EX. However, it thrived early game and put pressure on everything it was put against.

Blastoise is another deck that was great since it came out and has been able to pick up a few new tricks along the way such as Superior Energy Retrieval and Black Kyurem EX. Even though it was easy to donk a Squirtle with TDK, Blastoise could make roaring comebacks in the late game.

Gothitelle is obviously very good when it sets up (good enough to win US Nats at least) and can beat even its worst match ups when put into the hands of a good player. However, if the lock breaks it can be devastating for the deck, which leads me to place it more toward tier 1.5.

These decks could be destructive when put into the correct hands, and they have earned a slot into my personal tier 1. Decks such as Darkrai and Garbodor are good as well, but fail to keep up with the speed and power of the decks in tier 1.

But what about these decks now? How do they fare with the shifting format and the newly released (at least in prerelease form) set, Plasma Blast? Well, we lost a lot more stuff than we may think.

Klinklang BLW and Cobalion NVI are both gone, severely crippling Klinklang at its core since it relied on slow set up and prize denial via Max Potion. Cobalion NVI kept Kyurem PLF in check and gave the deck a good match up against it.

Gothitelle was completely removed from the format, eliminating it from the metagame for now.

RayEels is gone with the removal of Eelektrik.

Darkrai lost one of its major assets in the form of Energy Switch.

In fact, the only deck to see the least crippling effects of the rotation was TDK which lost virtually nothing. However, the release of Plasma Blast has given the metagame a whole new deck in the form of Genesect/Virizion. Virizion-EX’s ability stops special conditions. Most notably it stops Hypnotoxic Laser, one of the driving forces behind TDK. That should hurt TDK too right?

From Plasma Blast we also gain Silver Bangle, which gives TDK another powerful (albeit less powerful than LaserBank because Bangle only applies to EXs) tool for it to use to utterly destroy the competition. It became easier for Kyurem to take 2 Prizes T2 because you need half the cards to pull off T2 170-180 (Laser + Virbank as opposed to just Silver Bangle).

In addition to Silver Bangle, a tool called Silver Mirror was introduced, which is a great anti-Plasma card. That being said, it is not the greatest weapon against Plasma as many Plasma players can easily switch out their Lasers and Virbanks for Bangles and Tool Scrappers. This makes even Silver Bangle problematic because you are limited to 4 copies and they can be Scrappered away easily. I do think that Silver Mirror is still a very good card and will see play.

Back to Genesect for a minute. Genesect EX has an underwhelming attack for a bad attack cost that, while can be achieved T2, is difficult to get every time even with Colress Machine or using Virizion-EX’s Emerald Slash attack. Where Genesect can shine is in the form of the AceSpec G-Booster that allows it to hit for 200 damage for the same energy cost in exchange for discarding two energy attached to it. It’s like Black Kyurem EX, only with a lower cost. Sounds great right?

But in practice it is difficult to get T2 Genesect and G-Booster. Even if you do hit the jackpot and get it all going, Gensect can easily be 1HKO’d by Kyurem or the G-Booster can be easily Scrappered away because Tool Scrapper is going to be seeing a massive rise in play (or at least it should with all these great tools in format). While G-Booster is interesting and Virizion-EX’s ability is good, Gensect is tool slow to keep up with the likes of TDK.

Enough of what gets bad. What gets good? Good question! The answer to that is to look at old decks and see what they gain. Darkrai/Hydreigon, for example, gets better because of Virizion-EX blocking laser. Making it easier for whatever is on the field to stay alive thanks to Max Potion and Blend GRPD (as well as Hydreigon). I feel like this deck will become the Klinklang of the coming format as it behaves very similarly.

Another deck that may see some play is Terrakion BCR/Suicune PLB/Silver Mirror. This deck relies on keeping the opponent from hurting any of your Pokémon while Slowly killing them off with Terrakion NVI and Suicune PLB. This deck is decent because of its good attackers and good Prize exchange, but is nowhere near tier 1.

As for Blastoise, it gains and loses almost nothing. Suicune PLB could be an interesting tech, and a heavier Black Kyurem EX line may need to be introduced due to Keldeo’s grass weakness, but overall it remains good and may have a better TDK match up. I say this because without Lasers, it is harder to donk a Squirtle and it keeps Thundurus EX and Deoxys-EX from hitting the numbers they need to to Knock Out Keldeo, Squirtle, and Black Kyurem.

The final deck I wish to mention before I give my predictions for the tiers of the coming format is RayBoar. Now I’m not saying this deck is good (because it isn’t), but it may have a sliver of a chance because of the possible rise in play of Genesect during battle roads and the fact that Emboar can utilize Reshiram. That being said Tepigs can be sniped, are weak to water, and Kyurem exists (sadly) so RayBoar may be a one-time wonder.

And now it is time for the reveal of my predictions for the upcoming Battle Road format. Keep in mind that these are opinions and I will do my best to explain my reasoning for at least tier 1.

TDK is still TDK and will be good for a long time.

Gensect will be very popular for a while, allowing it to win more because more people will play it. However, I personally don’t think that the deck is good at all and would put it in tier 2 if I put my bias into it.

Blastoise doesn’t lose much and doesn’t gain much, but it really didn’t need anything. The deck is good and will stay good for at least this format.

Even though I believe their will be a rise in Tool Scrapper as the format progresses, I maintain that Garbodor will remain Tier 2. This is due to Silver Mirror being a viable tool to attach to Garbodor in addition to other great tools such as Float Stone and Rescue Scarf. Silver Mirror can also be used on non-ex attackers in the deck such as Sableye, Terrakion, or even Absol.

While the consistency of the deck may fall a little bit by an increase of tools in the deck, the lock will also be able to be maintained much longer. Consistency can also be maintained by an increase in search cards of the use of stadiums like Tropical Beach. However, since the deck can be donked (Deoxys is still a threat) and the lock can be broken by a single card, I expect Garbodor variants to remain tier 2.

Thank you all for reading! I’d appreciate any feedback and hope you all have a wonderful day.

P.S. Thanks to my friend Jacob for the title! 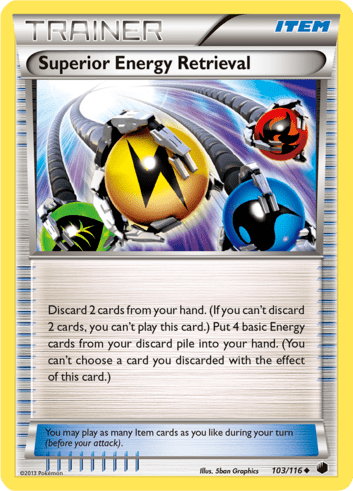