Salutations! Today I am going to be focusing on one of the most intriguing cards to come out of Plasma Blast: Tropius! Tropius is currently, in my opinion, the most controversial card to come out of Plasma Blast. I intend to give you a full rundown on the capabilities of the card, the decks it can function well in, how it functions in those decks, and my opinion on whether Tropius is a card worth considering for certain decks.

Capabilities: How the Numbers Stack Up

Tropius has a solid 100 HP, which unfortunately prevents him from being searchable by Level Ball. It has a weakness to Lightning and a resistance to Fighting, making it a decent counter to Landorus-EX. This also gives Virizion/Genesect an attacker who is not weak to Fire. It has a one-Energy Retreat Cost, which allows it to have free retreat when Skyarrow Bridge is in play.

Its first attack, Return, costs one G Energy and does 10 damage while allowing you to draw cards until you have six cards in your hand. This is an excellent first turn attack in many decks.

Its second attack, Energy Press, costs GC and does 20 damage plus an additional 20 damage for every Energy attached to the Defending Pokémon. This allows you to 2HKO Pokémon-EX that have attacks that cost three or more Energy, and to 1HKO a charged up Keldeo-EX. Silver Bangle adds to Tropius’ power by allowing you to do 40 damage on your first turn with Return and allowing you to 2HKO Pokémon-EX that have two Energy attached to them.

Decks It Can Function In: Where and How to Use Tropius

The most obvious use of the card is in the new deck coming out in the latest set, Plasma Blast. That deck, of course, is Virizion/Genesect. Tropius’ Return attack provides a great secondary option if you whiff the T1 Emerald Slash with Virizion because it replenishes your hand and does a little bit of damage. That 10 damage can be huge down the road against decks that rely on 170 HP EXs because it allows you to hit numbers with Megalo Cannon main damage and snipe damage as well as Megalo Cannon snipe damage and Gold Breaker damage if you choose to run Bouffalant DRX.

Tropius also provides a decent secondary attack with Energy Press against decks that run Mewtwo or other attackers who tend to stack Energy on one Pokémon.

The second deck where Tropius can make an impact is Darkrai/Hydreigon. He can provide draw support early on thanks to cards like Blend GRPD Energy and Prism Energy allowing the deck to fulfill the G Energy requirement while still retaining the D Energy element. Energy Press is also a decent attack in the deck, allowing the deck to take down Mewtwos and other highly energized attackers. Tropius is a great addition to this deck because it provides a second non-EX attacker besides Absol. Tropius is also a great card in any deck that makes use of Prism Energy or Blend GRPD Energy.

Tropius is a going to be a good card in the upcoming format. It is a better counter to Keldeo-EX than Mewtwo EX is and also provides excellent draw support while doing damage, making it a solid T1 option. He is a great non-EX attacker and can fill the niche in many decks that is left by the rotation of Cobalion NVI. Return is a great attack for decks that require speed and need multiple cards in order to set up, such as Blastoise and Darkrai/Hydreigon. 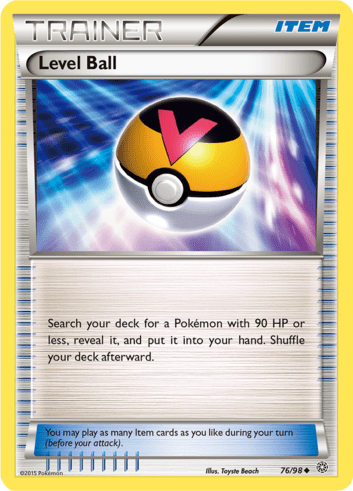