Hello beautiful people and welcome to another article by me. The new season starts soon and after about a month of testing I’ve got a lot to say. I feel like the entire NXD–PLB format boils down to one decision, which is what I will be discussing today. In the end it’s all about whether you want to dance like a Butterfree or sting like a Beedrill, or told in less ambiguous terms, whether to counter or not.

The Theory of Counters

When I think about a “counter,” it’s usually one or more cards that gives you a good, or at least better, matchup against other decks or specific cards in the format. Teching these cards into your deck will result in one or more matchups becoming easier to play against. It’s madness to enter a tournament with poor matchups against popular plays, so playing a counter might not be a bad idea.

It’s important to note that a deck based around counters is different from a lock deck. Lock decks, like The Truth, Garbodor, or Gothilock, counter Items, Abilities, and even attacks. Altering the rules of the game in your favor by hindering your opponent is termed “locking,” while directly protecting yourself from one or two cards is countering. Because of this, I won’t mention Garbodor since it creates a lock, and doesn’t counter one.

While different counter cards come with certain perks, most of them also come with disadvantages:

If you decide to add in tech cards, then other cards need to exit your list. Do you need to drop an Energy? A search card? Perhaps a Supporter? The point is that whatever you drop could be something very useful in future matches so caution is necessary.

An example of this would be the Darkrai EX/Mewtwo EX/Terrakion NVI decks from the 2012 Worlds format. They played so many weird Energies and Pokémon that quite often the deck just tanked and was heavily reliant on Smeargle UD. Terrakion and Mewtwo could give it wonderful comeback potential though.

Whatever tech you play, it will probably only be good in one matchup. Most formats consist of four or more possible decks, so countering one might not be enough. If you meet a matchup where the tech is not usable, then you are essentially playing with 59 cards. Whatever card you dropped for the tech is probably more useful, and this switch might even lose you games.

An example of this is Keldeo-EX in most Worlds 2013 decks. Even though it was great against Gothilock, and pretty powerful combined with Kyurem PLF, it was never useful against anything else. Against Blastoise, it just gave them more cannon fodder and Darkrai EX got more easy targets.

How much is the deck you wish to counter played? This is important since playing with 59 cards for an entire tournament is pretty bad. Whatever you tech against should be popular in the area in which you play, and if it isn’t popular, perhaps it’s worth not teching – just hope you don’t meet your bad matchup.

An example of this would be most RayEels decks since the release of Klinklang PLS. Ever since then, RayEels usually played Victini NVI 15, since it gave them an auto-win. It was only really helpful in that one matchup though, and there were never enough Klinklang, at least in Norway, to justify playing it.

The first format of the 2013-2014 format is a great one, and perhaps my favorite since I came back to the game two years ago. It manages to fix the issues I had with Plasma Freeze and Plasma Storm by introducing a lot of great cards which can be played in more or less any deck.

Silver Bangle, Silver Mirror, and Drifblim PLB are good examples of such cards. They allow many new decks to pop up and old decks to grow stronger. This makes the format both much more fun to play and way harder to predict.

A big part of the reason why this format is so good lies in the counters. It’s similar to the BLW–BCR format, where most decks could choose to be speedy but often you didn’t want to. Taking an extra turn to Junk Hunt or get a second Blastoise into play would probably be better rather than attacking right away. Sudden Terrakions or Mewtwo EXs could put dents in your strategy, similar to what Enhanced hammer and Silver Mirror can do to other decks in this format.

With all the different counter cards present in Plasma Blast, many decks will be forced to move slower.

The Counters in Question

There are in my opinion three main types of counters we see in this format. In this section, I will talk about them and their place in the metagame.

Special Energies are bountiful in the Plasma Blast format. The different Plasma variants play mostly these types of Energies because of their wide variety of attackers. Still, decks like Hydreigon, Big Basics, Genesect, and many others play at least four copies of Special Energies too. The only current tier 1 decks that do not utilize them are Darkrai and Blastoise.

Enhanced Hammer is perhaps the best counter to Special Energies. It can be played in anything and is a single use card, meaning it fits any kind of situation as long as a Special Energy is involved. It combines well with Drifblim DRX which can do 50 damage for every Special Energy in your opponent’s discard pile for a single C Energy.

These are the two main counters I think about for Special Energies. They are devastating and easy to utilize. Only decks with little space – mostly Stage 2 decks – have difficulty incorporating them.

Do I really need to say how good EXs are? I can’t think of many decks without these cards because of how powerful they are. While giving up 2 Prizes is painful, the power that they bring is well worth the price.

Anti-EX cards have been around for a while, but they haven’t been overly popular until now. Sigilyph DRX had a mediocre attack, poor typing, and bad HP. The new Suicune is the same card except better in every way. Bouffalant, also from Dragons Exalted, is still relevant because of Silver Bangle. This nifty Tool allows many inherently weaker Pokémon the chance to duke it out with EXs while only yielding 1 Prize.

These cards are difficult to utilize though since Suicune needs W Energies, Bouffalant needs a lot of Energy, and Silver Bangle can only be played on non-Pokémon-EX.

Is it weird that Plasma Pokémon are still playable after Worlds? Not really, since the original TDK didn’t lose any cards and we were introduced to a new great Plasma wonder in the form of Genesect EX. The Plasma variants are essentially extremely fast setup decks, and something with both speed and the ability to set up is naturally good.

Direct Plasma counters come mostly in the form of Silver Mirror. While the new Drifblim from Plasma Blast also hates on Plasma, with its mere 100 HP and Plasma’s ability to spread their Energies around, I feel like Enhanced Hammers and Drifblim DRX are also necessary to make it functional.

Silver Mirror forces all Plasma decks to play at least two Tool Scrappers and to utilize their resources carefully. I have run into many instances in my testing where Plasma has had only 1 Prize left, but no Scrappers remaining and the opposing deck won the match with its single Suicune and Silver Mirror.

On the Other Hand…

While counters may pose a great threat, there is still great value in playing the top tier decks. I feel like it’s important to discuss exactly how much of an impact these counters actually have.

While Enhanced Hammer and Drifblim DRX are horrifying sights for Special Energy users, they are not necessarily game changers. It is perfectly possible for a deck with only four Special Energies to play around both cards, making large parts of their opponents’ decks useless.

The surprise factor might be enough though, and I strongly urge players to be cautious playing their Plasma, Big Basics, and Hydreigon deck in future tournaments.

Most EX decks can easily play non-EX attackers. Kyurem PLF, Absol PLF, Hydreigon DRX 97, Blastoise BCR, and many others do an adequate job attacking. Suicune, Bouffalant, and Bangle then quickly become risky plays, since you are not guaranteed the win even if your opponent flips over a Darkrai EX or Thundurus EX.

I feel like this is the deck which has been targeted the most. Special Energy, EX, and Plasma counters work wonders against it, but those cards still never mean an auto-loss. By playing your resources correctly almost any matchup is beatable. The only “impossible” matchup for Plasma is the heavy combination of Enhanced Hammer and Drifblim DRX. They do way too much damage and restrict your set up to an incredible degree.

Now that I have established that both counter decks and naturally strong decks are playable, it’s important to discuss whether the risk to counter is worth taking. Playing Suicune PLB/Terrakion BCR/Silver Mirror, which did win a large tournament in Japan, means you counter EX and Plasma decks, but what happens if you meet Blastoise? It only needs four W Energies to 1HKO a Suicune, meaning Mewtwo EX isn’t a good option, and Keldeo-EX can finish the Terrakions.

Because of this, I highly recommend creating a list of all the metagame decks you expect to see and then deciding if your deck is worth playing. Remember that the variable in this equation is the degree to which each deck is played. If Blastoise sees little play then you might be able to take a tournament with Suicune/Terrakion/Silver Mirror.

In the end I feel like this is an amazing format. While there are counters for all of the major decks you might meet, nothing is set in stone and any matchup can be beat. By utilizing experience and caution, no game is impossible. It’s up to you how many risks to take and research is important now that there are so many decks going around. Variation is the spice of life – something Plasma Blast brings in spades.

I hope to see a lot of fun decks make top cut in the upcoming season. I am glad to report that the Pokémon TCG is on the track to victory.

I hope you enjoyed reading this article! 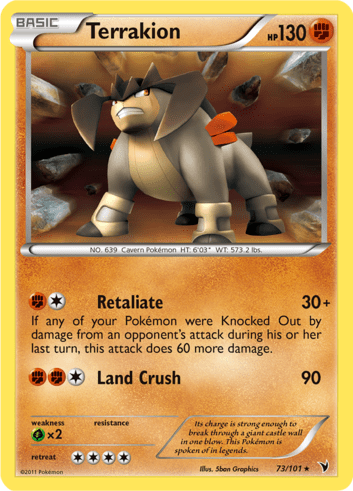