Hello again SixPrizes, it’s been a while since my last article. Since then, we’ve had Worlds and our annual rotation, which didn’t really have much effect, aside from destroying my favorite deck, RayEels. I’m back again with another Card Commentary, this time on Jirachi-EX from the most recent set Plasma Blast.

At first glance, Jirachi-EX has very disappointing stats. The bottom part of the card is probably the nicest bit: a Weakness to Fire isn’t very relevant, as the only Fire type to see even a bit of play, Victini-EX, 1HKOs you anyway. A Psychic Resistance is nice but again fairly irrelevant. Having a Retreat Cost of only a single Energy is fairly nice.

Looking at the top, a Metal typing can hit Kyurem for Weakness, but you shouldn’t really think about using Hypnostrike attack anyway.

90 HP is abysmal on a Pokémon-EX, but it does allow for one small niche: you can use Level Ball to search for Jirachi-EX with no drawbacks at all. 90 Hit Points allows for Night Spear, Blizzard Burn, and many others to 1HKO Jirachi-EX. Kyurem can even KO Jirachi with a very lucky Frost Spear (involving Bangle and multiple Deoxys).

Its only attack does a relatively expensive 60 for a Metal and two C Energy, putting both Jirachi-EX and the Defending Pokémon Asleep. It does have some amazing synergy with Virizion-EX and Prism though… Yeah, it’s a terrible attack.

However, Jirachi-EX’s Ability is where it really shines. Stellar Guidance allows you to search your deck for a Supporter of your choice when you play it down from your hand. In a deck with multiple search cards, this can increase your outs to Supporters by a huge amount, helping you escape some nasty dead-drawing or grabbing that game winning Skyla.

As the Ability does only activate when you play it down, it does combo quite well with Scoop Up Cyclone allowing multiple uses and as a means of getting Jirachi-EX out of harms way, but with competition from other, more multi-purpose ACE SPECs, it’s hard to justify using it.

There’s one part of the Ability I feel is often overlooked, and that is the fact it isn’t an out to a Supporter: it’s an out to any Supporter. While a Random Receiver may give you another out to a Supporter, you’re at the mercy of luck to what Supporter that is. However, Jirachi-EX lets you take each situation and then decide on the best Supporter for that moment.

Need a Skyla for that Catcher you need? A Juniper to end a Supporter drought? A Cilan to grab 3 Energy to Deluge? It opens up a lot of possibilities and is why this Ability really shines.

Stellar Guidance opens up the options for several 1-of Supporters. For example, in decks with a fairly small Bench running multiple Colress isn’t always ideal. Using Jirachi can mean a 1-of Supporter is more justifiable. Overall I feel the best use of this is running a 1-of Cilan in Blastoise; a very powerful but ultimately situational supporter. Running Jirachi can give you another 4-6 outs (depending on the ball count) to Cilan which makes that situational Supporter more likely to be in your hand when you need it.

However, you can’t deny this isn’t a card for every deck. Some decks just don’t run enough search for it to be worthwhile: some Plasma builds, for example, run as little as 2 or 3 Ultra Ball, where only having an extra 2-3 outs to a Supporter just isn’t worth it.

Some decks, such as non-Drifblim based Genesect decks are often running only 7 or 8 other Basics, which makes starting with Jirachi-EX not that rare. Starting with this card is horrible.

Firstly, its Ability is totally useless because of this, so you’ve actually lose your extra outs to your supporter just from starting with it. It’s also incredibly frail and chances are it’s going to end up as an easy 2 Prizes for your opponent at some point in the game.

One deck I feel can really benefit from this card is Zebstrika-based decks. Even when paired with Garbodor, it offers around 7-8 extra outs to Supporters in this deck, which is really useful in a deck where the first few turns are so crucial. Additionally Zebstrika blocks Catcher, meaning Jirachi isn’t as much of a liability in this deck than in others.

The other, higher tier, deck that really likes this card is Blastoise. Blastoise is naturally inconsistent because it has to set up Stage 2s as well as hitting all the Energy and Item cards to continue attacking. Missing a supporter or having to use the wrong one in this deck often spells disaster for it. The help Jirachi brings is definitely felt in this deck due to the higher ball counts in this deck giving you generally at least 5 outs to it.

Jirachi-EX also combos well with a 1-of Cilan in this deck, helping you grab Energy when there’s not enough in the discard or when there are just no Superior Energy Retrievals left. Additionally, Jirachi’s often going to be ignored most games, because there’s always a bigger threat to kill: a Catcher used on a Jirachi-EX isn’t KOing a Blastoise or finishing off a Black Kyurem EX.

Some builds of this deck use the ACE SPEC Scoop Up Cyclone which combos well with Jirachi-EX, but I wouldn’t recommend it due to this deck needing the consistency other ACE SPECs such as Computer Search bring. Running this in a Blastoise deck with Exeggcute PLF is something I’d not advise at all, as both are very poor starts.

Overall, I feel Jirachi-EX is a card that adds something new and cool to the format in the way of Basic Pokémon consistency. The Ability is undeniably very powerful but not for every deck, and is something to test before you take to a tournament. It’s definitely not something you should write off, and is certainly a card worth testing.

Side Note: I’ve considered making these somewhat regular (once a fortnight?), and I’d like some feedback/thoughts. 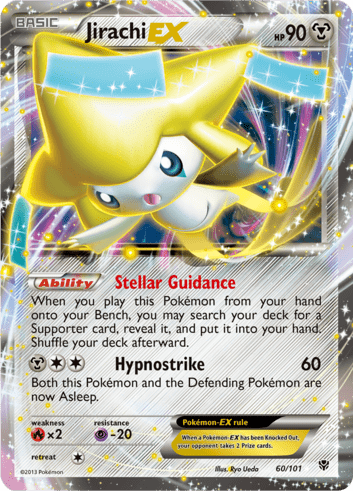