Hey everybody, it’s ninjapikachu back again after a long break. Today I’d like to cover my run at the Manchester Regional Championship, where I finally managed to Top 2 an event above the Cities level, after three failed attempts.

Also, let me give special mention and thanks to my friend Adam (and his mum) who helped me test, let me travel down from Edinburgh and stay with them, and piloted the deck we’d developed and tested to a 3rd place finish. Well done!

I’m afraid I can’t share the decklist I used, as I’ll in all likelihood use it again next weekend in Glasgow, but I think it’s safe to say I played Genesect/Virizion/Drifblim, for a variety of reasons which I’ll take a moment to outline.

Now, I’m lucky to have the ability to build almost any deck in the format at any given time, so what I would run was mainly determined by how much I’d tested with each deck in question, alongside my belief in its viability in the format.

Blastoise I might have considered, but I had barely tested it since before Nationals, and didn’t know if I could create and practice with a competitive list in time. Also, my Black Kyurem EX and other assorted components I’d agreed to loan to a friend, meaning it would be extremely hard to build the deck in this case. Had things been slightly different, it would definitely have been my second best option.

Plasma I strongly considered, as it’s both powerful and consistent, but I deemed it too vulnerable to being countered, and with an unreliable mirror match, I thought the risk of playing it was simply too large to take.

Darkrai was out of the question, as it was also largely untested, and following my last run at Regionals, I had vowed wholeheartedly to never touch it with a barge pole. Ever.

Other options like Flareon/Driflblim and Victini-EX/Terrakion-EX/Drifblim I had never built, and I had no clue how to make a decent list for them. With little time, and a horrible feeling about the Keldeo matchup, the idea was scrapped, which brought me to Genesect/Virizion.

I, like a great many other people, had jumped on the hype train as soon as the cards were revealed, and had traded for the entire deck by a few weeks after their release. But in testing, the standard Plasma Badge variant had soon proved itself to not be all it was cracked up to be, and I had serious doubts about ever using it in tournaments.

Fortunately, a Facebook conversation about the deck with Oliver Barnett informed me of the existence of a new variant: Genesect/Virizion/Drifblim. I made a couple of small modifications to the list he’d given me, started testing, and realised I’d found my tournament deck of choice.

It was great in the Plasma matchup, with both varieties of Drifblim giving me a type advantage on Deoxys, a way of removing Energy from the opponent,and a positive Prize exchange, all for a maximum of 1 Energy. They also gave me the advantage in the mirror, and against really any deck utilising Special Energy.

Its Blastoise matchup was more or less as good as anything’s can be, around 50/50, leaving the only deck I needed to worry about the relatively non-mainstream Flareon. So that’s how it happened.

Now without further ado, let me move on to my tournament report. If I make any mistakes about what happened or how many games we had in a round, or something like that, please feel free to correct me in the comments.

Round 1 vs. Demetri w/ Darkrai/Garbodor

I was really nervous going into the first round, with this being my first tournament of the year, and of course my first with the new rules. I don’t remember exactly what happened, but my setup didn’t go as well as it could have, and before long Demetri was streaming Darkrai EX and hurling Night Spear after Night Spear at me.

Games 1 and 2 both went pretty much the same way, with me on the losing side.

I made sure to stop and focus myself after this, really not wanting my mindset to fall into the post-loss downward spiral that happens all too often with me.

I didn’t see a single Thundurus EX of his throughout our games, as both times he opened with Kyurem PLF and started powering it up as soon as he could. Woohoo, the matchup above all others that I had hoped for! I pretty much just let the Drifblims do their job for this one.

Round 3 vs. Rhys w/ Genesect/Virizion

We’d been sat beside each other for the previous round, so we knew what each other was playing. I set up pretty well, though I can’t for the life of me remember whether it was Genesect or Virizion that I got set up first, or where anything came in really.

A moment that particularly stood out over this round was a shining example of what I’d been doing all day: judge calling. I was Catchering for a Virizion to KO it and either win or be in a position where I had the game. I roll a dice. Heads; fair enough. Then this conversation ensued:

“Well that one just flipped heads too, so it’s fine,” I said.

“But you’re the one meant to roll it.”

“Well I did roll it, and I got heads, and you saw me pick up the dice, and you could’ve stopped me and made me use another, but you didn’t. And then you roll again with a translucent one anyway, and it too is heads, and now you’re trying to get me to roll again after all these heads. The odds are against me by 75% that I’ll get another heads when I’ve had two previous results that are heads.”

Editor’s Note: This is what is known as “gambler’s fallacy.” Please understand that the odds of rolling heads do NOT go down if the previous roll was heads. There is still a 50% chance.

The conversation is repeated to the judge, who agrees that I did indeed get heads. As I now in all probability have game, and possibly out of sheer frustration, he scoops.

Editor’s Note: I would have scooped in frustration over the bad ruling as well. There should have been a re-roll.

Round 4 vs. Zoe w/ Blastoise/Keldeo

I wasn’t amazingly confident about my Blastoise matchup, and I knew that one more loss would probably knock me out of cut, so I was desperately hoping for good setups.

Game 1 I get the upper hand, and then a few turns in she plays Skyla and Colress on the same turn, putting herself into an irreversible game state which results in a loss.

In Game 2 Weakness plays an important role, and she has more than a few issues getting a Blastoise out, resulting in a victory for me. Thank you Megalo Cannon!

Round 5 vs. Jordan w/ Virizion/Genesect/Mewtwo

Game 1 I’m more or less getting thrashed until my Drifblims spot a DCE and Plasma Energy filled discard, and I manage to Shadow Steal victory from the jaws of defeat.

Game 2 he’d learned his lesson, and I was fairly unremarkably defeated.

Game 3 it was extremely close, and I’d have won had the time been called one turn later. He managed to promote a Mr. Mime with my Drifblim DRX ready to 1HKO his Mewtwo, forcing me to KO that instead on my last turn when I had 2 Prizes remaining. By all rights I had game, but it ended up a tie.

There are a few people with a similar record to me, and the term “stressed out” cannot do justice for me at that point, but after a while of tensely waiting, and barely being able to get the words out as I tell my teammates what’s happened, I find myself in cut at 6th seed.

Yes!! I’ve finally made top cut at a premier rated tournament! And my first match will be on live stream at the front of the shop against Demetri, my only loss of the day.

Game 1, I do as Oliver advised and Emerald Slashed turn 2 on Sableye, charging Genesect. I set up well, a little better than him, and I take the game.

Game 2, I have to go for the turn 2 Genesect instead, but I wind up victorious anyway, with G-booster being involved.

Uh oh, my teammate and testing partner for the weekend. We agree that we won’t call the judges for anything game-defining, as a matter of pure decency to each other, and the games begin.

To be honest, I was feeling fairly confident going in, as I knew from testing that my deck had the advantage. But I also knew that every game we’d played had been really close, and that he knew my deck almost as well as I knew his.

In Game 1, he gets an epic early game Land’s Judgement for KO, I think even on his second turn on my Genesect EX. It goes downhill for me to the tune of my 6 Prizes to his 2, though I’m dealing a fair bit of damage along the way. However, my Drifblim barrage then begins against his field, which is by now running out of steam a little. Add the fact that it’s our 12th hour at the venue, and so Adam is understandably tired and making mistakes, and I’m able to quickly equalise and win.

Game 2 I can’t remember all that from, it’s all morphed into a bit of a blur by this point. I think Derail keeps him from setting up too well, and after he has Energy in the discard Shadow Steal for Weakness on Deoxys gets me the rest of my Prizes.

My deck works near perfectly both games, which more or less went exactly the same way. I get a T2 Emerald Slash on a Keldeo, after failing to Catcher one of two Squirtles, and power up Genesect. He gets T2 Blastoise and Black Ballistas Virizion.

I Red Signal or Catcher to KO Blastoise. He gets a second Blastoise that turn and unfailingly gets the Superior Energy Retrieval to repeat the Black Ballista. I manage at some point to power up a Genesect and G Booster KO the Black Kyurem, and he gets the SER for game.

I’ve never before had a series where it felt like no matter what I did, my efforts all for naught. Well done Yasin, congrats on your first tournament win!

All in all, it was a brilliant weekend, but some particularly good points include:

Thanks for reading, and I hope you’ve enjoyed this report. 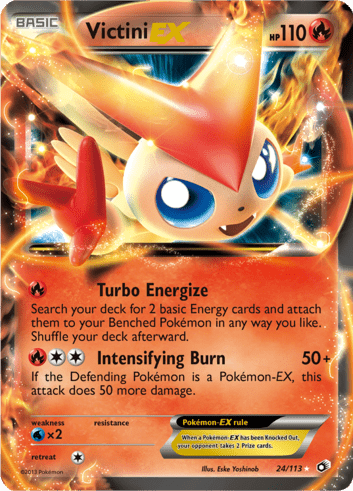