Even though it’s a week after the event, I had a pretty amazing time at Glasgow Regionals, so I think it’s time for another report! After Worlds, I aged up into Masters, and after about 4 months of waiting, Manchester Regionals was finally sanctioned. I’d been messing around with about every deck under the sun, but mainly Genesect/Virizion for the first few months.

After going to Manchester League two weeks before the Regional and playtesting against Duncan Sugrue piloting Empoleon/Dusknoir, I saw just how powerful it was in the new format.

After testing the deck for an entire week, I took Empoleon/Dusknoir to the Wakefield “Win-A-Box” tournament the week before Manchester Regionals. After going 3-0-0 then losing to Johnny Hall’s Darkrai/Garbodor and a Blastoise deck (by prizing my Leafeon twice), I bubbled at 9th place.

I then decided, after my good friend Dan got Top 2 in the “Win-A-Box” with his version of Empoleon including Terrakion, that I would give it a shot at Manchester Regionals. I liked its somewhat improved Darkrai and Plasma matchups.

After Manchester, I started thinking that Empoleon was not a good play for Glasgow, and went looking at other decks. After Johnny Hall won with Darkrai/Garbodor/Hammers I decided I would give the deck a chance at Glasgow Regionals.

Before I go into anything, I need to thank Oliver Barnett for helping to create this list.

I had originally played a 4/2 line until the night before when Oliver gave me the idea to try out the 3/3 split. It was worth it and saved me in so many games on the day.

I went for a max count knowing that Plasma is still heavily affected by Hammers. Less people were playing high amounts of Special Energy as well, so the 4 Crushing Hammers made sense.

Absol is too useful in many situations. The 140 damage 1HKOs an Empoleon and with Laser it can take down 170 HP EX’s. It also creates a scenario where I make my opponent take 7 Prizes to win by using a combination of 2 Sableye, 1 Absol, and then finally 2 Darkrai EX.

Glasgow Regionals had the lowest amount of players of the 3 Regionals the United Kingdom has had so far with 26 Masters, 8 Seniors, and 6 Juniors. I sat down at the table and got ready to play!

Round 1 vs. Katie Flower w/ Garchomp/Altaria

I started with Sableye to her Swablu. She went first and couldn’t seem to get anything off an N other than a Gible, and just passed. I started in with a rain of Hammers and got a Darkrai EX fully powered with Garbodor sitting right behind. She wasn’t able to get a Garchomp out fast enough and I out-sped her set up to win Game 1.

I started with a Trubbish and a dead hand, going second. She got a better start this time, with Gibles and Swablus ready. I was able to Ultra Ball for a Sableye, but had to pass. She got the Rare Candy for the T2 Garchomp along with a Gabite’s Dragon Call for the Altaria to KO Trubbish.

I draw to see if I have to go to Game 3… but Random Receiver! I hit a Juniper and was able to set up Absol, Garbodor, and finally Darkrai EX to KO multiple Garchomps to win. GG!

Cake is a amazing guy and we got to play twice during the tournament. I can’t remember these matches as much as I’d like, but I remember how close they were. I got T2 or T3 Garbodor and Cake answered with multiple Tool Scrappers to create a very close game. I think there was some Black Kyurem EX the fray, but the final Tool attachment to Garbodor stopped Cake from being able to win.

Cake got an extremely fast start with a T2 Keldeo-EX doing devastatingly high amounts of damage. I was able to keep it at bay with Lasers and Hammers, but Cake was able to get me down to my last Darkrai EX.

I was lucky at the end; with my 4 Prizes to his 1 Prize, I hit Catcher heads and N to 1 to put an Active Keldeo at 90 and a Benched on at 140. Cake was unable to retreat and I won a extremely close Game 2. GG!

Round 3 vs. Charles Barton w/ Assassinate

Charles was playing an interesting rogue deck that he named Assassinate, consisting of Dragonite PLF and other techs.

Charles went first and attached a G Energy to Dratini. I opened Sableye. He also had to use Jirachi-EX to get his first Supporter (an N), which I believe got rid of my dead hand and gave me a useful one. After Charles passed I began to work out a strategy of that like I’d use against Virizion/Genesect: Hammer-spam + Garbodor.

I began by getting rid of his Energy and Junk Hunting back Hammers and Computer Search that I had been able to use. I repeat this getting 1 heads with 2-3 Hammers for 6-7 turns until Charles scoops Game 1.

I was able to start the Hammer-spam again, but I missed heads on one crucial turn where Charles was able to get a Deafen off. I used Absol for the first Dragonite, then went to a Dark Clawed Darkrai doing 110 + 30 to the Bench. Unfortunately for me this only equated to 140 damage, not the 150 I need. I realized that instead of wasting a Darkrai to a Bangled Dragonite, I should retreat to Sableye and hit the 10 damage I need to create the KOs on Dragonite the turn after.

After two turns of this I broke the lock and Charles scooped up his cards. GG!

Round 4 vs. Sami Sekkoum w/ Blastoise

I was pretty amazed and happy to play against Sami, and it was live-streamed as well.

I get the amazing start of T2 Darkrai EX and T2 Garbodor with Dark Claw attached. Sami had had no Supporter in hand and drew dead, so my Night Spear doing 90 to Keldeo-EX and 30 to Squirtle was only one turn away from winning. Sami scooped up his cards and we were onto Game 2!

Sami got his own perfect start with a Keldeo-EX wrecking through my Sableye and Darkrai, putting him down to 2 Prizes to my 6. I find out that not one but two Garbodor were prized, so I was ready to get destroyed. I was finally able to KO his 7 Energy Keldeo with a mixture of Poison and Confuse Ray from Sableye. He then KO’d the Sableye leaving me with just a Darkrai EX and a Float Stoned Trubbish. (Oh, the irony.)

I was able to get Laser and Virbank, along with D Energy and Claw to Darkrai EX before the N to 4 for me and 1 for Sami. I was able to get 2 Dark Patch to power up my Darkrai EX, and did 140 and 30 to another Keldeo that I could KO next turn if I am able to hit Catcher.

Sami was able to get Skyla off the N for Superior Energy Retrieval, and use Exeggcute as a discard to KO my Darkrai with Black Kyurem to win. Onto Game 3!

I start off with Sableye and am able to get set up while Sami has no Supporter again. I was able to overpower him with 2 Darkrai EX and Garbodor to win the game. GG Sami!

I had nothing, drawing dead for the most of the game until I was able to power up a Darkrai EX with 120 on and N Douggie to 1. He was able to draw a Fighting for the Landorus to win! GG.

Repeat last match however with Douggie getting the dead-draws and me having Hammers and Darkrai EX’s everywhere.

Time was then called so we knew it would be a tie. GG Douggie!

Yep, 1st seed. I was going up against Scott in the T8, who was playing Plasma.

Scott gets a nice start but is forced to do 30 damage with Raiden Knuckle while I Hammer away at all his Energy. I was able to get a Absol and Darkrai EX powered up, with an N to 2-3 while I had catchered up a Deoxys-EX. He was unable to retreat so I was able to KO to win the game.

A repeat of Game 1 with Hammers and Lasers to win. GG Scott!

This version of Virizion/Genesect is consistent, as in over 20 draw outs consistent.

Oliver starts off with the T1 Energy attachment to Virizion, and after benching Genesect passes. I am unable to find a Crushing Hammer to disrupt his setup, so I get D Energy onto Sableye and Junk Hunt. Oliver is able to get the T2 Virizion and uses Town Map to show his G Booster AND Shadow Triad prized, along with a Professor Juniper, Colress Machine, Virizion-EX and Genesect EX.

Oliver then uses Emerald Slash for 50 on my Sableye. I finally get Hammers but with 4 Energy on the field an onslaught began, after Oliver used Emerald Slash again to KO Sableye. I had a Darkrai EX ready now, but was unable to keep up as Oliver was able to get his G Booster off the Prizes.

I start this time, getting Sableye ready along with Darkrai and Trubbish. Oliver gets the G Energy along with some more Genesect EX and passes. I use Crushing Hammer… heads. I play a Supporter, get Darkrai set up, and Junk Hunt. I repeat this for the next 5 or 6 turns with success until I Night Spear to victory.

Oliver starts with basically the same, but then on my turn I get the Hammer heads and Junk Hunt. I miss a turn of discarding Energy, but by that time Oliver has used his Super Rod and cannot win. GG!

Woop, Top 2. Jake had just won his match after a really close next blood.

I can’t remember this game much, but I do remember getting a pretty speedy start and taking the win.

This game goes extremely well for me with Garbodor being set up fast, and Cake being able to answer with a small Keldeo with 3 W Energy. I am able to Hammer away at it until I have a Darkrai EX ready, and I’m able to get magic numbers to bring me down to 1 Prize.

I have 30 on the Blastoise and a Dark Clawed Darkrai EX; I hit heads on Catcher the next turn to win the Regionals. GG! Cake is an extremely good sport and amazing to play against as well.

Glasgow was one heck of a good time. Thanks to everyone who helped organize it, Becca Mander for judging, Douggie for taking me there, Cake for such fun games, and everyone else for creating such a nice atmosphere. Thanks for reading! 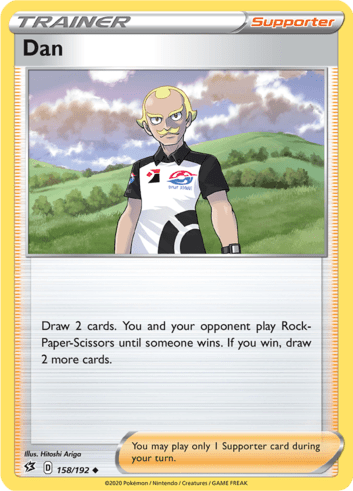