It’s been a while, SixPrizes! Life’s been pretty busy, and with the UK competitive scene being quite slow until a couple of weeks ago, I haven’t had much chance to play. But I’m back with an article, this time on Dusknoir BCR.

At first glance, Dusknoir is a Stage 2 Evolution card with a terrible attack, high retreat, and pre-Evolutions that don’t offer much at all. What is it that makes Dusknoir good then? The reason is because it possesses what is, debatably, one of the most powerful Abilities currently in the game.

Dusknoir’s Ability, Sinister Hand, allows you to move any damage counters on your opponent’s side of the field around their Pokémon in any way you like (during your turn). At first glance, this Ability doesn’t do anything that potent: it doesn’t allow you to attach extra Energy in your turn and it doesn’t actually put any damage down on the field. So why is it so good?

1. It allows you to effectively attack any of your opponent’s Pokémon.

Moving the damage counters allows you to put the damage on whichever Pokémon you like. This means that any walling or stalling strategies that your opponent tries to use on you by just placing a Pokémon up as fodder likely won’t work, because you can just move the damage elsewhere.

Allowing to damage any of your opponent’s Pokémon means that your opponent could spend a few turns trying to set up a Stage 1 or Stage 2 Pokémon on their Bench, only to have Dusknoir move damage onto those Pokémon and KO them before they can evolve.

Another situation where this may come in useful, though less common in the current format, is when your opponent is trying to stack Energy onto one of their Benched Pokémon; if you have enough damage on the field, you can move it all and KO that Pokémon before it has a chance to attack.

2. It allows you to make use of all damage done to the opponent’s Pokémon.

What this means is that if you were using an attack that did, say, 120 damage, and the opponent’s Active Pokémon had 180 HP, you would need to use the attack twice to KO that Pokémon. However, this means you are “wasting” 60 damage, as two attacks doing 120 damage would equal a total of 240 damage, which is 60 more damage than you needed, which is just going to be wasted. You can use Dusknoir to move this damage to the Bench and essentially save this damage.

In one situation, the little bits of damage “saved” may not seem like a huge amount. However, in a game, saving 30, or even 20 damage really adds up, and means you can take a lot of cheap Prizes on Benched Basics against evolution decks, or use it those times you need that 50 damage to KO the Active.

3. It lets you take your Prizes whenever you want.

While not a huge benefit of Dusknoir, this point isn’t to be understated. Being able to take Prizes when you want, rather than when the damage adds up, is big in a format where N is such a powerful card and can punish you for taking Prizes too early on.

If used in conjunction with Town Map, you can even choose which Prize you need and when; for example, you may need a Double Colorless Energy on this turn to swing the game in your favor. You don’t hit any off your Supporters, but you know one is Prized through searching your deck. You can then use Town Map, take a cheap Prize through Dusknoir, and have that card exactly when you need it!

The power of this effect is most commonly seen in lock decks. Not taking Prizes means that the deck becomes less succectable to N knocking down a hand, making locks much easier to sustain.

4. It allows a near complete status lock to be created when used in conjunction with Paralysis inflicting Pokémon.

In this circumstance, Dusknoir works by moving the damage to the opponent’s Bench so that their Active is never KO’d. Using cards that cause Paralysis means that the opponent will never have an opportunity to attack.

When using a deck that uses Paralysis to stop the opponent attacking, the only time the opponent can attack is when you can’t keep Paralyzing them, or when their Active is KO’d. While Dusknoir cannot help the former problem, it completely removes the latter problem by never letting the Active be KO’d.

While these four reasons are all very good reasons why Dusknoir is good, why, and when, should you use it? Dusknoir is mostly effective in decks that either have a lock of space, such as Darkrai variants which can be adapted to include Dusknoir, and decks that already run Rare Candy, so a thin line of Dusknoir (such as 2 Duskull, 1 Dusclops and 2 Dusknoir) can easily be slotted into that deck.

An example of such a deck is Empoleon, in which Empoleon can often be hitting for 110-130 damage through use of Silver Bangle, meaning a lot of that damage would be wasted if not for Dusknoir.

The other type of deck to put Dusknoir in is a lock deck where it would help create a complete lock; the most commonly seen one uses Mew-EX to copy Accelgor DEX’s Deck and Cover attack to Paralyze the opponent, Gothitelle LTR to stop the opponent from using cards such as Switch to get rid of the Paralysis, and Dusknoir to help keep the lock complete.

Why wouldn’t you use Dusknoir?

Judging from those reasons given, the card seems powerful enough to fit into any deck! However, there are several reasons why this can’t be done. The main, sadly, is deck space: many decks can’t justify the 9-12 spaces filled by Dusknoir, Rare Candy, and additional search cards needed to make it work.

Another reason is some just don’t need it. For example, Blastoise BCR decks that utilise Black Kyurem-EX PLS as a main attacker are KOing every Pokémon in one shot anyway, so Dusknoir wouldn’t be of any use.

While not as relevant as it was when Pokémon Catcher didn’t have a coin flip, the opponent can still try to bring Dusknoir into the Active Spot to buy some time due to its high retreat, and Darkrai EX based decks can abuse Dusknoir’s weakness to Dark-type by Knocking it Out in one shot.

As a summary, Dusknoir is a very powerful card in the current format due to its Ability, however it has enough limitations to make its uses deck-specific.

I’d like to ask for requests for the next Card Commentary to be posted and discussed in the comments! The best suggestions would be cards that aren’t talked about in every other article, but are cards with a lot of interesting potential. 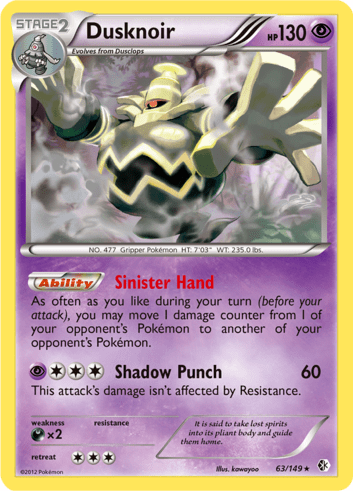