Hey SixPrizes! I’m going to be talking about an old favorite deck of mine today, as I think it now has the potential to do fairly well at City Championships and onwards.

The deck is based around Hydreigon DRX 97 using its Dark Trance Ability to move D Energies (as well as Blend GRPD and Prism Energies) between your attackers an unlimited number of times per turn.

This works well with Max Potion as you can move all of your Energies off of your attacker, heal it, and then move the Energies back again. That, in a nutshell, is the basic concept behind of the deck. There are however a multitude of different ways to play the deck and I’m going to discuss a couple today.

To start off, I’m going to share a skeleton list which I will use for all the different variants that I’m going to discuss.

This list is a very bare version of the deck with just the necessities (in my opinion) of most versions of the deck. With a decklist with just the bare bones like that you certainly won’t be winning any tournaments so what cards best fill the space?

Latias-EX has seen virtually no play since its release as far as I am aware and Sigilyph DRX hasn’t been seen for a while either. So you might be wondering what has changed now to make these cards such viable options for the deck?

Most decks which I have seen achieving success have cut all their Pokémon Catchers, and although some have found replacements in the form of Genesect EX and Ninetales DRX they are less consistent and not commonly used outside of a few decks.

With this being the case if one of these cards is in the Active Spot then it’s probably going to stay there until it gets Knocked Out or you retreat it out. This is incredibly powerful for any card which can prevent a large amount of the opponent’s deck from being able to attack it like these two and a handful of other cards can.

If the opponent can’t attack it with their main attacker, they are either forced to attack with a less optimal attacker, which is damaging their strategy and probably slowing down their game for at least a couple of turns where you can be applying extra pressure with their attacks.

Obviously if Latias-EX and Sigilyph DRX weren’t actually stopping any popular cards from attacking it then they wouldn’t be very useful, so much of the success of these card is based on the metagame. For each of these cards I have listed just a few fairly popular cards which are unable to damage these two:

Major disruption to the following decks:

As you can see that is almost every competitive deck right now that is doing well. While the cards certainly won’t win the matchup on their own they are very useful in all of these matchups and really put a strain on the opponent and their resources.

Entei-EX offers a nice counter to Virizion-EX/Genesect EX decks and can, alongside other attackers such as Latias-EX and Sigilyph DRX, really make this matchup very strong in our favor. The only things that really cause problems for us are G Booster and Tropius PLB (which isn’t too much of an issue anyway because we can easily KO it).

Basically Entei-EX’s one use in the deck is its second attack, which can 1HKO the opponent’s Genesect EX and quickly finish off the rest of their attackers, because without a heavy discard from G Booster they can’t get a 1HKO back and they will run out of Energies first.

As mentioned above, G Booster is one of the only ways that Virizion-EX/Genesect EX has a decent chance against this deck. It can break any Safeguard lock and 1HKO EX’s before they can be healed with Max Potion, not to mention remove Energies from our board and slow us down.

If Virizion/Genesect is really big in your metagame then I would say this is a pretty good tech, but if it’s not that much more popular than the other top tier decks then I wouldn’t play it as there are plenty of other options available.

I’m grouping these together as they fulfill a similar purpose in the deck. Their basic function is to take advantage of Dark Trance and grab a big Knock Out late game on an opposing Mewtwo EX (or Deoxys-EX) and finish off the game.

They have a few other uses as well. Cresselia-EX’s self-healing Ability is useful when you have run out of Max Potion and is also a good card to stall behind for a couple of turns while setting up.

Mewtwo EX, on the other hand, is great because it can hit for unlimited amounts of damage (limited only to the number of Energy attached to it), so it’s great for finishing off a big EX for the last couple Prizes. Whether you decide to play them or not they are both fairly useful attackers for the deck in different situations.

This deck can sometimes struggle against Darkrai EX/Garbodor DRX decks, so this can act as a surprise attacker alongside a Tool Scrapper to turn the whole game on its head. If the opponent Knocked Out something the previous turn then just a single Prism Energy and a D Energy will return the KO on a Darkrai EX.

It’s important to note, though, that this card cannot use the same Blend Energy as the rest of the attackers in the deck use, so you will need to use Prism Energies or basic F Energies to play Terrakion.

This is a staple in virtually every deck right now and for good reason. Preventing your opponent from being able to hit the Bench with attacks dramatically reduces the damage output of attackers such as Darkrai EX, Landorus-EX, and Kyurem PLF.

With the main attacker being able to heal off with Max Potions, the opponent will often rely on Bench damage to run you out of Max Potions quickly, but with Mr. Mime on the Bench this is no longer an issue.

Having a non-EX attacker that doesn’t hog up lots of Energies and force a discard can be very useful, in particular when facing an opponent’s Safeguarder. I don’t currently play it because of the lack of these cards in my own metagame at the moment, but if they get popular it will be an easy addition.

The major problem which I see with Absol PLF is that it doesn’t really work well with the strategy of the deck because it is very flimsy and can be taken out with a single attack relatively easy.

This card has fallen out of favor in this deck of late, but it has several useful purposes. It’s great for taking out a powerful Dragon-type EX card like Rayquaza EX or Black Kyurem EX in the late game, something which no other card in the deck can reliably do.

It also, more importantly, has an attack which can pass through effects on the Defending Pokémon such as Safeguard which enables it to 1HKO Sigilyph DRX and damage Suicune PLB as well.

These cards are both options for hitting magic numbers with Hydreigon and Darkrai EX. A Night Spear snipe with Darkrai puts a Kyurem PLF into knockout range with a Night Spear + Dark Claw, and two Bench snipes can take out a 170 HP EX after hitting it with a Claw’d Night Spear.

Silver Bangle is probably even more useful, though, as it enables Hydreigon to Knock Out 170 HP EX’s in one hit such as Genesect EX, Keldeo-EX, and Rayquaza EX. Whether you play it or not depends on the variant of the deck and how much focus you put on Hydreigon as an attacker, but it’s certainly an option to bear in mind.

Anyway, those were all the interesting techs I wanted to talk about. I am changing my list all the time, but at the moment, looking at the current metagame, here is what I am going with:

This is always a tough section as there is so much variation between opposing lists, and this list is very versatile — so it can be teched against certain matchups. Obviously this is going to be very subjective, but in my opinion with this list the matchups fall roughly as follows:

You might be surprised that this is another positive matchup, considering that this deck was the one which almost finished off Hydreigon when Plasma Storm was released.

Between Sigilyph DRX and Latias-EX, you can shut off all their attackers, though, meaning that without Pokémon Catcher anymore the game appears almost unwinnable.

Latias-EX is the star of this game. If it’s prized or Knocked Out, the matchup can be quite difficult. However, if it can be put in the Active quickly, the opposition won’t be able to use Empoleon to get any damage on the board at all.

The one thing to be careful of is not to load too many Energies onto the field so that their Leafeon PLF can take advantage. As long as you don’t do this, you can heal off the damage with Max Potions, and once you get rid of a couple Leafeon, the game will normally be over.

This is a fairly strong matchup for us, as Latias-EX and Sigilyph DRX are both great counters to the two main attackers in the deck. The two big problems are that they can use Red Signal to break the lock and G Booster to 1HKO EX’s and remove Energies from play.

If this deck is dominating your metagame then adding a Spiritomb PLB is definitely a great call and probably makes this matchup closer to 70/30; it’s really that good.

This matchup depends a lot on the opponent’s list because if they are using multiple Rayquaza DRV and Reshiram LTR, then the matchup is actually very tough. Rayquaza EX can easily take care of Darkrai EX, and Sigilyph DRX and Latias-EX aren’t very useful at all against those two non-EX attackers.

This variant (and most variants) of the deck really struggle against any decks that block off Abilities as this deck is almost totally reliant on them. Tool Scrappers help, but the opponent can attach Tools on their turn and break through Safeguard locks.

Hammer-spam versions are probably the worst opposition to this deck, as it runs half Special Energies, so Enhanced Hammers destroy the deck.

If this deck is very popular in your area I would either recommend not playing Hydreigon at all or playing a couple Terrakion LTR and basic F Energies instead of the Prism Energies and a couple other attackers.

Thanks everyone for reading this article, and I hope that if you haven’t considered testing out this deck already then you will give it a try, as it has a high level of versatility which can be tailored for almost every metagame.

I would be very interested to hear any other suggestions that you have for altering this deck to beat certain matchups, and if you have any other comments or questions I will be happy to answer them. 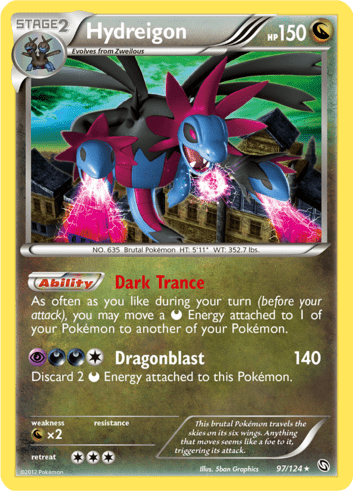