It’s finally time for the holidays! It’s the time of City Championships, Winter Break, and (hopefully) getting good cards for Christmas! Today I’m going to tell you the tale of my first ever top cut at a tournament, with a deck that I had never played before!

I was talking to some of my friends on Skype while asking for help on my Darkrai/Garbodor list, as it hadn’t been going great for me. I felt completely unprepared for the tournament the next day, like my deck would completely crap out on me. I expressed my concerns to my friends, and they recommended a new deck to me: Snorlax/Lugia, aka the Yeti.

I was skeptical (as I had never heard of it before), but when they gave me the list, I realized I had every card for it, except for two Lugia and a Colress. I quickly arranged a deal to borrow those cards, and then built the list:

While I didn’t make this list, I understand it and can give my opinion on the decisions in this list.

These are the heavy hitters of the deck. Snorlax blocks opponents from retreating, and completely destroys Darkrai-based decks that don’t run Garbodor. It also has 1HKO potential on pretty much anything, as Teampact can hit for 180 with a full Bench (which is not actually that hard to do, even with the high Energy cost).

Lugia gives the deck huge potential for taking leads in Prizes, especially on EX’s that have been softened up by a Raiden Knuckle.

Thundurus will destroy Empoleon decks if they don’t run Sawk PLB, and that’s always nice. It also accelerates Energy from the discard pile, which makes it perfect for Lugia and Snorlax. The third thing that Thundurus does is deal the 30-40 damage that gives Lugia a good chance at 1HKOing EX’s with Plasma Gale.

Running Deoxys is pretty much a necessity for any Plasma deck. Adding damage, especially to Plasma Gale, is fantastic.

Pokémon Catcher takes too much space, and is flippy. Genesect is much better, as it also counts for Teampact. Genesect also makes you play carefully with your Plasma Energy, which is always good practice for playing the game.

To be honest, I never played this card once, but I didn’t need to. It is used to help Lugia score 1HKOs on undamaged EX’s in the later parts of the game.

When your main attackers have a 4 and 5 Energy attack cost, Scramble Switch is the obvious choice. I don’t really see an argument that could justify any other ACE SPEC.

You want to win Stadium wars against Beach and Virbank. Running 3 Frozen City is the best way to do it. Frozen City helps both the RayBoar and Blastoise matchups a lot.

I got to the venue in Lynnwood, WA a little bit later than I expected, due to a traffic jam, but I got there before registration anyway. I got the Lugias from my friends, and traded a Reverse Holo Skyla for two Colress.

I tried to play one practice game with the deck, as it was too late the night before to test, and the deck didn’t go so great. I had all my Snorlax Prized, as well as 2 DCE. I was a bit nervous after that, but since I had already turned in my list, and the pairings were up, I had to stick with it. The tournament was 5 rounds of Swiss with a Top 8 cut.

I was a bit nervous before this matchup, but I felt like I’d be okay, with a little luck. I opened a Thundurus to his Sableye, and he went first. He then proceeded to get quite possibly the best start I had ever seen: a Sableye Active; 1 Darkness in the discard; 2 Darkness and a Dark Claw on his Benched Darkrai; as well as a second Darkrai, a Mr. Mime, another Sableye, and a Duskull.

Needless to say, I was more than a little nervous. I drew, attached to Thundurus, Benched a Snorlax, Deoxys, and Lugia, attached a Lightning, and played Colress for 8 cards. I then played Ultra Ball to grab a second Lugia, in the process discarding a DCE, and used Raiden Knuckle for 40 and attached the DCE to Snorlax.

He wasn’t able to get the Night Spear, so he just drew, attached to the Active Sableye, evolved his Duskull to a Dusclops, retreated to the two-Energy Darkrai, and passed. I retreated into Snorlax, Benched a Genesect EX, attached a Plasma Energy to Genesect, and used Red Signal to drag out the Dusknoir, knowing that he probably didn’t run Switch.

Fortunately, he didn’t hit any Hypnotoxic Laser while my Snorlax was up, which would have hurt a lot. I then slowly charged up my Snorlax, and put a L Energy on Thundurus while he was locked with Dusknoir Active. He grabbed his third Energy for his Darkrai, and started to charge up another.

At that point, I realized that I needed to Knock it Out, or I would still be facing an uphill battle for the later parts of the game. Fortunately, I topdecked a Colress for 10 and drew a Plasma Energy out of the 3 that I had left in deck. I attached it to Genesect, and used another Red Signal to drag out the fully charged Darkrai, and hit it with a Teampact for 190. After that, I swept him.

He opened with a bad start, and I started Thundurus. He never got an Empoleon up the entire game. It turns out he never hit a Supporter.

I was honestly surprised to be doing this well, as I had only played three games so far with this deck. I learned a bit before the match that my opponent was playing RayBoar, which I had no idea how to play against. I asked James Good (who gave my friend the list, who gave me the list) how to play the matchup, and he said “Get your Frozen Cities up.”

I had 2 Prized Frozen Cities, as well as my 1 Skyla. I did get a turn 1 Plasma Gale, however, but aside from the 2 Prizes I took from that, the game fell apart quickly. Also, my opponent was really, really good. When I did get my Frozen City out, he got rid of it for a Beach, and then attached all of his Energy in a super-strategic way, in case I got another out.

One thing that I noticed in this match was that it was my only match that went to time, even though we were both running fast decks. I think it might have been because my opponent played really, really slowly. I was going to call a judge for stalling on him, but every time I was about to ask him to pick up the pace, he started to make moves.

He decided to go first, and opened a Thundurus EX with a Lugia Benched. He then proceeded to use two Team Plasma Ball and two Ultra Ball (with a series of Bicycle) to grab four Deoxys-EX, discard a DCE with Juniper, and attach a Plasma Energy to Lugia.

I then got an equally great setup, hitting a full Bench and playing a Colress for 10 cards and almost hitting a T1 Plasma Gale. My memories of this game are a bit fuzzy, but I remember three specific moments of lucksacking: I needed to Knock Out his Lugia, but needed 2 Energy on my Snorlax, a way to switch my Energy-less Lugia out of Active, and a Plasma Energy to attach to Genesect EX to Red Signal his Lugia and Knock it Out with Teampact. I Colress for 10, and draw 2 Colress Machine, a Plasma Energy, and a Switch.

My second lucksack was hitting a Skyla off of an N, which grabbed me the Scramble Switch, which let me use Plasma Gale for a KO, leaving me with 1 Prize. However, my opponent still hung in there by making clever use of Reversal Trigger (I discarded my Tool Scrappers because I didn’t think I would need them) to grab the cards he needed to stream Lugias.

He Knocked Out my Snorlax and Lugia to take 5 Prizes, and played N to bring me to one card, which was a rather unhelpful Switch. I had to bring up my one-Energy Genesect on turn 1 of time, knowing that he could very easily win the game, which would have frustrated me to no end. I then had my third lucksack moment: I topdecked one of my three L Energy that were left out of my 20 card deck, switched into Thundurus, attached the Energy, and Raiden Knuckled for game.

I looked at the pairings, and saw that I was up-paired to play the only 4-0-0 in the tournament. We decided to intentionally draw, as we would both make cut if we did.

I learned a bit earlier that my opponent was playing Empoleon, which is a great matchup for me, as Thundurus wrecks their entire board. Of course, both of my Thundurus were Prized. He also got two Empoleon up on turn 2. I scooped relatively quickly.

I elected to go first, and hit a turn 1 Plasma Gale, but I saw that 1 Thundurus is Prized. I took 4 Prizes by turn 3, and put 20 on all his Piplups with Frozen City. Then, he promoted Empoleon and attached a Silver Mirror. I had two ways to win: hit one of my two Tool Scrappers, which were not Prized, or hit a Shadow Triad to Red Signal a different Empoleon.

I played Colress for 8 cards, and still whiffed. I never saw that Scrapper, and he slowly Knocked Out my Lugias and other cards, until he had 2 Prizes left. He needed to deal 20 extra damage to KO my Thundurus for game, and he drew his last 2 cards with Diving Draw to pick up his Iris. My opponent (his name was Ethan) wound up winning the tournament.

I am honestly surprised that I was able to get this far in this tournament. I was aided by plenty of good luck, but I feel like I also made a good deck choice. If I hadn’t Prized my Thundurus Game 1 of Top 8, I had an out to them on turn 1, and I feel like it wasn’t that far out to expect to hit either of my Tool Scrapper out of 3 Colress for 8+ cards out of a 25 card deck, but I’m still amazed that I even got that far.

This was my first top cut ever, and I feel like I did well. I don’t really have any sour grapes other than the Scrapper and Thundurus whiff, and I feel like I played well enough. I will definitely be running the Yeti again for next week, and I hope that I will do well again. 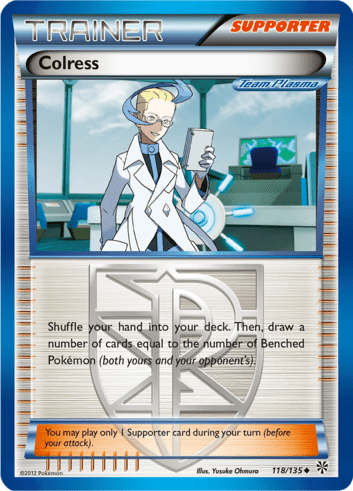