Hey there SixPrizes! Thanks to the winter holidays I’ve finally had time to play this game again. I’m sad to have missed so much of an awesome format, but I’ll at least get to play in one City Championship tomorrow, and will be trekking to Oregon for Regionals (for both TCG and VGC). Recently the only articles I felt comfortable writing were XY set previews, but today I finally feel like I can discuss a topic relevant to the current format.

Today’s article is going to be on three fun techs and which decks they can be used in most effectively.

Spiritomb has 80 HP, 1 Retreat Cost, a hand refresh attack “Hexed Mirror” for C, and most importantly a unique Ability. Spiritomb’s Sealing Scream prevents either player from playing an ACE SPEC down while Sealing Scream is in play.

Pooka discussed Spiritomb on The Top Cut over a month ago. So as not to be redundant, I’ll provide a quick recap of the key points for anyone that hasn’t read that article.

Spiritomb prevents VirGen from playing G Booster, and Darkrai from using and reusing Dowsing Machine via Junk Hunts. Hexed Mirror is nice to have as an out to not having a Supporter (but Jirachi-EX is far better at this, not to mention Mew BW98).

There are a couple subtle points I’d like to add to Spiritomb’s usefulness. Obviously at any point in the game where you’ve used your ACE SPEC and your opponent hasn’t, Spiritomb can hit the Bench and be an annoyance. ACE SPECs, no matter which one, consistently make the difference in games. One of the greatest strengths of Spiritomb is preventing your opponent’s extra “out” to that clutch card. Shutting down Computer Search or Dowsing Machine can prevent your opponent from searching that clutch anything, or using that Super Rod/whatever 1-of they were forced to discard earlier.

See… that’s my problem. Spiritomb is powerful, but if your opponent can use their ACE SPEC before you use yours (which is a 50/50 situation), then it’s a dead card. I don’t think the hand refresh is enough.

My conclusion, however, is that Spiritomb is still undoubtedly good. Taking a quick look at TTC’s Cities results, the deck Spiritomb helps most against (VirGen) is also the deck that has the most Top 4 finishes. So… if your deck has a problem with VirGen, Spiritomb is a legitimate consideration as a tech for the matchup.

The deck that comes to mind most immediately for me is Darkrai. Night Spear and Megalo Cannon are essentially the same attack, but Night Spear has better numbers on its side. As such, Darkrai has the advantage against VirGen if the decks duke it out hit-for-hit. Unfortunately, VirGen has G Booster which can completely negate Darkrai’s attempts to set up a response KO with a fresh Darkrai. And once G Booster hits the field, you’re left reeling for the rest of the game. Even if you Scrapper it, they can Shadow Triad for it back and fire again.

So Spiritomb seems like a fit in Darkrai. The only shame is that the other most prominent use of Spiritomb is to counter Darkrai. As such, Computer Search seems like it may be the better ACE SPEC for a Darkrai deck to play teching Spiritomb. It’s more likely to be used as soon as you get it, meaning you can bench Spiritomb soon after and get the advantage out of it against other decks as well.

I don’t see Spiritomb being a great fit in many other decks though. If the deck has Bench space, and uses Computer Search as an ACE SPEC, then I can see Spiritomb working. But keep in mind it might also be competing with staple techs like Mr. Mime PLF for that slot on the Bench.

Ah… how the mighty have fallen.

1950’s Educational Film Narrator: Would YOU flip for a gust effect?

Jimmy: Shucks no mister! If I drop Catchers I’ll have room for my super secret fantastic Spiritomb tech!

1950’s EFN: Now hold your horses there Jimmy my lad. You may be missing something.

1950’s EFN: Let me take you on a fanciful journey through the wonderful world of Pokémon TCG! #NoOakJoke

You see Jimmy, Pokémon Catcher may require a coin flip, but you really have to ask yourself: “Do the benefits outweigh the costs?” If you could win a game you would otherwise lose if you got a ‘heads’ on your coin flip, would that be worth it?

So what have you learned Jimmy?

Jimmy: I learned that two tech Catchers in a deck like Blastoise would be a really strong way to shut down my opponent’s plans! And that Blastoise is a natural choice because it always has the potential to 1HKO, which means my tech Pokémon Catcher is more likely to be useful immediately as I get it in hand!

1950’s EFN: It sounds like you’ve learned a valuable lesson my lad! But don’t forget, you could also use that Pokémon Catcher on an opponent’s Blastoise to shut them down for a few turns.

Jimmy: And I could use it in RayBoar as well!

1950’s EFN: That’s right! It’ll be a cold day in Florida when RayBoar is a better play than playing Blastoise in NXD–LTR. Now run along lad…

This last one is a more quirky tech. You may have heard of the Big Basics/Garbodor deck running Chandelure-EX. If not, be sure to check out John’s great UG article which covers the deck along with many other competent rogues (two of which he piloted to a Top 8 and Top 4 finish).

Either way, the important part about Chandelure-EX as a tech is that it can drop 4 damage counters as it likes on your opponent’s Pokémon for P. Any deck running Prism, Blend GRPD, or Psychic has the chance to take advantage of Chandelure-EX.

The key to this tech is to finish off damaged Pokémon that retreated to the Bench. Most importantly, Chandelure gets past Mr. Mime’s Ability, which means your opponent isn’t actually safe sitting on the bench with only 30 HP left.

Additionally, 2 turns of Cursed Drop is 8 very effective damage counters placed. If you go 2nd, and start Cursed Dropping on your first turn, those 8 damage counters could very well make the difference in setting up KOs for later in the game, or even just sniping out a lone Squirtle on the Bench that failed to evolve.

On the off-chance you actually have to attack with Chandelure, there are worse attacks than 70 plus Burned and Confused. There are certainly better attacks, but it can at least do something.

So the question is… what deck would Chandelure-EX work best in? The first consideration is what decks can Chandelure actually be teched into. Well… Big Basics/Garbodor is an obvious fit, but you could tech Chandelure-EX into decks like Darkrai/Hydreigon, Tool Drop, Ho-Oh, Flareon builds or to take another page from John’s UG article, Gothitelle/Gardevoir.

The second consideration is which deck(s) might appreciate the ability to place small amounts of damage to close out games? From the above list, I can see it working well in its own Big Basics/Garb deck, in Darkrai/Hydreigon, and Ho-Oh.

Hydreigon is mainly a fit since it allows you to bypass Mr. Mime and set up KOs. If necessary, it’s easy to Eerie Glow as well. Ho-Oh is a very reactionary deck. As such, your opponent can play around its damage outputs to fall just shy of 1HKOs. I haven’t tested Gothitelle/Gardevoir much, but Chandelure offers a unique chance to snipe out any missing damage for the game.

As an off-handed mention, Chandelure might make for an interesting Flareon tech, allowing Flareon to KO sooner by dealing precise damage quickly. You could tech it into Plasma, but Genesect is the better tech (though Chandelure gets around Garbotoxin).

Either way, it’s interesting as food for thought!

So there you have it! There are plenty of staple techs in the format right now that I didn’t talk about, like Mr. Mime or teching a Lugia into VirGen, etc… My goal today was to discuss some less obvious inclusions that may have what it takes to be worth the deck space.

Be sure to check out TcgWithHats.com this coming week; we’ve got a double Cities-winning tournament report going up soon. 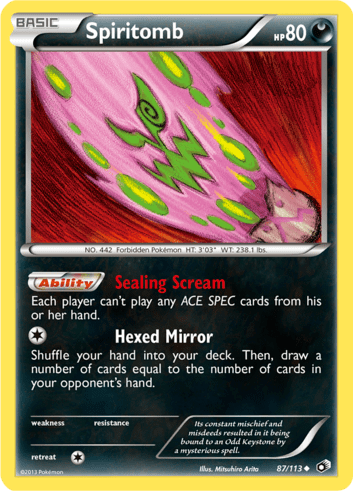