It has been awhile, SixPrizes. It is almost a year since my last article, and my last season ended at Malaysian Nationals with Plasma Klinklang, losing in Top 8. Since then, I’ve relocated to Wollongong, New South Wales, and the lack of a League there made it difficult to continue being competitive. Returning to Malaysia in December for a short holiday made all the difference as I’m now back in Premier Events, albeit only for a short while before returning to Australia.

I must admit that I did barely any playtesting at all during these few weeks, and was certain the only decks I could play would be whatever I could build using the majority of cards from my Nationals cardpool. At South East Asia Regionals I played a rogue Ho-Oh deck crafted by a friend of mine (Jit Min from Singapore), going 3-0-3 and whiffing cut on resistance. I hadn’t played a single game with the deck before the tournament, and I definitely was satisfied with the end result. Plus, it had Ho-Oh. For more on my dance with the fire bird, do check out my previous articles here and here.

What I want to introduce to you today is deck that I feel is as fun to play as it was to build: Klinklang/Reuniclus.

Wandering around on the 6P forum, I came across a post by user stmlacek1 who proposed an idea of using Reuniclus DRX with Klinklang PLS to tank through non-EX damage, and clearing it off with Max Potion. Taking the idea, I modified the concept a little and made quite a few changes to the list from the forums. This was the list I used at Cities:

My original list is around 10 cards off this one, which Jit Min helped edit the night before Cities. So with not much experience whatsoever, I showed up the next day and went straight at it.

Round 1 vs. Danny (Virizion-EX/Genesect EX)

I lose this match in two straight games. Barely taking any Prizes, I just could not get the deck rolling with enough Energy attachments, and once G Booster was on the table there was nothing much I could do, even with Scrappers.

Izmir is a great friend of mine and we were not sure what to make of meeting in the early rounds. Game 1’s turning point was in the first few turns, when I lost a Plasmaklang after stranding it in the Active. I could not come back as his field was just flooded with Energy. Game 2 I tried stalling out his deck for the win, but a Switch was all he needed to bring out his Snorlax to one-hit anything I had one the field.

I wasn’t having the best of days after two one-sided matches with nothing much to talk about, and considered dropping so that I could leave early. However, my third round opponent never did show up anyway, so I took the free win and concentrated on finishing with a positive record at the very least.

Round 4 vs. Zhen Wei (Virizion-EX/Genesect EX)

It is never thrilling to face this matchup again knowing it takes only one card to derail the entire deck, but Zhen Wei is a good friend and we have met previously in tournaments before, so the games we had were fun-filled ones.

In Game 1 my deck finally clicked, and I had an absurd start with Klinklang on the field early followed by a Reuniclus. I was weary of the G Booster and was relieved when he scooped 10 minutes into the game, revealing the ACE SPEC to be prized.

In Game 2 I ran hot getting my Stage 2’s out once again, and this time his deck search signaled me to believe he indeed had the G Booster ready. He also dropped a Bouffalant DRX, and I proceeded to spread my Energy onto 2 Cobalion-EX and a Cobalion LTR, after seeing him drop a tonne of Energy onto just one Genesect EX.

While I slowly chipped away at his EX’s using Righteous Edge, his Poison damage from Hypnotoxic Laser was starting to add up, which I had to continuously swap off to my Bench with Reuniclus. We were both caught in a stalemate with hands clogged with Junipers and tonnes of useful stuff.

Eventually he N’d us, and seeing that he already used all four of his N’s, I played it safe in keeping my already thinning resources. When he finally had the G Booster + Red Signal combo, he took out my Klinklang, only for me to drop another the next turn and Scrapper away the ACE SPEC. A few turns later I was down to a single Prize, and he called the ‘GG’.

Round 5 vs. Kian Meng (Blastoise/Keldeo-EX/Lasers)

This chap travels hours from another state just to play Pokémon at the league in Bangsar, and is one of the most fun-loving in the community. Both games proceeded almost exactly the same way: I got off to a hot start with both Stage 2’s coming down one after the other, and he tried to get his Blastoise powered up. Reuniclus and Max Potion ensured I didn’t lose any Cobalion-EX during the games, as he hit me for only around 80 to 100 damage each turn.

He played an awkward build with Lasers and Virbank, which did add more damage to my side of the field, but he could not find enough Energy to stream enough Blastoise.

Looking back, I do not think there was much I could do in terms of changes to the list. The meta was filled with Virizion/Genesect and that matchup clearly just swings on G Booster and any non-EX attackers they run. I was fortunate to not have met any anti-EX decks (Terrakion/Suicune, etc) and Garbodor, although I don’t think my matchups were all that bad against them.

On a side note, Reuniclus DRX is just such an underrated card at the moment. A tonne of hype has gone to Dusknoir BCR, but damage manipulation works both ways. With Catcher being nerfed I expect tankish decks to come back, and hopefully XY brings back even more Evolution decks and strategies.

In the end, I finished 13th and won two packs of Plasma Freeze for my trouble, so it was not too shabby of a day. While I definitely did not do enough testing with the deck, I believe it to have some potential somewhere, and I thought of getting it in the limelight somewhat for others to try and tweak it for it to improve. I will in time get back to the long days of testing and will report back with further details on the viability of “Jailbreak.” Yup, that’s my current pet name for a bunch of metal gears and squishy cell-like blobs.

Thanks for reading and be sure to leave a comment below for any feedback you may have for this article and me. Cheers. 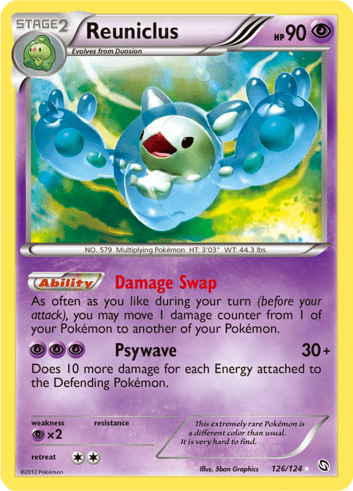